The year began in a weak-to-moderate El Niño, transitioning to ENSO-neutral conditions by July. During the year, each monthly temperature ranked among the five warmest for their respective months on record, with the months of June and July record warm.

The following table lists the global combined land and ocean annually averaged temperature rank and anomaly for each of the 10 warmest years on record.

The year 2019 was characterized by warmer-than-average conditions across most of the global land and ocean surfaces. Record high annual temperatures over land surfaces were measured across parts of central Europe, Asia, Australia, southern Africa, Madagascar, New Zealand, North America, and eastern South America. Record high sea surface temperatures were observed across parts of all oceans, specifically, parts of the North and South Atlantic Ocean, the western Indian Ocean, and areas of northern, central and southwestern Pacific Ocean. No land or ocean areas were record cold for the year. 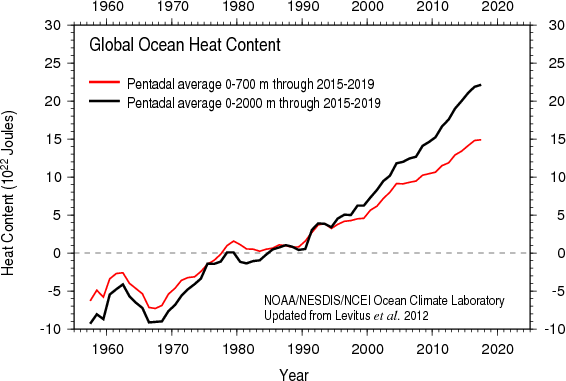 Ocean heat content (OHC), for the upper 2000 meters, for 2019 was the highest in the 70-year record at 228 ZJ (Zeta Joules; 1 ZJ = 1021 Joules) above the 1981–2010 average. The 2019 OHC bested the previous record set in 2018 by 25 ZJ. The five highest OHC have all occurred in the last five years (2015–19), while the last ten years (2010–19) have the 10 highest OHC on record. During 2019, the heating was distributed throughout the world's oceans, with the vast majority of regions showing an increase in thermal energy. The Atlantic Ocean and Southern Oceans (especially near Antarctic Circumpolar Current, ACC, (40°S–60°S) continued to show a larger warming compared to most of the other basins.

The ocean heating is irrefutable and a key measure of the Earth's energy imbalance: the excess greenhouse gases in the air trap more heat inside the climate system and drives global warming. More than 90% of the heat accumulates in the ocean because of its large heat capacity, and the other heating is manifested in warming the atmosphere, warming and drying land, and melting land and sea ice. There are no reasonable alternatives aside from the human emissions of heat-trapping gases (IPCC 2001, 2007, 2013, 2019; USGCRP 2017).

For additional information on the 2019 OHC, please see the paper titled Record-Setting Ocean Warmth Continued in 2019.