In the atmosphere, 500-millibar height pressure anomalies correlate well with temperatures at the Earth's surface. The average position of the upper-level ridges of high pressure and troughs of low pressure—depicted by positive and negative 500-millibar height anomalies on the April 2020 map—is generally reflected by areas of positive and negative temperature anomalies at the surface, respectively. 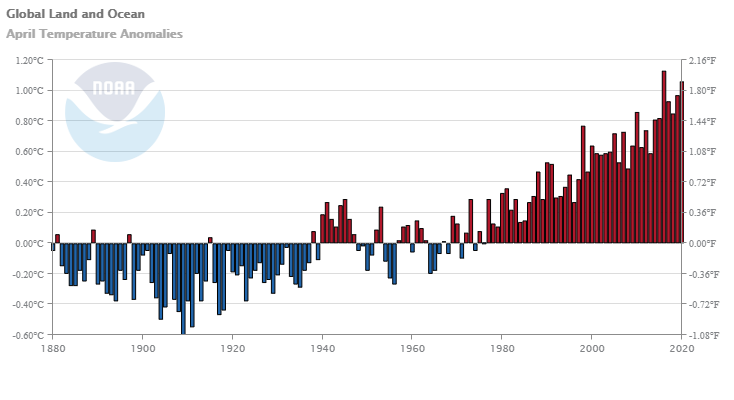 The year-to-date global land and ocean surface temperature was also the second highest in the 141-year record at 1.14°C (2.05°F) above the 20th century average of 12.6°C (54.8°F). This was only 0.07°C (0.13°F) less than the record warm January–April set in 2016. According to NCEI's annual temperature outlook, the year 2020 is almost certain to rank among the four warmest years on record. The global land-only and global ocean-only temperature departures for January–April 2020 were also the second highest on record, behind only the record set in 2016. 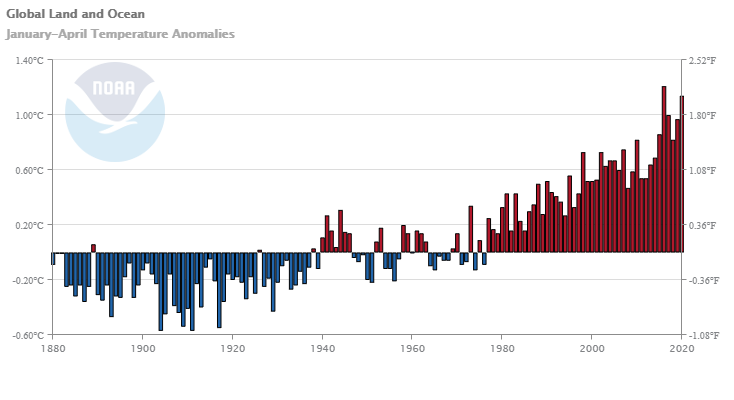 Europe and Asia had their warmest January–April period on record at +2.77°C (+4.99°F) and +3.37°C (+6.07°F), respectively. The Caribbean region and South America had their second warmest year-to-date on record. The maps shown above represent precipitation percent of normal (left, using a base period of 1961–1990) and precipitation percentiles (right, using the period of record) based on the GHCN dataset of land surface stations. As is typical, precipitation anomalies during April 2020 varied significantly around the world. April 2020 precipitation was generally drier than normal across much of the western half of the contiguous U.S., northern, central, and eastern Europe, across eastern Asia, and northern New Zealand. Wetter-than-average conditions were present across parts of Alaska, southwestern and much of the eastern contiguous U.S., western Europe, and western Asia. 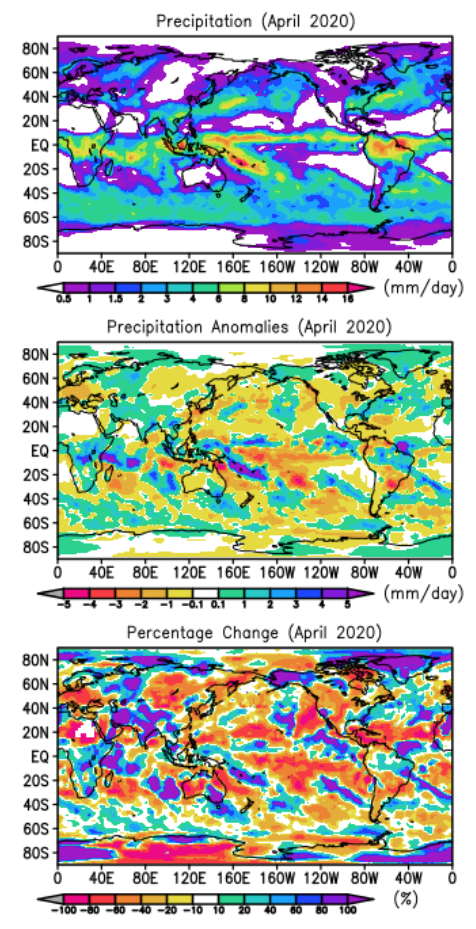 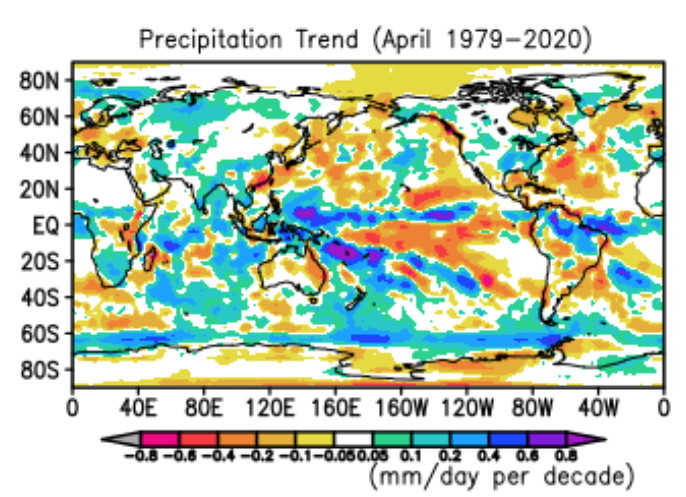 The gradual northward travel of precipitation features following the sun continues for this time of year. In the tropics broad precipitation maxima are evident at about the Equator in Africa, over the Maritime Continent and South America (Fig. 1-top panel). Peak values in these maxima are over 14 mm day-1 or 400 mm month-1. The South Pacific Convergence Zone (SPCZ) stretching southeastward from New Guinea is also very intense. In northern mid-latitudes the maxima originating in eastern parts of China and the U.S. extend northeastward across the oceans. In the Southern Hemisphere the circumpolar maximum at 50–60°S is relatively smooth with weaker peaks than in the Northern Hemisphere. One tropical feature is notable by its absence this April. There is no double ITCZ in the Eastern Pacific, as is usual this time of year. A weak version of the double feature was evident in March, but for April the usual east-west oriented, weaker band south of the main ITCZ is missing (Fig. 1-top panel), but its negative impression can be seen in the anomaly map (Fig. 1-middle panel) from the central to eastern Pacific from 5-10°S at the location where it normally would be.

Large-scale climate conditions, such as ENSO, are approximately neutral, so the tropical precipitation patterns are driven by other, small-scale or regional variations during the month. Across the tropical Pacific tropical cyclones helped provide the anomaly patterns. In the southwest Pacific during the first third of the month, Category Five Tropical Cyclone Harold moved southeastward from east of Papua New Guinea and ravaged the Solomon Islands, Vanuatu, Fiji and Tonga. The swath of strong positive rainfall anomaly follows the storm track. The storm seemingly drew moisture from the surrounding zones producing negative anomalies to each side of the track.

In the Northern Hemisphere the positive rainfall anomaly in the eastern Pacific just north of the Equator was associated with the track of Tropical Depression One-E during the last week of the month. Its definition as a Depression on April 25 marked the earliest formation of a tropical cyclone in the eastern Pacific since reliable records began. Any connection of the first such April cyclone in this region to the aforementioned absence of the double ITCZ is speculation. Some of the positive rain anomalies in the South Indian Ocean are also related to tropical cyclone systems.

This time of year is the rainy season across Equatorial Africa as the seasonal rains shift north with the sun, but this year heavier than normal rains have occurred especially along the east coast in Kenya, Ethiopia and Somalia causing flooding and helping to provide a good environment for breeding locusts which have also plagued the region. Further north the anomaly percentage map (Fig. 1-bottom panel) shows heavier rainfall than climatology in normally dry areas across war-torn Yemen and covering most of Iran; both areas endured floods during the month. Over South America the Amazon had excess rains and the dry zone to the south continued for a third month. Australia was generally dry also, except for the southeast corner and the northern shore which was affected by tropical systems.

Europe was generally dry in April, except for the Iberian peninsula. Over North America the southeast and mid-Atlantic U.S. was wet, while the north central U.S. and most of Canada were drier than normal. A small, wetter than normal feature was centered over southern California, right in the midst of the very large negative precipitation anomaly over most of North America and extending into the Pacific off the U.S. west coast.

Regional precipitation trends over a long period must be related to anomalies during that period. For April the trend map (Fig. 2) and the anomaly map (Fig. 1-middle panel) seem to have a positive correlation with some, but not all, features agreeing in sign. For example, the large-scale features in the tropical Pacific and tropical Atlantic have somewhat similar patterns in the trend and anomaly maps. Other smaller-scale features look similar, e.g., Australia and South America, although Africa does not fit that kind of agreement. Over North America the comparison is mixed, but the southeast and southwest U.S. agree somewhat between the long-term trend and the anomalies for April 2020.