Please note: During the construction of this report, three stations in Egypt were determined to have submitted data from April. This will be corrected in future runs of the global temperature records. However, this is not expected to have significant impact on the May 2020 global temperature value.

In the atmosphere, 500-millibar height pressure anomalies correlate well with temperatures at the Earth's surface. The average position of the upper-level ridges of high pressure and troughs of low pressure—depicted by positive and negative 500-millibar height anomalies on the May 2020 and March–May 2020 maps—is generally reflected by areas of positive and negative temperature anomalies at the surface, respectively. 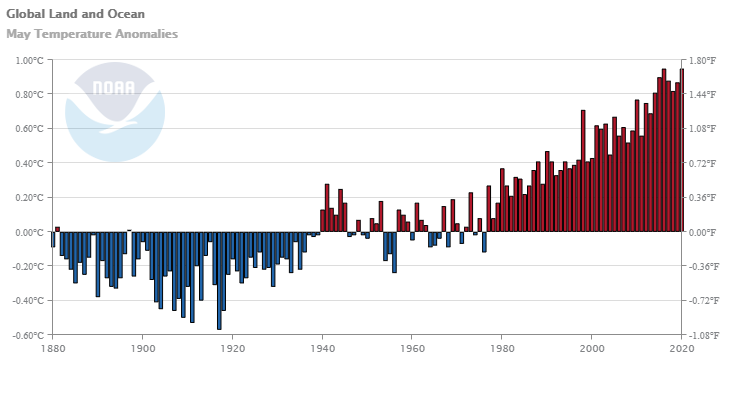 Regionally, Asia had its warmest May on record at 2.09°C (3.76°F) above average, surpassing the now second-warmest May set in 2012 by 0.25°C (0.45°F). May 2020 also marked the first time Asia's May temperature departure from average surpassed 2.0°C (3.6°F). May 2020 was Asia's 27th consecutive May with temperatures, at least nominally, above the 1919–2000 average. Meanwhile, Africa, South America, and the Caribbean region had a May temperature that ranked among the six warmest Mays on record. 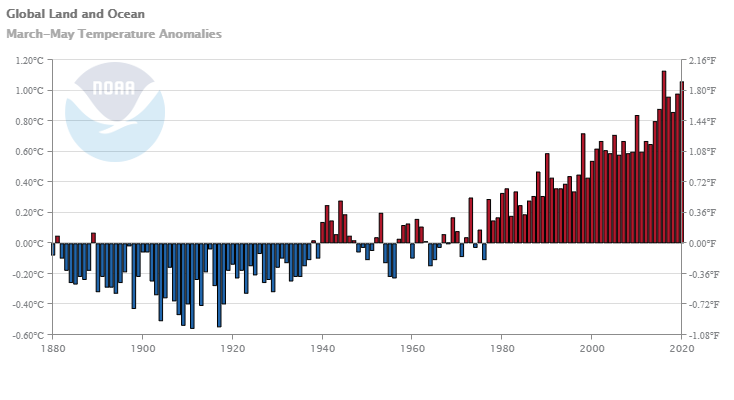 The global land-only and global ocean-only surface temperatures were also the second warmest for March–May on record, behind March–May 2016. During the three-month period of March–May 2020, much of the global land and ocean surfaces had warmer-than-average temperatures. Much of northern Asia had temperatures that were 3.0°C (5.4°F) above average or higher, while the most notable cooler-than-average conditions were present across much of Canada. Record-warm March–May temperatures were observed over Central and South America, the Gulf of Mexico, Europe, Africa, northern Asia, as well as across parts of the Atlantic, Indian, and Pacific oceans. 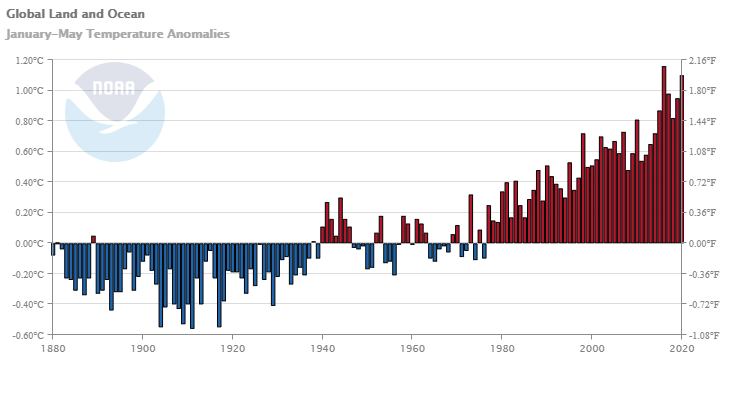 May 2020 Land-Only Precipitation
Percent of Normal

The maps shown above represent precipitation percent of normal (left, using a base period of 1961–1990) and precipitation percentiles (right, using the period of record) based on the GHCN dataset of land surface stations. As is typical, precipitation anomalies during May 2020 varied significantly around the world. May 2020 precipitation was generally drier than normal across parts of the southwest, northern, and northeastern contiguous U.S., southern Alaska, northern and central Europe, and across Asia. Wetter-than-average conditions were present across parts of the northwestern and southeastern contiguous U.S., eastern Europe, and across central and eastern Asia. March–May precipitation was generally drier than normal across parts of the western half of the contiguous U.S., southern Mexico, central and northern Europe, and across parts of eastern Asia. Wetter-than-normal conditions were notable across the southwestern and eastern half of the contiguous U.S., Alaska, western and southern parts of Europe, western, central and southwestern Asia. 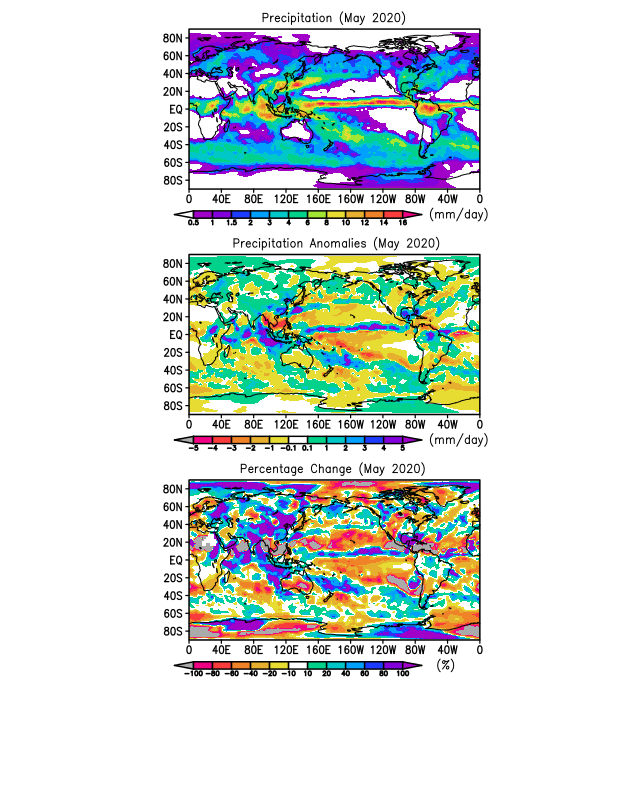 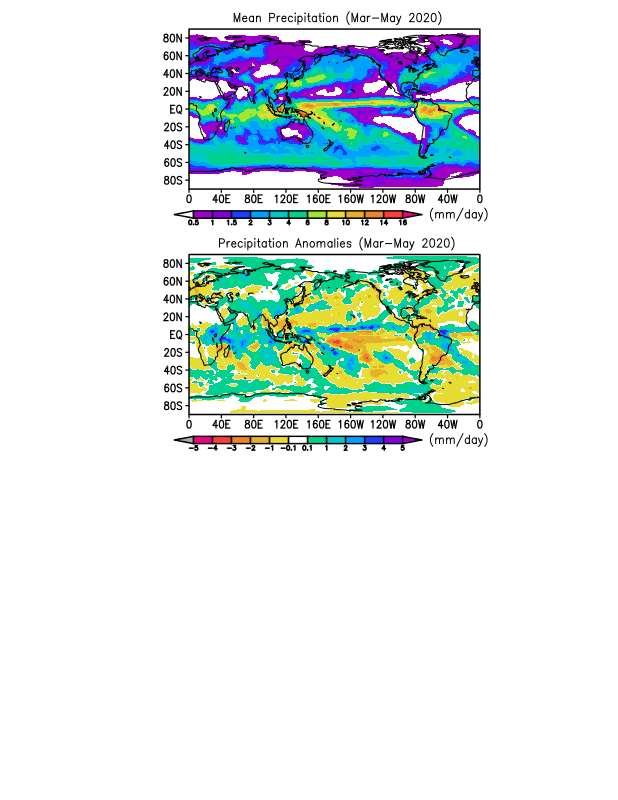 For May the ITCZ across the Pacific and Atlantic Oceans is a narrow line of maximum rainfall already well north of the Equator (May Precipitation Totals Map), in fact further north than usual as seen by the east-west pattern of positive/negative anomalies (May Precipitation Anomalies Map) in both oceans. SST's over the central Pacific along the Equator currently show a negative anomaly associated with an ocean Kelvin wave and that ocean influence may be related to the positioning of the ITCZ there. Over South America and Africa the ITCZ is broader, with specific maxima.

Over the Indian Ocean there are significant rain features both north and south of the Equator, and the tropical cyclone season has already started on the north side of the Equator with strong Cyclone Amphan sweeping up the Bay of Bengal in the middle of the month and causing flooding in northeast India and Bangladesh. Another small feature of interest in the May precipitation maps (middle and bottom panels) is along the southeast coast of the Arabian Peninsula, where a small unnamed tropical cyclone slowly moved onto the coast in Oman and caused serious flooding, before edging southwestward into Yemen. Indochina and the South China Sea show a rainfall deficit for May and Australia is almost completely dry as the Asian monsoon has already moved north and begun to impact the Asian continent. In the sub-tropics the rain feature associated with the springtime East Asian Maiu Front can be seen south of Japan and extending back across Taiwan and into southern China where some flooding occurred in Guangzhou and Macao along the southern coast.

In North America the May precipitation map shows the general climatological pattern of wetter eastern half and drier western part of the continent. The May 2020 anomaly map is correlated positively with that climatology in general with much of the southwest U.S. drier than normal and with significant drought. Florida and parts of the southeast were relatively wet in May due to the early passage of Tropical Storm Arthur. Even the eastern Pacific got an early start on the tropical cyclone season with Tropical Storm Amanda producing flooding on the Pacific side of Central America in El Salvador at the end of May, before crossing over the land and becoming Tropical Storm Cristobal in Yucatan in early June and eventually crossing the Gulf of Mexico and coming ashore in the Louisiana and Mississippi. Even before that, during May, the SSTs in the Gulf were above the mean and the rainfall anomaly was also, perhaps foreshadowing an active tropical cyclone season there and in the open Atlantic to the east.

Precipitation deficits dominate over western to central Europe and Scandinavia and are related to continuing drought conditions there. Further east very warm temperatures for May in central Asia, even up to the Arctic Ocean coast, are associated with a varied pattern of precipitation anomalies.

Figure 2 shows the three-month (March–May 2020) mean and anomaly precipitation fields. The mean precipitation map shows most typical climatological-type features for the Northern Hemisphere spring season and does not as clearly show smaller-scale features evident in the monthly maps, such as oceanic tracks of tropical cyclones. Instead the three-month compilation shows the larger climatological features, but the anomaly map shows important variations. For example, along the ITCZ in both the Pacific and Atlantic Oceans, the core of the ITCZ has a positive anomaly and the surrounding, drier sub-tropics have a negative anomaly, signaling the wet areas there are wetter than normal and dry areas are drier than normal. Even the double ITCZ is weakly evident in the eastern Pacific.

The Indian Ocean shows mostly positive anomalies and extends that feature into eastern Africa, at least north of 10°S, associated with floods and the locust plague over the last several months in that region. The precipitation deficit over western Europe relates to the drought conditions there. Over North America general relative wetness in the East and dryness in the West continues and matches estimated drought distributions, as expected. Australia and Indochina are also noted for dry conditions for the three-month period.