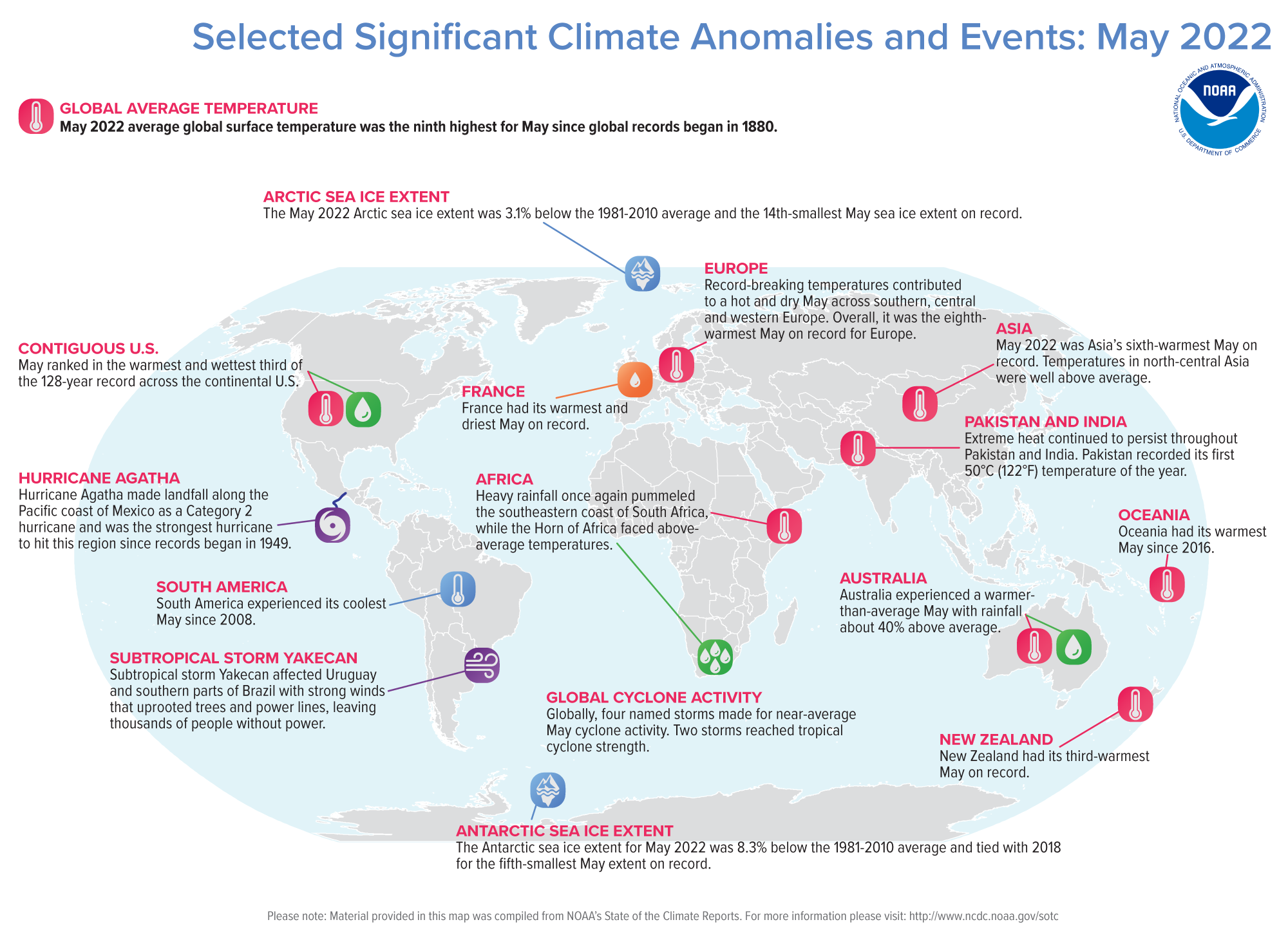 The dry zones across the sub-tropics have shifted somewhat northward in May and split the rainy areas along the Intertropical Convergence Zone (ITCZ) and the mid-latitude storm tracks (top panel of figure below). The Asian monsoon is beginning over Indochina, and the springtime Meiu/Baiu front extends across southern China northeastward through southern Japan. While these are typical seasonal patterns, the anomaly maps for May (middle and bottom panels) are consistent with ongoing droughts as well as occurrences of floods and landslides.

Across the central to eastern Pacific, a thin east-west line of positive anomalies (middle and bottom panels of figure above) hovers just north of the equator, with a parallel set of distinct negative anomalies just to the south. These two coupled features indicate an ITCZ just to the north of its climatological position for this month. Similar features have existed for the last few months. To the west along the equator the strongest negative anomaly on the globe sits in the western Pacific east of New Guinea. This is the continuing, month-after-month defining feature of the ongoing La Niña. To the west a collection of positive anomaly features extends from Japan in a horseshoe-shaped feature through Indochina, the Borneo area and across and to the east of Australia. This generally greater-than-normal rainfall zone is the counterpoint in the main La Niña couplet to the negative area to the east. These features were associated with floods in northeast Australia, Indonesia, northeast India, Bangladesh, Vietnam, and southern China. The eastern half of the Indian Ocean experienced plentiful rainfall and was also visited by two simultaneous tropical cyclones north and south of the equator, adding to the pattern.

However, the western part of the ocean and land areas to the west and north were dry, typical of La Niña conditions, with a heat wave in northwest India and Pakistan early in the month, drier than normal conditions across the Arabian Peninsula, and sandstorms in Iraq. Even worse, the Horn of Africa region continued under a multi-season drought that is in danger of causing famine conditions amid chaotic political conditions. Floods in eastern South Africa were associated with the monthly positive feature there.

South America this month was rainy in the north in the ITCZ zone and dry to the south, but both features are more extreme than usual, as is typical under La Niña conditions. Below the ITCZ most of the continent was dry, and drier than normal, with the narrow wetter-than-normal corridor along the northern coast. Serious floods in Suriname and northeast Brazil were one outcome of this feature. A small positive rain anomaly in southeast Brazil that extends southeastward into the South Atlantic also was associated with floods and landslides in the Sao Paulo region. This general rain anomaly pattern across South America is typical of La Niña conditions.

In the central Pacific, two strands of positive rainfall anomalies extended northward from the ITCZ into the mid-latitude storm track and into the coasts of the northwest U.S. and southwest Canada. Meanwhile, the sub-tropic dry zone to the south was even drier than normal and extended into the southwest U.S. Coupled with above average temperatures, La Niña drought conditions continued there with an early start to the wildfire season in New Mexico and Colorado. Further south the first hurricane of the Eastern Pacific arrived early at the end of the month and soaked southern Mexico.

The seasonal (March through May) mean precipitation map and anomaly pattern reflects the influence of La Niña from the Indian Ocean to the Atlantic in the tropics and over South America and western North America. Indochina and eastern China had surplus springtime rain, and the excess moisture stretched from there across the Philippines, along the ITCZ to South America. Excessive dryness continued during this season in southwest Asia, the Horn of Africa and surrounding areas, across the middle of South America and the western U.S. and almost all of Mexico. A drier-than-normal pattern was also evident in Europe from France and into eastern Europe and northward into Scandinavia as part of ongoing drought conditions over parts of this region. 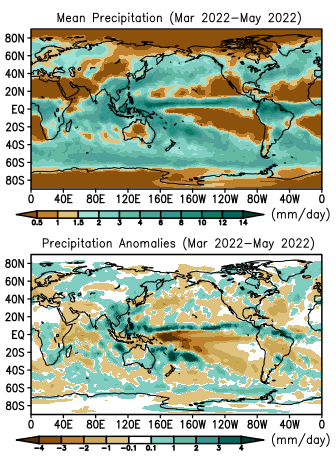 The following analysis is based on global drought indicators is available at the Global Drought Information System.

May 2022 was drier than normal across southern, northern, and interior parts of Europe, with May dryness especially severe from the Iberian Peninsula to Germany. The dry conditions were exacerbated by unusually hot May temperatures. This dry pattern extended back in time 6 to 9 months and was reflected in precipitation-, temperature-, and evaporation-based indices, as well as low groundwater and soil moisture. With drought threatening vineyards and the grain harvest in parts of France, 24 departments were officially declared to be in drought with water restrictions in effect in many areas. Conservation efforts and some water bans were in effect in Norway and the Netherlands.

The last 1 to 6 months were drier than normal across interior portions of Asia and the Arctic coast across the eastern half of Siberia. May was warmer than normal across parts of far eastern Siberia and from north central Asia to northern India. Eastern Siberia experienced unusually high evaporation rates, and groundwater and soil moisture levels were low from north central Asia to Southwest Asia, as well as parts of northern China. Vegetation was in poor condition across parts of northern China, western India, and Southwest Asia. Iraqi officials were predicting a reduced wheat and rice harvest this year due to drought.

May was drier than normal across parts of Africa. Much of East Africa and the Sahel region was dry for the last 2 months to 3 years, and conditions were especially acute in East Africa, where evaporation was high and groundwater and soil moisture depleted. According to media reports, more than 23 million people in Ethiopia, Somalia, and Kenya were dealing with severe hunger, creating what the United Nations deemed a humanitarian emergency. The March-May 2022 rainy season is expected to be the driest on record, following 4 consecutive failed rainy seasons, a climatic event not seen in at least 40 years.

In the Americas, dry conditions during May stretched from Peru and central Brazil southward through Argentina and Chile, with low groundwater, dry soils, and poor vegetative health in these areas. Low groundwater, dry soils, and unhealthy vegetation were also evident in northern Mexico, the western United States, the southern U.S. Great Plains, western Canada, and southern Alaska.

Northern portions of Australia were dry in May while other parts were generally wetter than normal.