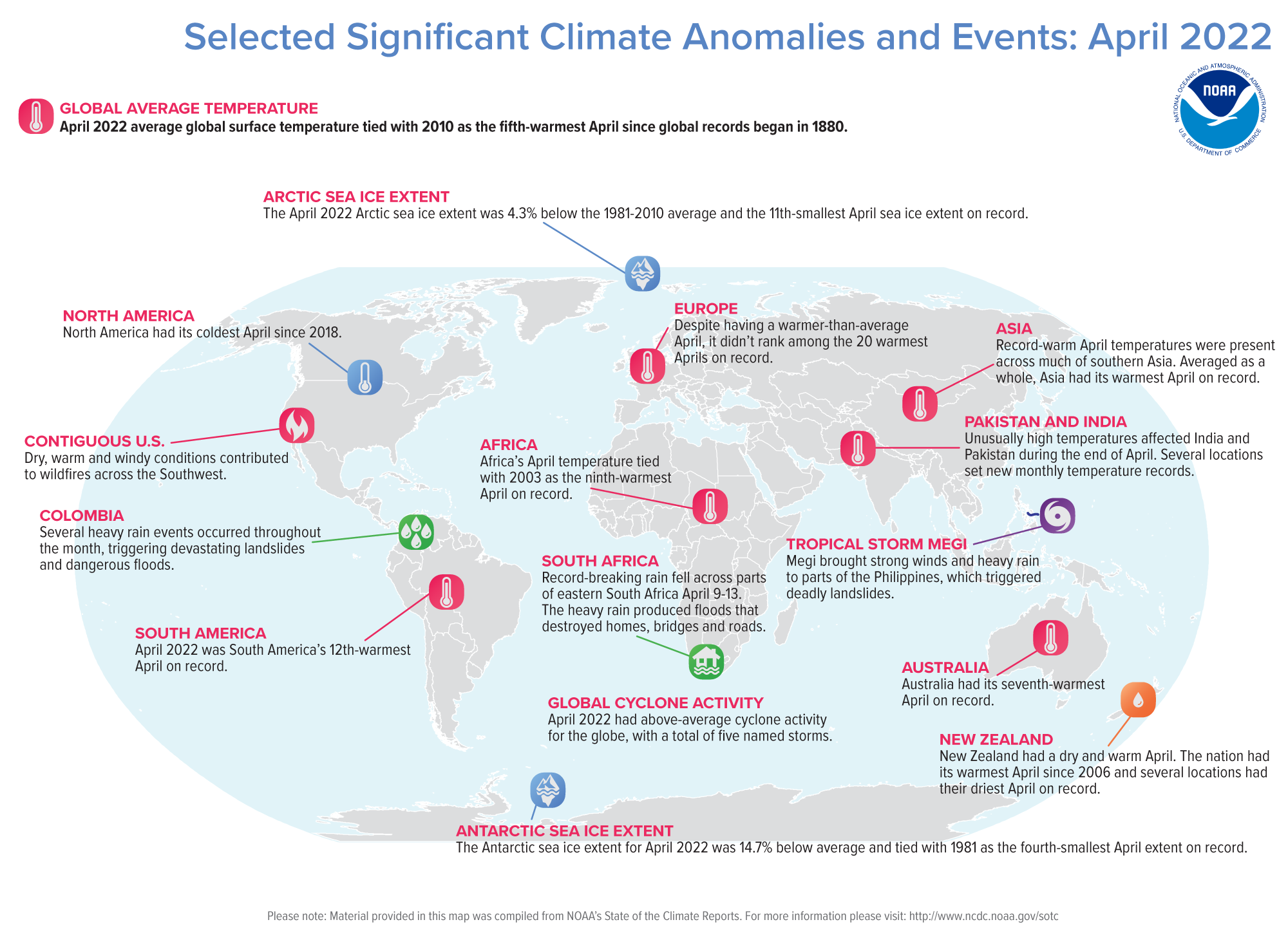 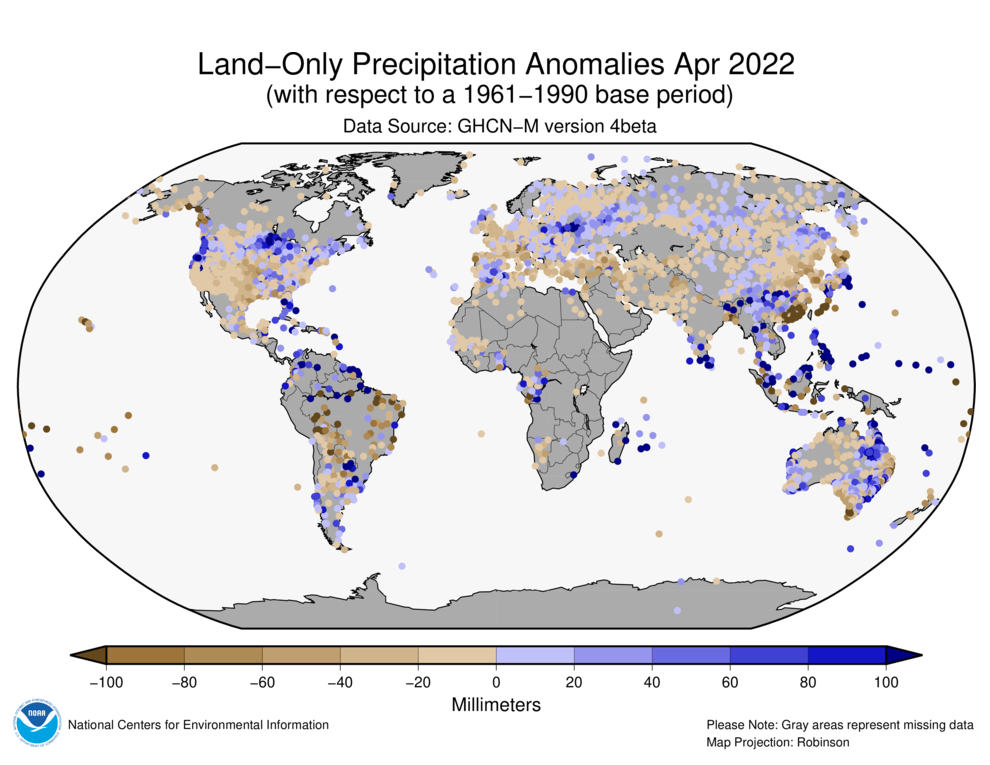 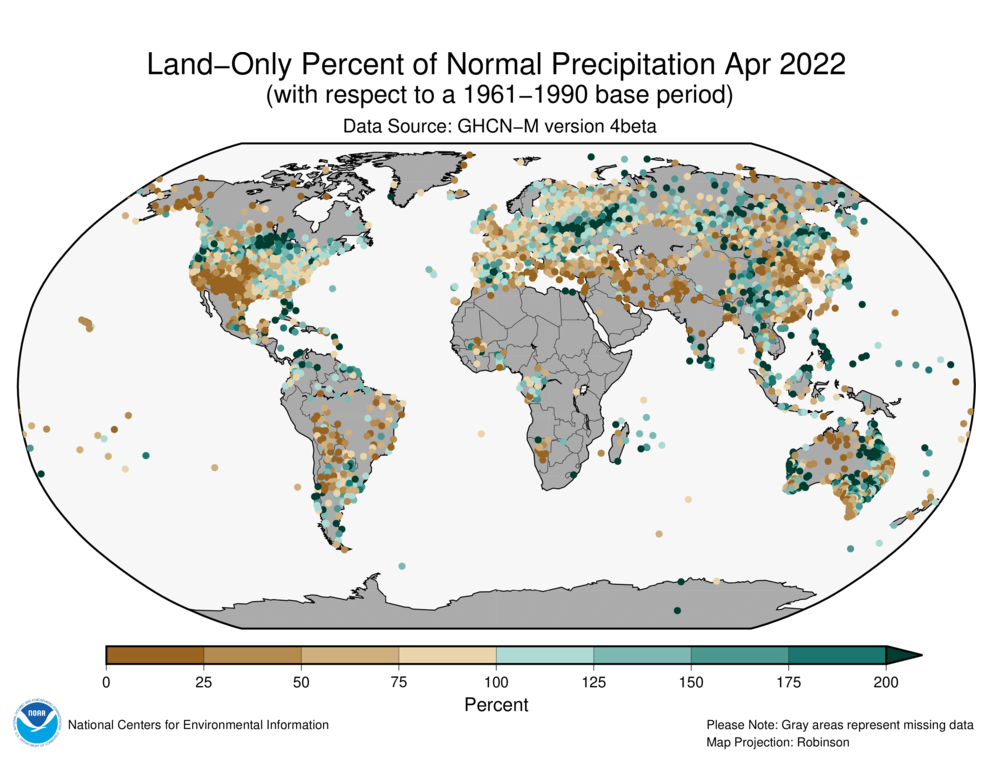 Pakistan had below-average precipitation during the month, resulting in its second driest April since records began in 1961 at 74% below average. Only April 2000 was drier (87% below average).

Colombia had several heavy rain events during the month. Of note, on April 2, the copious rainfall triggered a deadly landslide in the Nariño department (western Colombia). The landslide claimed the lives of at least three people and also blocked roads. Similarly, torrential rain prompted floods and landslides in the department of Antioquia (northwestern Colombia). During late April, the department of Cundinamarca (central Colombia) had several days of heavy rain, once again prompting floods and landslides.

According to Argentina's National Weather Service, during April 3–10, parts of eastern Argentina had heavy rain, with several locations receiving between 40–150 mm (1.6–5.9 inches) daily.

Tropical Storm Megi (also known as Agaton) was a tropical storm that made its first landfall in Calicoan Island, Philippines on April 10, 2022 and a second landfall in Basey the following day. The storm brought torrential rain and strong winds and triggered several deadly landslides. The storm was responsible for over 200 fatalities and at least 25.8 million U.S. dollars in damages.

During April 9–13, 2022, record-breaking heavy rain fell across parts of southeastern South Africa. Several locations in the KwaZulu-Natal province received at least 304mm (12 inches) of rain during a 24-hour period from April 11–12. To put it in perspective, this amount is about four times the monthly normal precipitation for some of these locations and thus, was the highest 24-hour rain totals in 60 years, according to media reports. The city of Durban was one of the most affected with over 300 fatalities due to deadly floods and landslides. The heavy rain was also responsible for destroying homes, bridges and roads. According to reports, this was the deadliest storm on record for South Africa.

Australia, as a whole, had a wetter-than-average April at 27% above average. Regionally, Queensland and New South Wales had the highest precipitation totals during the month and it was the ninth-wettest April for both regions.

New Zealand had a drier-than-average month, with several locations having their driest April on record. No location had a record or near-record wet April.

April 2022 was drier than normal across northern and western parts of Europe with some areas warmer than normal. Parts of eastern Europe and the Iberian Peninsula had a wetter-than-normal month. Drier-than-normal conditions continued at the 3- to 9-month time scales, along with above-normal evaporative stress. The European Combined Drought Indicator showed drought in southern, eastern, and northern parts of the continent. Satellite-based indicators reflected widespread low groundwater and dry soil moisture conditions across much of Europe.

April was drier than normal across parts of northern Siberia and from central to south Asia. Above-normal April temperatures contributed to dry conditions by increasing evaporative demand, especially in the southern portions. Drought is especially evident in northern areas at the 1- to 6-month time scales according to the GPCC Global Drought Index and evaporation-based indicators such as the Evaporative Demand Drought Index (EDDI). Satellite-based indicators reflected widespread low groundwater, dry soil moisture conditions, and stressed vegetation in Southwest Asia.

April continued a pattern of unusually warm temperatures across India. This prompted the Standardized Precipitation Evapotranspiration Index (SPEI) to show dry conditions across the sub-continent. The SPEI shows dryness extending across India to the Arabian Peninsula at the 1- to 3-month time scales, and persisting over the western portions of this region at longer time scales. The GPCC Global Drought Index indicated drought from western India to Arabia at the 1- to 3-month time scales and satellite-based indicators showed dry soils and low groundwater. It should be noted that April is in the dry season for India when precipitation is normally low; the wet (monsoon) period is generally from June to October.

Some precipitation fell across the Sahel region in Africa during April, but the 3-month SPEI and GPCC Global Drought Indicator maps show dry conditions persisting in parts of the region. Dryness is indicated in East Africa and the equatorial tropical region of the continent on the 1- to 6-month SPEI, Standardized Precipitation Index (SPI), and Evaporative Stress Index (ESI) maps, as well as in satellite-based indicators for vegetative health (VHI), groundwater, and soil moisture. The SPEI shows dryness across much of Africa at the 12-month time scale, although dryness based on the 12-month EDDI and SPI is not as widespread.

Northwestern portions of Australia were dry in April, while other parts were wetter than normal. The SPEI shows dry conditions in the north from the 1- to 12-month time scales, while the EDDI and ESI show dryness across the north, west, and south at 2 to 3 months, and the VHI shows stressed vegetation across much of the continent. These observations are confirmed by the Australian Bureau of Meteorology?s soil moisture and 5-month precipitation decile drought analyses.

In South America, dry conditions during April stretched across the continent from Peru to southern Brazil, and were evident in this region at the 1- to 6-month time scales on the SPI, SPEI, ESI, and EDDI maps. The dry conditions are more widespread and intense, including across Chile and southern Argentina, on the 12-month SPEI, SPI, and EDDI maps. The satellite-based indicators show low groundwater and dry soils in these areas. Drought in southern Brazil was confirmed on the Northeast Brazil Drought Monitor.

Satellite-based indicators show low groundwater, dry soils, and unhealthy vegetation in northern Mexico, the western United States, and the southern U.S. Great Plains. Dry conditions are indicated in these areas on the 1- to 3-month ESI and 1- to 12-month SPI and SPEI maps, and in the western U.S. on the 1- to 6-month EDDI maps. The North American Drought Monitor product confirms drought in these areas as well as in parts of the southern Canadian Prairies. 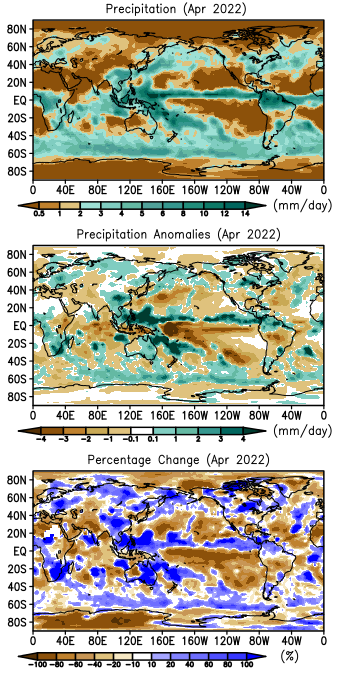 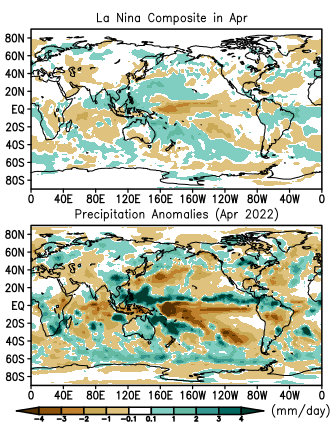 La Niña is still the main story for April, and along with the usual seasonal changes, dominates a lot of the discussion of large-scale precipitation anomalies this past month. This La Niña has continued for two whole years, starting around April 2000. This length of La Niña is not that unusual, with El Ninos tending to be less than a year, often followed by a longer La Niña. The current La Niña, however, seemed to develop on its own, not as a rebound from a previous El Nino. The below normal SSTs in the central Pacific Ocean along the Equator associated with the La Niña component of the ENSO phenomenon produce a reaction in the vertical motion and moisture patterns across the tropics that result in fairly reliable precipitation anomaly patterns in the Pacific. The atmospheric response to those vertical motion and precipitation patterns in the deep tropics produce ripples that can be noted far from their origins.

For this April the monthly precipitation pattern (Fig. 1, top panel) shows the ITCZ across the Pacific above the Equator, the sub-tropical dry zones and higher latitude precipitation zones associated with storm tracks. The anomaly maps (Fig. 1, middle and bottom panels) show strong positive and negative features over the Pacific with a negative core near 160°E, just below the Equator, with extensions to the east and southeast. Just to the north a narrow positive anomaly runs east to west across the Pacific, indicating an ITCZ shift to the north, with a bulge in the western Pacific over and to the east of the Philippine Islands. Flooding and landslides occurred during the month in the Philippines associated with this feature. The tropical Indian Ocean is dominated by negative anomalies. These features are evident in the La Niña composite in Fig. 2 in comparison with the repeated anomalies for this April.

However, spring in the Northern Hemisphere tends to be a weak season for ENSO impact and this is case this April with many weaker features in the composite not appearing in this April's anomalies. This is true over Africa, South America and East Asia where the patterns in Fig. 2 don't match. Over North America the match is very mixed, and although the drought in the U.S. southwest continues, La Niña in this season is only a minor contributor, according to the composite.

An intense, pre-monsoon heat wave in northern India and Pakistan was also very dry and is evident in the negative rain anomalies, which are matched in the La Niña composite. Over Australia the eastern half of the country shows rainfall excess with flooding around Sydney and along the northeast coast, somewhat in concert with the composite. In South America non-ENSO influences seem to dominate with a pattern near opposite of the composite, with flooding in Colombia, Venezuela, and in southern Brazil. Over Africa dry conditions in the Horn of Africa and surrounding areas are evident, but with a surplus of rain in South Africa where serious flooding occurred this month. Over North America the southwest U.S. and northern Mexico continued to have precipitation deficits, and this long-term resulting drought led to early season wildfires, especially in northern New Mexico. 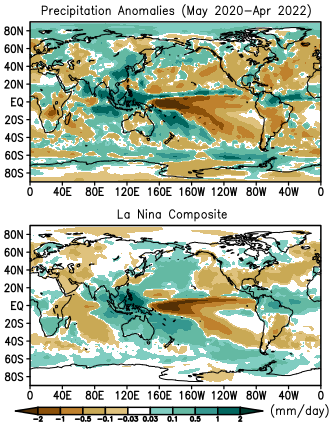 Taking a longer look back, over the last two years, we can see how ENSO, in this case the current two-year La Niña, affects global precipitation patterns. Fig. 3 shows the mean anomaly pattern for the two years ending in April 2022 and a composite of La Niña months from 1979–2021 for comparison. A first glance indicates that the negative SST pattern in the central / eastern Pacific is related to an intense rainfall deficit feature in the middle of the equatorial Pacific and there are other plus/minus features located east-west along the Equator and angled features to the northeast (Northern Hemisphere) and southeast (Southern Hemisphere) into higher latitudes. The effect of the current La Niña over a broad swath of our planet is obvious.

NOAA National Centers for Environmental Information, State of the Climate: Monthly Global Climate Report for April 2022, published online May 2022, retrieved on May 22, 2022 from https://www.ncei.noaa.gov/access/monitoring/monthly-report/global/202204.