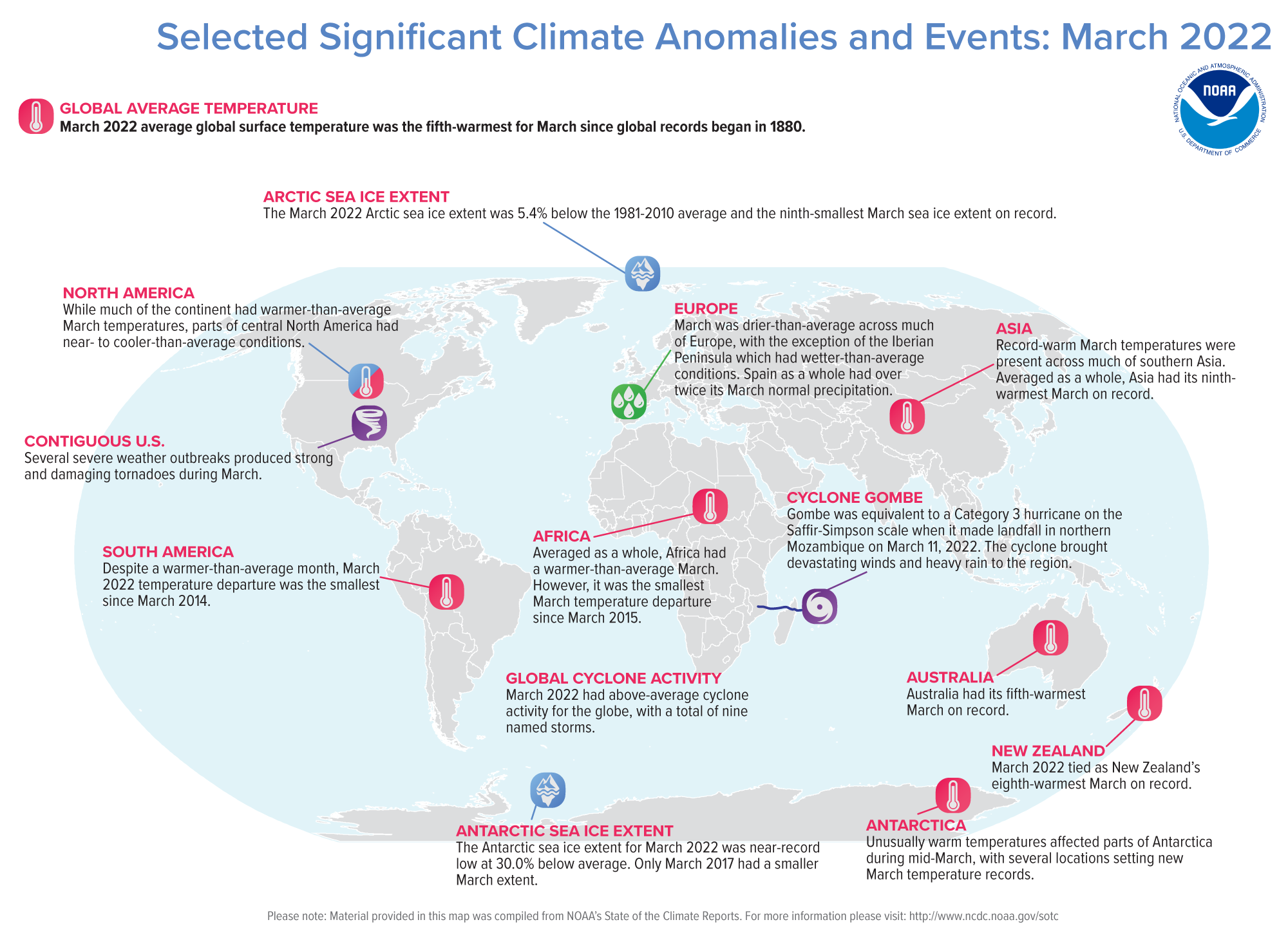 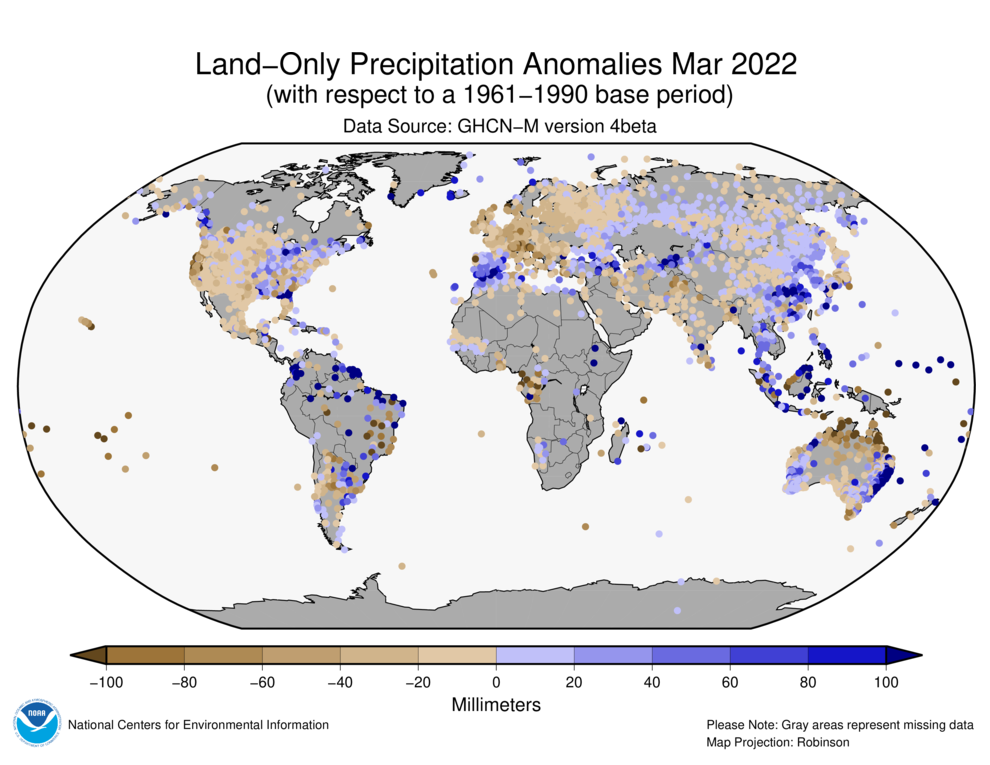 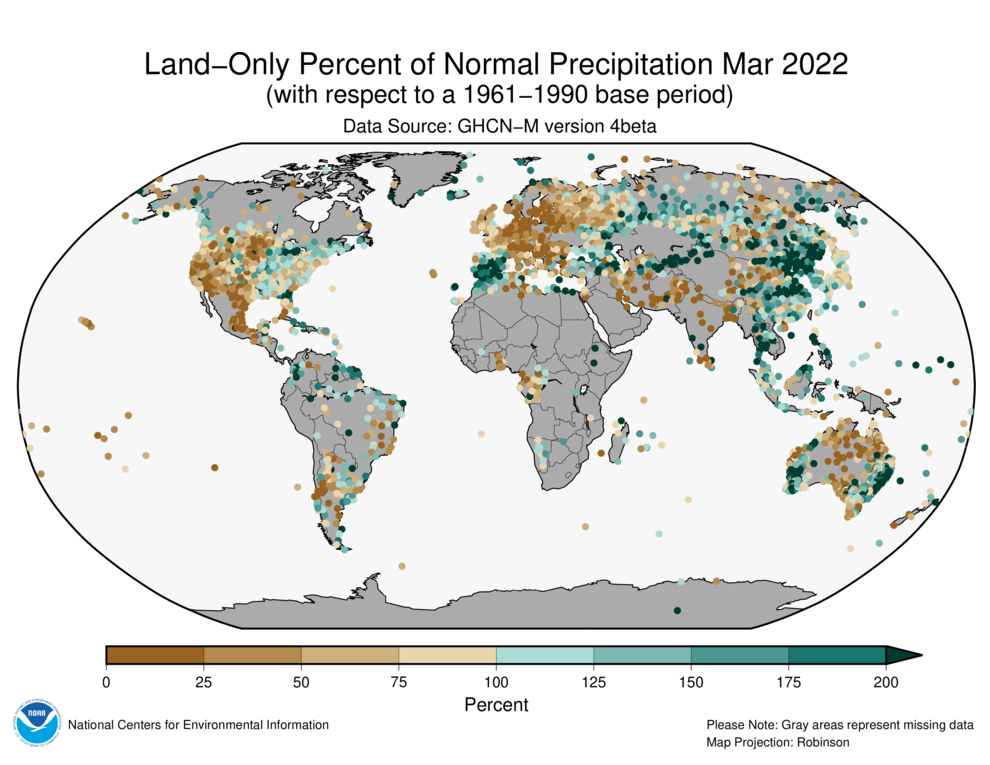 As is typical, precipitation anomalies during March 2022 varied significantly around the world. March precipitation was generally drier than normal across the western contiguous U.S., Mexico, central and northern Europe, south-central Asia, central Australia as well as parts of southeastern Brazil, southern South America, and across parts of central and eastern Pacific Islands. Wetter-than-normal conditions were notable across parts of the eastern contiguous U.S., northern South America, the Iberian Peninsula, central and eastern Asia and the western and eastern coasts of Australia.

Wetter-than-average conditions engulfed much of Spain during March, resulting in over twice (223% of normal) its March normal. This was also the sixth-wettest March since national records began in 1961.

Brazil's city of Petropolis was once again affected by heavy rain on March 20, following a similar weather event that had occurred in mid-February that claimed the lives of over 200 people. According to the Petropolis Civil Defense, 415 mm (16.3 inches) of rain fell in just 10 hours on March 20. The torrential rain caused devastating floods and landslides. Roads were either inundated or blocked and buildings were damaged.

Tropical Cyclone Gombe was an equivalent Category 3 hurricane in the Saffir-Simpson scale when it made landfall in northern Mozambique on March 11, 2022. This was only several weeks after Tropical Storm Ana made landfall in the same region. Gombe brought devastating winds and heavy rain and affected over 100,000 people in the affected regions. It was also reported that over 11,000 homes were either destroyed or severely damaged. Southern Malawi was also affected by the storm, displacing over 100,000 residents in the affected regions.

March 2022 was drier than normal across much of Europe with some areas warmer than normal. This month's precipitation deficits added to dryness that is evident in 3- to 12-month indices, which show dry conditions especially along southern parts of Europe where the European Combined Drought Indicator identifies drought conditions. Satellite-based indicators reflect widespread low groundwater and dry soil moisture conditions across much of Europe.

Above-normal March temperatures have contributed to dry conditions in northern and eastern parts of Siberia. Drought is especially evident at the 1- to 3-month time scales according the GPCC Global Drought Index and evaporation-based indicators such as the Evaporative Demand Drought Index (EDDI).

Unusually warm March temperatures prompted the Standardized Precipitation Evapotranspiration Index (SPEI) to show dry conditions across India. The SPEI shows dryness extending from India to the Arabian Peninsula at longer time scales, with the GPCC Global Drought Index indicating drought from western India to Arabia at the 1- to 3-month time scales and satellite-based indicators showing dry soils and low groundwater. It should be noted that March is in the dry season for India when precipitation is normally low.

The 1- to 3-month SPEI and GPCC Global Drought Indicator maps show dry conditions along the Sahel region in Africa, while dryness is indicated in the equatorial tropical region of Africa on the 1- to 3-month SPEI, Standardized Precipitation Index (SPI), and Evaporative Stress Index (ESI) maps, as well as in satellite-based indicators for groundwater and soil moisture. The SPEI shows dryness across much of Africa at the 12-month time scale, although dryness based on the 12-month EDDI and SPI is not as widespread.

Northern portions of Australia have dryness indicated at the 1- to 12-month time scales on the SPEI and SPI maps. Dry conditions are evident in western Australia on the 2- to 3-month evaporation-based EDDI and ESI maps. Satellite-based indicators show low groundwater in western Australia and dry soils in northern Australia. These observations are confirmed by the Australian Bureau of Meteorology's soil moisture and 4-month precipitation decile drought analyses.

Satellite-based indicators show low groundwater, dry soils, and unhealthy vegetation in northern Mexico, the western United States, and across the U.S. Great Plains into the Canadian Prairies. Dry conditions are indicated in these areas on the 1- to 3-month SPI, 1- to 6-month EDDI, and 1- to 12-month SPEI maps. The North American Drought Monitor product confirms drought in these areas. 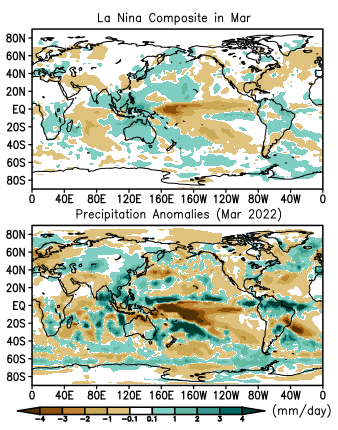 The seasonal transition of precipitation patterns is underway with climatological mean features moving northward in March, especially noticeable in the tropics. The Inter-Tropical Convergence Zone (ITCZ), that narrow band of rain across the Pacific just above the Equator, has shifted northward just a little as expected (Fig. 1, top panel). It extends eastward across South America and into the Atlantic, still fairly narrow. In the westward direction from the Pacific, across the Maritime continent, Indian Ocean and Africa the ITCZ is much broader, but still distinctive as a climate feature.

In addition to the seasonal changes, other forces, acting on inter-annual and smaller scales produce the anomaly maps for this March (Fig. 1, middle and bottom panels). These patterns of lesser or more precipitation than occur in an average March, reveal distinct features, some at a large scale stretching across a large part of the Pacific, and others much smaller, but with significant excesses or deficits of precipitation. As has been the case for much of the last year and more, the lower-than-normal SSTs of the central Pacific associated with the la Niña phase of the ENSO phenomenon dominate the Pacific Ocean anomaly pattern, but with some subtle shifts this month. Figure 2 shows the la Niña composite pattern for March and repeats the anomaly pattern for this particular March. Across the tropical Pacific the negative anomalies for this March are very strong and expansive and roughly in the same place as in the composite (the mean pattern of a number of la Niñas in March). But, distinct in this year's March a narrow positive anomaly just north of the Equator sweeps across the ocean into South America. This feature is not in the composite, is a change from last month (February), and may indicate some coming change in the ENSO system.

Over the Maritime Continent positive rain anomalies dominate this March, but with a much more variable pattern than the composite. Australia is dominated by a positive anomaly in the composite (typical of la Niña), but has a variable pattern this last month with distinct dryness along its north coast. But, in the southeast, especially right along the coast a relatively small, but intense positive feature is very evident. This feature is associated with heavy rains in that area at multiple times of the month and serious flooding there, including in Sydney. In south Asia positive anomalies dominate much of China, Indochina and the Bay of Bengal, with drier than normal conditions across India and the Arabian peninsula, prolonging a drought over most of this area. This dry feature does compare with the la Niña composite. Over Africa a variable pattern is evident, with a positive feature across northern Madagascar into Mozambique on the coast related to tropical cyclone activity.

Over South America the La Niña composite shows generally positive anomalies over its northern half, while the pattern for this month shows an intense ITCZ with heavy rain dominating its east-west domain. Landslides due to heavy rain were noted in Peru and Ecuador during this month. In addition, floods in southeast Brazil have their own positive anomaly feature, opposite of what shows in the la Niña composite.

The western U.S. and Mexico remain in a strong drought and the general precipitation deficits across the region for March did not help alleviate the condition. The area of recent dryness extends eastward through the Gulf of Mexico. This general pattern matches roughly that in the La Niña composite, including offshore west of California and Mexico. La Niña is well known for being related to dryness over the southwest U.S. Wildfires in Texas were related to the dry conditions.

A swath of deficit precipitation is also evident across central Europe from France into Russia, helping to continue drought conditions in that region.

Global OHC for January–March 2022 is the highest January–March OHC, as well as the highest quarterly OHC, in our records, which extend back to 1955. Overall, the latest quarterly OHC reveals widespread warmer than normal conditions relative to the 1955–2006 mean, a situation observed since the end of 2016. After the relative lows observed around mid-2020, global OHC remains at record high levels, which coincides with the weakening since late 2020 of the 2020– 2021 La Niña event. In general, OHC features observed in January–March 2022 are very similar to those observed during October–December 2021. Although weaker, cool conditions, about -10x105 J/m3, are still observed extending westward from South America to about 165°W in the Equatorial Pacific Ocean. Cooler than normal conditions also exist across the Subtropical North Pacific Ocean. Much higher, > 30x105 J/m3, than normal OHC conditions continue to exist in the Gulf Stream/North Atlantic Current, the South Atlantic Ocean, the North Pacific Current, and the western tropical South Pacific Ocean. Higher, > 10x105 J/m3, than normal OHC conditions dominate the Indonesian Throughflow, the South China Sea, the North Indian Ocean, along the Antarctic Circumpolar Current in the Indian Ocean and Southwestern Pacific Ocean sectors, and the Tasman Sea. Cool conditions, < -10x105 J/m3, persist in the subpolar North Atlantic Ocean south of Greenland and Iceland and in the southern Norwegian Sea.