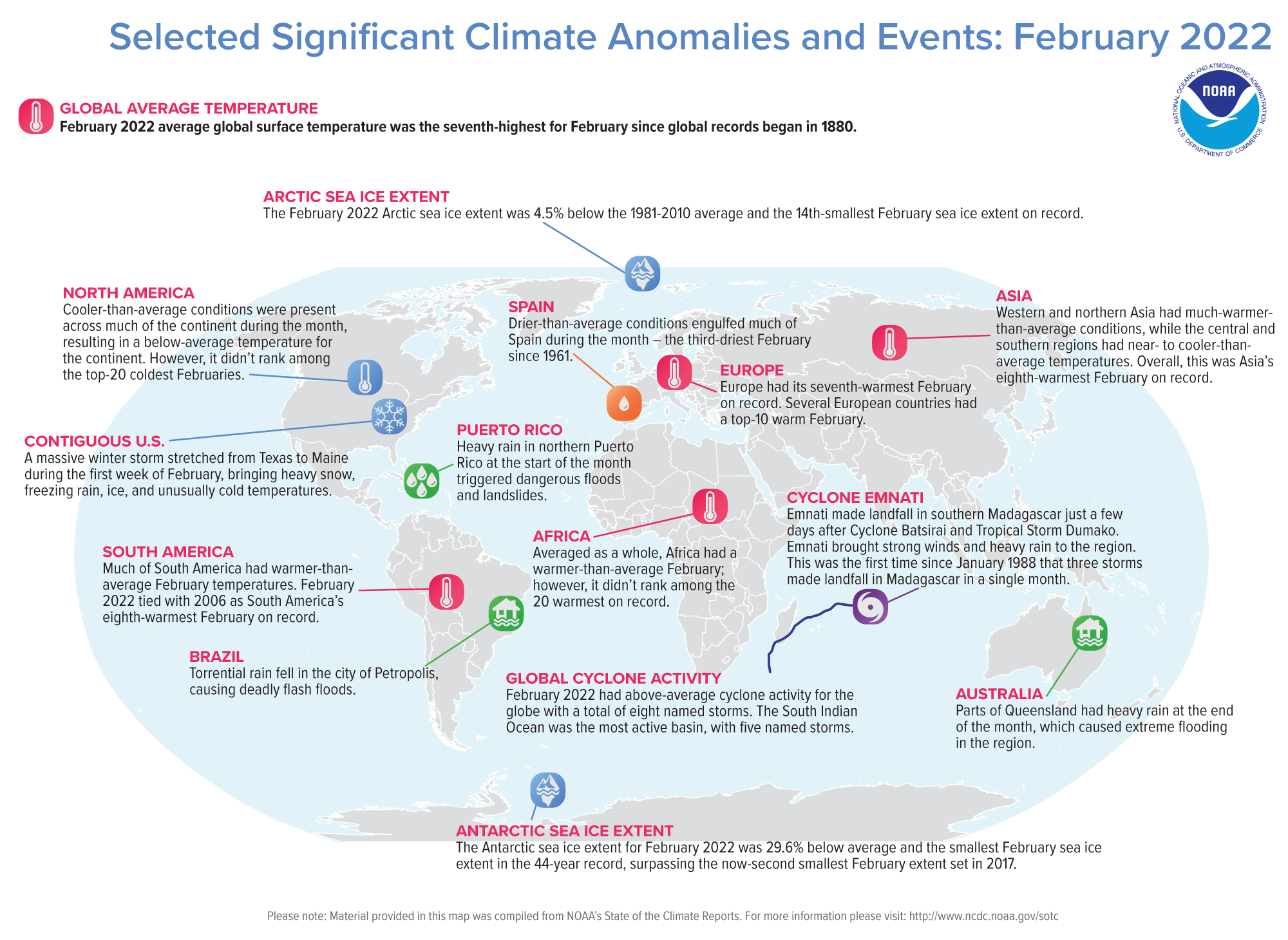 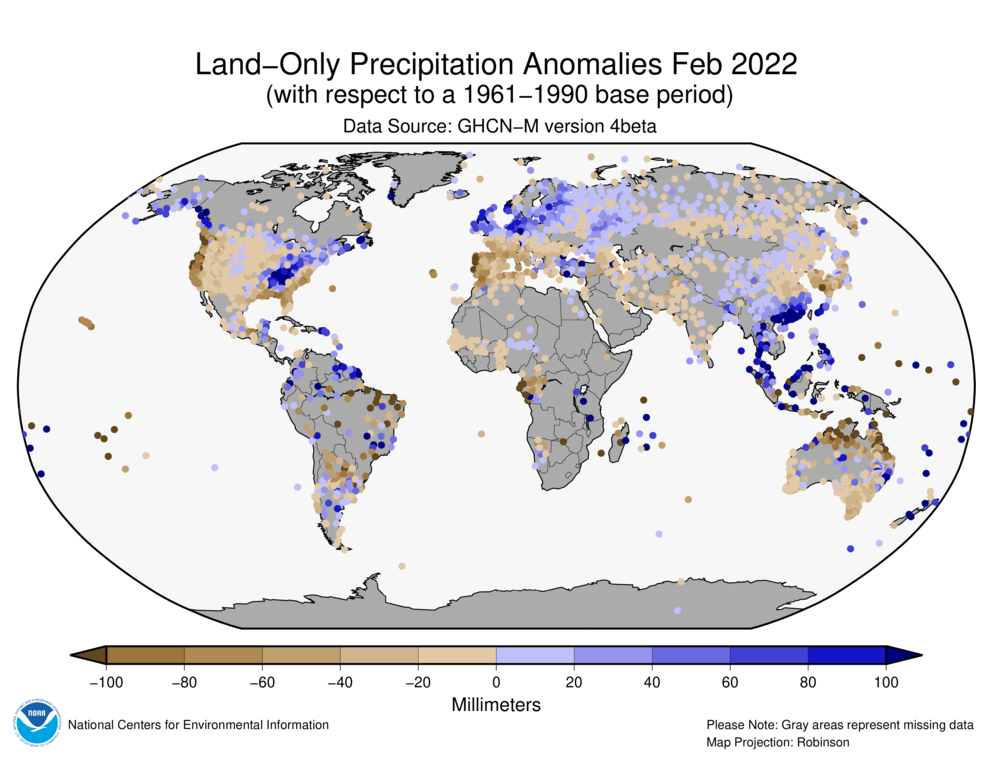 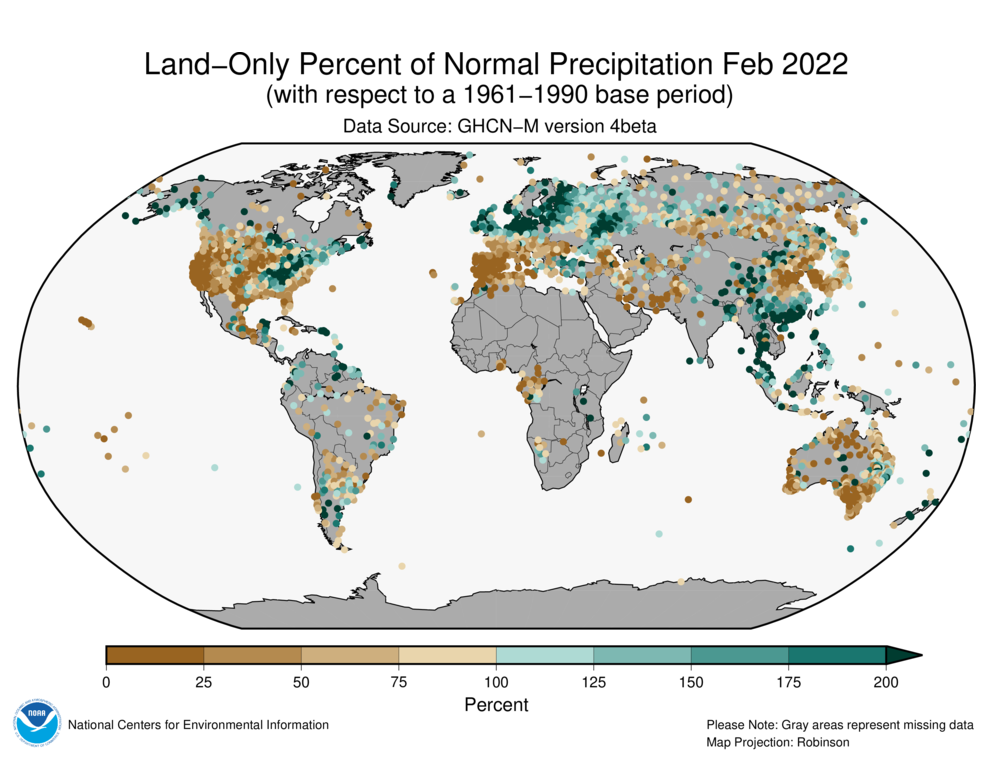 As is typical, precipitation anomalies during February 2022 varied significantly around the world. February precipitation was generally drier than normal across the western, central, and southeastern parts of the contiguous U.S., northeastern Brazil, northern Argentina, southern Chile, southern Europe, southern/eastern parts of Asia, and Australia. Wetter-than-normal conditions were notable across parts of the eastern contiguous, Alaska, northern Europe, western Russia, and eastern and southeastern Asia.

The United Kingdom's precipitation total for February 2022 was 152% of normal, resulting in the eighth-wettest February since national precipitation records began in 1836.

According to the Hong Kong Observatory, a stronger-than-normal winter monsoon affected southern China during February 2022, contributing to wetter and cooler conditions during the month. During February 19–22, rain fell continuously, contributing to Hong Kong's monthly total of 168.5 mm (6.6 inches), which is more than four times the normal monthly value (38.9 mm / 1.5 inches). The January–February 2022 period had an accumulated total of 172.6 mm (6.8 inches)—over two times the normal value of 71.9 mm (2.8 inches).

Drier-than-average conditions engulfed much of Spain during February 2022, with only 10.9 mm (0.4 inch) or 21% of normal precipitation for the month. This value was the third lowest for February since national records began in 1961.

Heavy rain in northern Puerto Rico at the beginning of the month triggered dangerous floods, landslides, downed trees and power lines, forcing authorities to close several main roads. It was reported that up to 152 mm (6 inches) of rain fell within six hours. According to media reports, the town of Toa Alta had the most rain with 406 mm (16 inches) during February 4–6. The city of San Juan, Puerto Rico's capital, had a monthly rainfall total of 301 mm (11.85 inches), which is San Juan's wettest February on record and the eighth-wettest month for any month on record, according to data obtained from the San Juan National Weather Service.

According to the World Meteorological Organization, the city of Petropolis (located north of Rio de Janeiro) set a new record precipitation record when a total of 258.8 mm (10.2 inches) fell in just 24 hours on February 15. The torrential rain prompted flash floods that caused widespread damage and was responsible for at least 30 fatalities.

Cyclone Emnati impacted Madagascar just days after Cyclone Batsirai and Tropical Storm Dumako—the first time since January 1988 that three storms made landfall in Madagascar in a single month. Emnati brought strong winds and heavy rain to the region. Homes were flooded or damaged and several communities were left without power and water.

According to the Bureau of Meteorology, heavy rain fell in southeastern Queensland from February 22–28, with several locations receiving over twice their February average rainfall. The torrential rains have caused significant floods. Of note, the Mary River at Gympie reached its highest level since 1893. 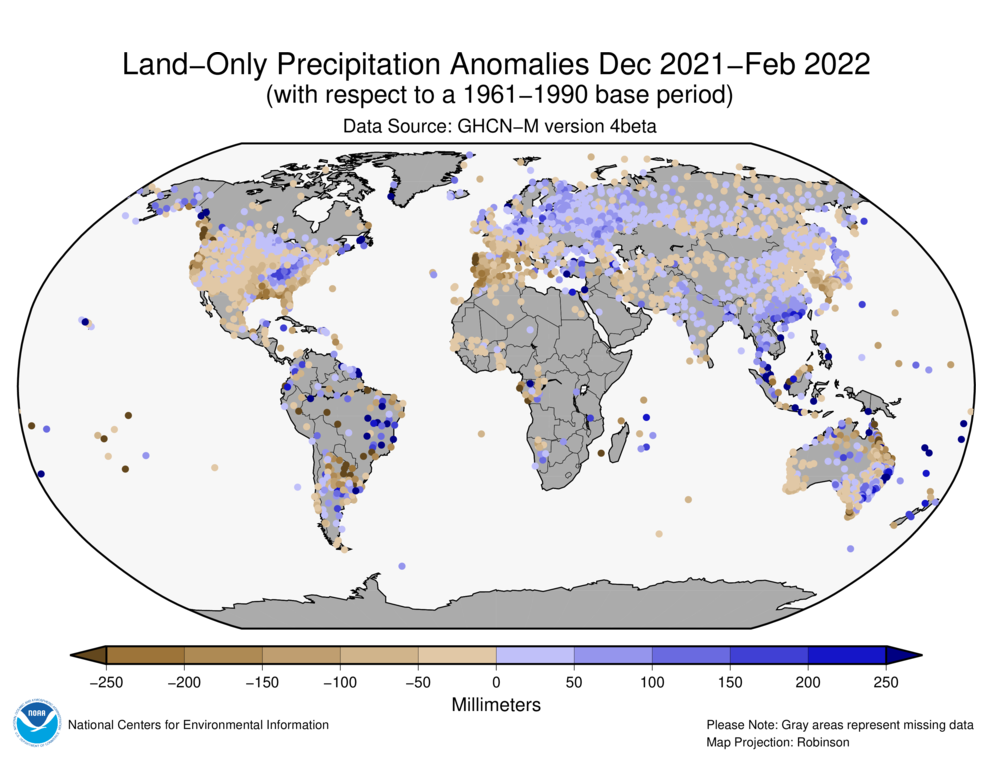 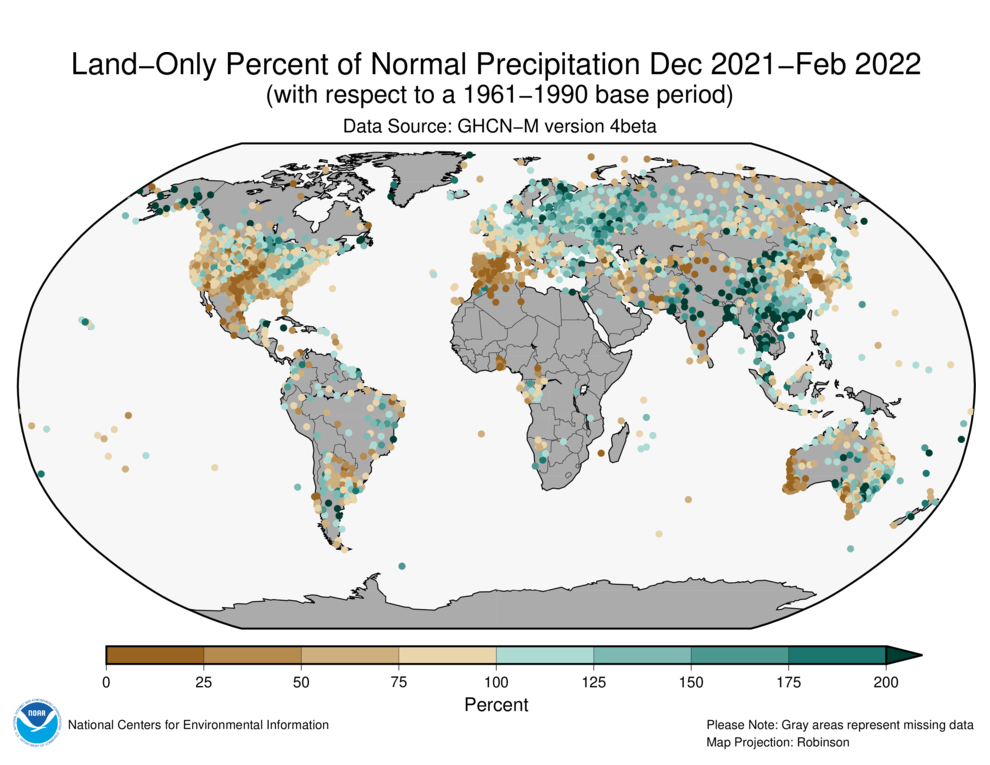 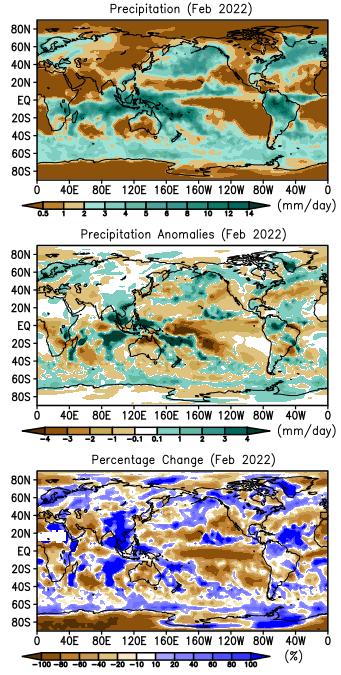 February, the last month of the Northern Hemisphere's meteorological winter had its tropical precipitation patterns pushed to the south across the Atlantic, Pacific and Indian Oceans and the South American and African continents (see the mean precipitation map for this month in Fig. 1 [top panel]). In mid-latitudes precipitation features stretch from the eastern U.S. through the North Atlantic into Europe and from eastern China to northwest North America. The anomaly patterns in the bottom two panels of Fig. 1 display features across the tropical Pacific that are typical for La Niña conditions, with positive anomalies over the Maritime Content and northern South America and a negative anomaly centered at about the international date line and extending to the east to the South American coast and southeastward into the South Pacific. This typical La Niña pattern is related to lower-than-average SSTs in the central/eastern Pacific along the Equator and these temperature and rainfall conditions have been persistent to a varying degree for almost two years (roughly the timeline of the Covid epidemic). This lengthy La Niña is also atypical in that it developed on its own and didn't originate immediately following an El Niño event, as often happens.

Outside the tropical Pacific the La Niña effect is also evident in some other locations, including the dry (negative anomalies) zone extending northeastward from the western Pacific, across Hawaii and into the southwestern U.S. and Mexico. This typical La Niña feature has helped to extend in time and increase the intensity of the long-term drought in the southwest U.S. On the wet side, the La Niña-related positive anomaly features over the Maritime Continent and northern South America were associated with rainy season floods and landslides in Malaysia and Indonesia and also in Ecuador, Colombia and Brazil.

Australia typically has above average rainfall under La Niña conditions, but the maps in Fig. 1 show a mixed pattern, with rainfall deficits, especially to the north, but a small, but intense, positive anomaly centered on the country's east coast. This feature was associated with recurring storm systems that pummeled southeast Queensland and the Brisbane area further south with very heavy rains and devastating floods late in the month. The Indian Ocean has a spotty anomaly pattern, and was a scene of tropical cyclone activity during the month. A trio of storms tracked from the central part of the ocean southwestward and targeted Madagascar and Mozambique. Their precipitation and their movement produce the narrow tracks and maxima surrounding the island country. The results were floods and landslides and loss of life.

Further poleward, Pacific extratropical systems stayed predominantly north of the U.S. west coast for the month, but with positive anomalies into Alaska and into western Canada. In the mid-latitude Atlantic the storm track, as indicated by the precipitation anomalies, is shifted toward the north this month. The associated positive anomaly crosses New England and Canada's maritime provinces and stretches across the ocean and into the United Kingdom and northern Europe. Embedded in this monthly mean feature are cyclone-scale intense systems that brought floods to the UK, for example.

On a global scale, the ocean has a small deficit from the long-term mean, while the land is near neutral, somewhat typical for La Ni–a conditions. This leads to a global (land + ocean) total for this February of 2.70 mm d-1, slightly under the 1979–2021 mean.

For the last three months (December–February) the mean map and the anomaly pattern (Fig. 2, top and middle panels) display the usual climatological features, but with many of the positive and negative anomaly features typical of La Niña that has continued during this season. The La Niña connection is emphasized by the bottom panel which shows a composite for the season of previous months where La Niña was present. Comparing the composite to the anomaly map for this past season, it is immediately obvious that there is a positive correlation in the patterns from the Maritime Continent eastward through the tropical (and mid-latitude) Pacific into the Americas and extending into the Atlantic (again both in the tropics and in mid-latitudes). The pattern for the season across North America, and over the ocean on both sides, is very similar to the la Niña composite. Over Australia, which typically has significant rains during La Niña, the last three months show a more mixed pattern, although a positive anomaly in the southeast of the country is linked to the February floods already noted. Other regions have non-La Niña related anomalies, including the African continent, and southern Asia which generally shows a positive anomaly in what is normally the dry season there.