There is a dedicated web-site summarizing Katrina's development and impact available. The Accumulated Cyclone Energy (ACE) Index values are available for all Atlantic storms in 2005.

Hurricane Katrina was one of the strongest storms to impact the coast of the United States during the last 100 years. With sustained winds during landfall of 125 mph (110 kts; a strong category 3 hurricane on the Saffir-Simpson scale) and minimum central pressure the third lowest on record at landfall (920 mb), Katrina caused widespread devastation along the central Gulf Coast states of the US. Cities such as New Orleans, LA, Mobile, AL, and Gulfport, MS bore the brunt of Katrina's force and will need weeks and months of recovery efforts to restore normality.

Hurricane Katrina developed initially as a tropical depression (TD #12 of the season) in the southeastern Bahamas on August 23rd. This tropical depression strengthened into Tropical Storm Katrina the next day. It then moved slowly along a northwesterly then westerly track through the Bahamas, increasing in strength during this time. A few hours before landfall in South Florida at around 6.30pm EDT on August 25th, Katrina strengthened to become a category 1 (windspeeds of 75 mph or greater) hurricane. Landfall occurred between Hallandale Beach and North Miami Beach, Florida, with windspeeds of approximately 80 mph. Gusts of above 90 mph were measured as Katrina came ashore. As the storm moved southwest across the tip of the Florida peninsula, Katrina's winds decreased slightly before regaining hurricane strength in the Gulf of Mexico. Given that Katrina spent only seven hours over land, its strength was not significantly diminished and it quickly re-intensified shortly after moving over the warm waters of the Gulf. 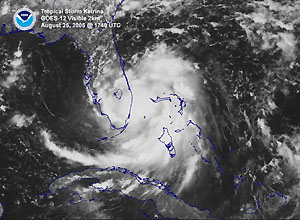 Katrina moved almost due westward after entering the Gulf of Mexico. A mid-level ridge centered over Texas weakened and moved westward allowing Katrina to gradually turn to the northwest and then north into the weakness in the ridging over the days that followed. Atmospheric and sea-surface conditions (an upper level anticyclone over the Gulf and warm SSTs) were conducive to the cyclone's rapid intensification, which led to Katrina attaining 'major hurricane' status on the afternoon of the 26th.

Continuing to strengthen and move northwards during the next 48 hours, Katrina reached maximum windspeeds on the morning of Sunday August 28th of 150 kts (175 mph, category 5), and its minimum central pressure dropped to 902 mb - the 4th lowest on record for an Atlantic storm. Although Katrina at its peak strength was comparable to Hurricane Camille's (1969) intensity, it was a significantly larger storm and impacted a broader area of the Gulf Coast.

Although tropical cyclones of category 5 strength are rarely sustained for long durations (due to internal dynamics), Katrina remained a strong category 4 hurricane despite the entrainment of drier air and an opening of the eyewall to the south and southwest before landfall on the morning of the 29th (go to NCDC's NEXRAD viewer site for additional radar imagery and animations of Katrina). Landfalling windspeeds at Plaquemines Parish in southeastern Louisiana were approximately 140 mph with a central pressure of 920 mb - the 3rd lowest on record for a landfalling Atlantic storm in the US. Rainfall amounts for Louisiana and along the Gulf are described in a separate page summarizing Katrina's impacts along with other effects of the storm.

Track of Hurrican Irene
Image courtesy of Univ. of Wisconsin/CIMMS

Harvey became a tropical storm on August 3rd southwest of Bermuda. The storm passed within 45 miles of Bermuda on a northeasterly track and reached a peak intensity of 65 mph causing gusts of over 50 mph on the island of Bermuda. Harvey lost tropical characteristics on August 8th about 535 miles southeast of Cape Race, Newfoundland. Hurricane Irene was a long-lived storm originating from a tropical wave moving off the coast of Africa. The storm reached tropical storm strength on August 7th in the central tropical Atlantic, weakened back to a tropical depression, then regained tropical storm strength on August 10th. Irene turned northwestward and moved between Cape Hatteras, NC and Bermuda on August 14th, then curved towards the northeast becoming a hurricane, reaching its peak intensity of 105 mph on the 15th. The hurricane then turned eastward and weakened over cooler waters, becoming extratropical on the 18th.

Tropical Storm Jose was short-lived, forming on August 22nd in the Bay of Campeche and made landfall later that evening about 35 miles north of Veracruz, Mexico, with sustained winds of near 50 mph. Tropical Storm Lee was also short-lived forming in the central tropical Atlantic on August 31st and dissipating by the following observation, 6 hours later.

Track of Hurrican Fernanda
Image courtesy of Univ. of Wisconsin/CIMMS

Hurricane Fernanda developed into a tropical storm from a tropical depression on August 10th about 700 miles south-southwest of Cabo San Lucas. The storm moved west northwest as it strengthened, becoming a hurricane on the 11th. A peak intensity of 75 kts (86 mph) was reached on the 14th before Hurricane Fernanda moved over cooler waters and began weakening. Moving south-southwest, Fernanda dissipated on the 17th.

Tropical Storm Greg formed on August 11th about 700 miles south of Cabo San Lucas. A peak intensity of 45 kts (50 mph) was reached the following day while the storm moved west-northwest. Greg weakened to a tropical depression on the 14th after northerly shear weakened the storm.

Track of Hurrican Hillary
Image courtesy of Univ. of Wisconsin/CIMMS

Hurricane Hilary was the strongest storm in the eastern North Pacific in August 2005 and was the only one to affect land. On August 20th Hilary became a tropical storm about 200 miles south of Salina Cruz, Mexico. The storm moved west and then turned more to the north paralleling the Mexican coast approximately 250 miles offshore. Becoming a hurricane on the 21st, Hilary's wind field broadened bringing tropical storm force winds to the Mexican coast near Manzanillo. Hurricane Hilary reached a peak windspeed of 90kts (104 mph) on August 22nd as it moved away from the coast. Traveling over cooler waters to the west-northwest, the storm weakened to tropical storm strength on the 24th and then to a depression the following day.

Tropical Storm Irwin formed on August 26th southwest of Manzanillo, Mexico. A peak intensity of 45 kts (50 mph) was recorded later that day and Irwin slowly weakened on the 27th becoming a tropical depression on the 28th about 575 miles southwest of Cabo San Lucas, Mexico.