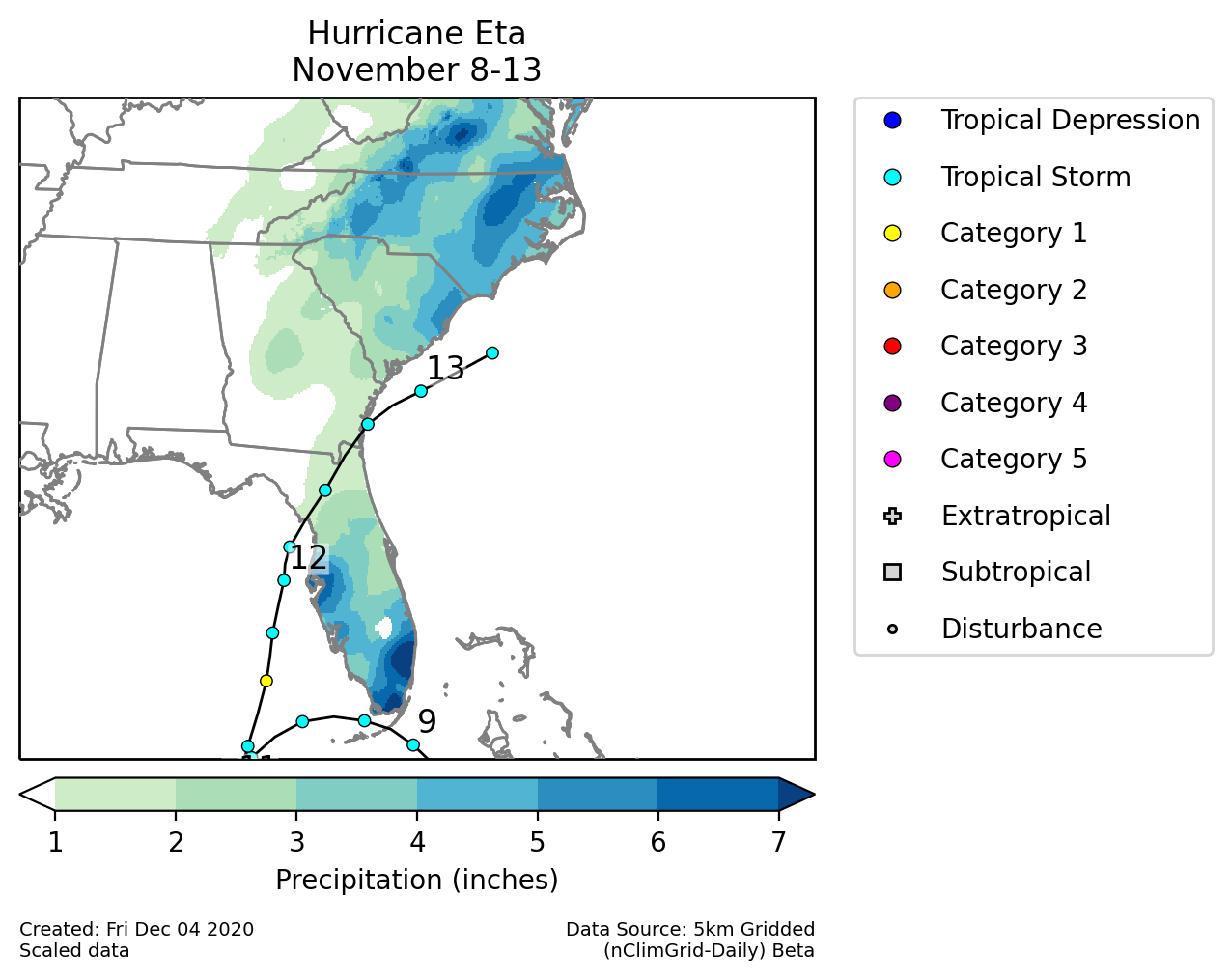 The North Atlantic maintained its extremely active pace in November. Three named storms developed in November, which ties the record. Two of those became major hurricanes, which sets a new record. Only eight Novembers since 1851 had even one major hurricane, let alone the two that occurred in November 2020.

Hurricane Eta was the first of the two major hurricanes in November. It developed as a tropical depression on October 29 but was first named on November 1. Within 48 hours, Eta was a category 4 hurricane with winds of 150 mph just before landfall in Nicaragua. It weakened almost as quickly as it interacted with the mountainous terrain but not before producing catastrophic flooding across Central America. The storm reemerged over the Western Caribbean on November 6, but it struggled to reorganize. It crossed Cuba and the Florida Keys before briefly regaining hurricane strength in the Eastern Gulf of Mexico. It eventually weakened again before landfall in Central Florida. Despite its weaker winds, Eta's moisture combined with a strong cold front to bring heavy rain from Florida to the Mid-Atlantic.

Hurricane Iota mirrored much of Eta's evolution in the Western Caribbean and Central America. Iota became a tropical storm less than 100 miles from where Eta had 12 days later. Iota underwent a similar period of rapid intensification, going from 45 mph to 160 mph in 48 hours. Iota was the strongest storm of the 2020 season and the latest category 5 hurricane on record in the Atlantic. Iota made landfall in Nicaragua within 15 miles of where Eta had gone ashore less than two weeks before. Iota dissipated over Central America, unlike Eta, but not before bringing more devastating flooding to the region.

November 30 marked the official end of the record-breaking 2020 Atlantic hurricane season. It included 30 named storms, which tops the previous record of 28 set in 2005. The 13 hurricanes and 6 major hurricanes in 2020 are both the second most on record behind 2005 (15 and 7, respectively). Twelve named storms made landfall in the continental U.S. during 2020. This exceeds the previous annual record of nine landfalls set in 1916. Of those 12 named landfalling storms, six were hurricanes, which ties 1886 and 1985 for the most U.S. hurricane landfalls in a single season.

The East Pacific produced two weak and short-lived tropical storms. Tropical storms typically form in the East Pacific once every 2 or 3 Novembers, but 2020 marked the third straight year and sixth in the last seven to have a November storm. Despite this November activity, the 2020 East Pacific hurricane season ranks near the bottom third for most measures of activity since 1981.

The West Pacific had three named storms plus the remnants of Super Typhoon Goni, which formed in October. Super Typhoon Vamco was the only West Pacific storm to strengthen beyond a tropical storm in November. The West Pacific also remains much quieter than normal, ranking in the bottom third of years since 1981 for most activity metrics.

The North Indian Ocean had two tropical storms, including Major Cyclone Gati. Gati was short-lived, but rapidly intensified from 40 mph to 115 mph in 12 hours according to the Joint Typhoon Warning Center (JTWC). Gati was the first hurricane-strength cyclone to make landfall in Somalia in JTWC's database dating back to 1972.

The South Indian Ocean had one Category 1 strength cyclone, Alicia. Alicia was the first Southern Hemisphere cyclone of the 2020-2021 season, which began July 1. Climatologically, about 3 storms typically form in the Southern Hemisphere during July-November.