October marks the beginning of the cold season across the U.S. and snow typically begins to fall across the Northern tier of the country, as well as the high terrain of the West. October brought warmer–than–normal conditions to most of the country, which tended to limit the amount of accumulating snowfall. According to the Rutgers Global Snow Lab, a NOAA supported facility, the average snow extent across the United States for October 2010 ranked as 19th smallest (25th largest) in the 43–year satellite record at 29,300 square miles (76,000 square km) — 29,000 square miles (75,000 square km) below the long–term average of 58,300 square miles (151,000 square km). At the beginning of the month, only the highest mountain peaks had snow cover, which amounted to less than 0.01 percent of the entire contiguous United States. By the 31st, the area covered by snow increased to 4.7 percent of the country. Snow cover was confined to northern New England, the Northern Plains, and the high terrain in the Northern and Central Rockies, the Cascades, and the Sierra Nevada. 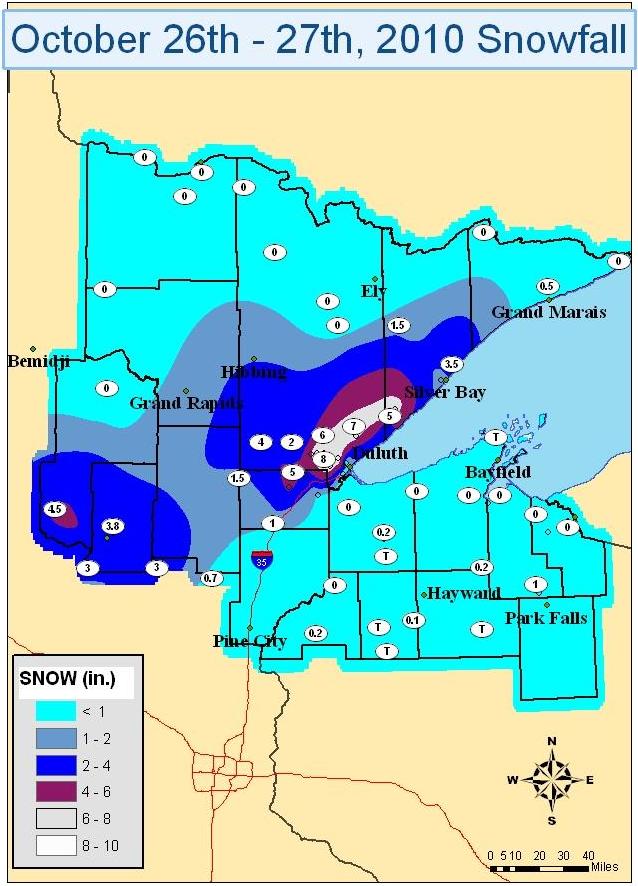 A record–breaking low pressure system moved across the Northern Plains on October 26th and 27th bringing blizzard conditions and the first snowfall of the season to the region. The system initially was associated with rain, but the liquid precipitation transitioned to snow as colder air filtered in behind the storm. Daily snowfall accumulation records were broken across Minnesota and North Dakota. Duluth, Minnesota experienced its fourth greatest October storm snowfall with 7.7 inches (19.6 cm) of accumulation. Heavy snowfall stretched into North Dakota, with snow accumulation reports of 13 inches (33 cm). On October 26th–27th, blizzard warnings were present for most of the state of North Dakota with widespread heavy snow and strong winds [gusting to 70 mph (113 km/hr)].