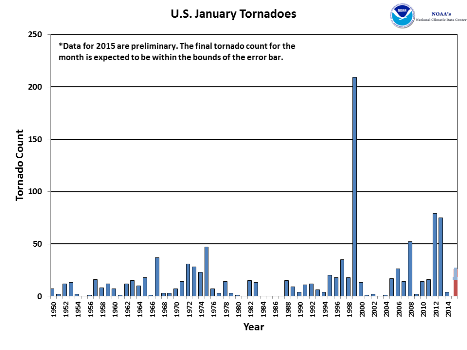 According to data from NOAA's Storm Prediction Center, during January, there were 26 preliminary tornado reports. This is below the 1991-2010 average of 35 for the month. Tornado activity during January is highly variable with some Januaries being very active and others have few or no observed tornadoes. Since reliable records began in 1950, there have been seven times that no tornadoes were reported during January. The most active January was in 1999 when there were over 200 tornadoes reported. 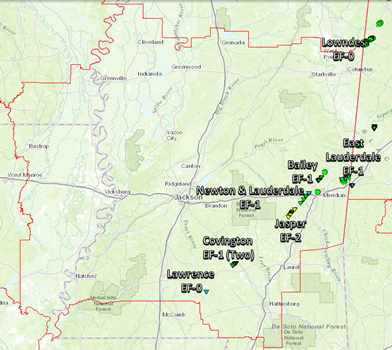 Nearly all of the January 2015 tornado reports, 23, occurred on January 3rd and 4th across the Southeast. A strong upper level low moving through the Central Plains spawned a cold front that moved through the Southeast. Very warm and moist conditions were observed ahead of the front with dewpoint temperatures above 70°F. Most of the tornado activity was focused in eastern Mississippi, where a long-lived supercell thunderstorm produced at least eight confirmed tornadoes through its lifecycle, including an EF-2 in Jasper County. The EF-2 had estimated winds of 130 mph and was on the ground for 8.1 miles. The tornado destroyed several mobile homes and caused extensive tree damage. Fortunately no fatalities or injuries were reported from this outbreak. The storm system also dropped over 4 inches of rain in eastern Mississippi, which caused significant flash flooding and washed out roads. According to the National Weather Service, record amounts of moisture for the month of January were observed in the evening weather balloon sounding at the Jackson, Mississippi, International Airport, where the precipitable water value of 1.74 inches tied the record last set on January 3, 1973.