The data presented in this drought report are preliminary. Ranks, anomalies, and percent areas may change as more complete data are received and processed, but they will not be replaced on these pages.

The year was characterized by considerable variability in moisture conditions, both regionally and on a month-by-month basis. More than 20 percent of the CONUS experienced very dry precipitation anomalies (at the tenth percentile of the historical record or drier) during March, while five months (May, July, October, November, and December) had 20 percent or more of the country experiencing very wet anomalies (monthly precipitation totals at the 90th percentile of the historical record or wetter). When averaged together, the wet and dry anomalies resulted in the 24th driest January and February, and 23rd driest March, in the 1895-2015 record, but the wettest May, ninth wettest June, fourth wettest November, and wettest December.

Regionally, drought persisted across much of the West, especially California and Nevada. Persistent heavy precipitation from Pacific weather systems during December brought significant drought recovery to the Pacific Northwest. In New Mexico, 2015 saw above-normal precipitation which continued the recovery from the state's multi-year drought. Moderate drought persisted in the Northeast during most of 2015. In the Southern Plains, especially Oklahoma and Texas, heavy spring rains terminated a years-long drought, but extreme summer dryness triggered the return of short-term drought, which was quashed in late autumn by another round of heavy rains. Short-term drought developed in various months in other regions, only to fade away with the return of above-normal precipitation. These regions include the Northern Plains, Lower-Mississippi Valley, and Southeast. Drought developed in Puerto Rico in May and continued through the end of the year. Certain U.S.-Affiliated Pacific Islands also experienced bouts of dryness during 2015.

Percent area of the West in moderate to extreme drought since 1996 (based on the Palmer Drought Index).

The drought in the West was most visibly manifested by low reservoir levels and a dismal mountain snowpack during the 2014-2015 snow season. With six of the previous eight years having below-average precipitation, 2015 began with low reservoirs in Arizona, California, Nevada, New Mexico, and Oregon. By the end of 2015, statewide reservoir levels were still low in these five states and were also below average in Idaho, Utah, and Washington. Unusually warm temperatures during the 2014-2015 snow season, and for the last three to four decades, contributed to a well below-normal snow pack. At the time of year (beginning of April) when the snow pack should be at its peak, many western mountains already had their snowpack melted out and were snow-free. Instead of falling as snow, the winter precipitation fell as rain due to the warmer-than-normal temperatures, resulting in a snow season precipitation pattern that looked near normal in many areas. A thick winter snowpack is very important to western hydrology as it provides much-needed meltwater during the summer dry season.

The drought during 2015 has been centered in California to southern Oregon and extended across the Pacific Northwest and into northern Nevada. In California, 2015 ranked third driest for January-November and January-April. Precipitation in December was enough to give the state a rank of 13th driest for the year. But temperatures have been record to near-record warm, with 2015 ranking as the second warmest year and 2014 the warmest year in the 1895-2015 record for California. When warm temperatures are factored in with low precipitation, as in the Standardized Precipitation Evapotranspiration Index (SPEI), California had the second most severe drought year on record during 2015. The persistent unusual warmth of the last several decades contributed to the state having the most severe SPEI for the last 36, 48, 60, and 72 months.

In the Pacific Northwest, precipitation fell during the 2014-2015 winter but it was largely rain instead of snow, which contributed to a "snow drought". But even the rains let up earlier than normal during the spring, with Washington having the second driest April-July and fifth driest April-September. Oregon had the fifth driest January-September. Abundant precipitation returned to the Pacific Northwest states during the late fall and December, significantly contracting drought.

This was a wet year for the Southwest, especially for New Mexico where 2015 was the fifth wettest year. This was the first year since 2010 wetter than the long-term average in the state. At its peak, drought in New Mexico gave the state the third driest year in 2012 and eleventh driest year in 2011. Abnormal dryness in western New Mexico on the December 29th, 2015 USDM map reflects continuing low reservoirs.

A severe drought developed in the Southern Plains in October 2010. The dry weather lasted for more than four years, giving Texas the fourth driest 60-month period (March 2010-February 2015) in the 1895-2015 record, based on both precipitation and the SPEI. Oklahoma had the ninth driest such 60-month period. The dry weather was accompanied by very hot temperatures in Texas, especially during 2011-2012, with March 2010-February 2015 ranking as the second warmest such 60-month period for the state. This long-term drought was ended when very heavy rains occurred during the spring of 2015. Texas had the fourth wettest March, wettest May, and wettest April-July on record. Oklahoma had the 17th wettest April and wettest May.

Very dry conditions returned to the Southern Plains during the summer, with flash drought conditions developing in Texas, Oklahoma, and adjoining Louisiana. Texas had the twelfth driest July-September and eleventh driest August-September. Heavy rains returned in the fall, once again eliminating drought. November ranked wettest on record for Oklahoma, and both Oklahoma and Texas had the wettest October-December and January-December on record.

Moderate drought persisted in the Northeast for much of 2015. The first half of the year was a particularly dry period, especially Spring. Connecticut had the driest February-May on record, Massachusetts and Rhode Island the second driest April-May, Massachusetts the fourth driest March-May, Connecticut the fifth driest March-May, New Hampshire the sixth driest January-May, and Vermont the eighth driest February-May. Dryness returned to Connecticut during the summer with the state having the sixth driest July-August. Connecticut was the epicenter of drought in the Northeast, having the fourth driest year in 2015. The last four years have been persistently drier than average, giving the state the sixth driest 48-month period (January 2012-December 2015). 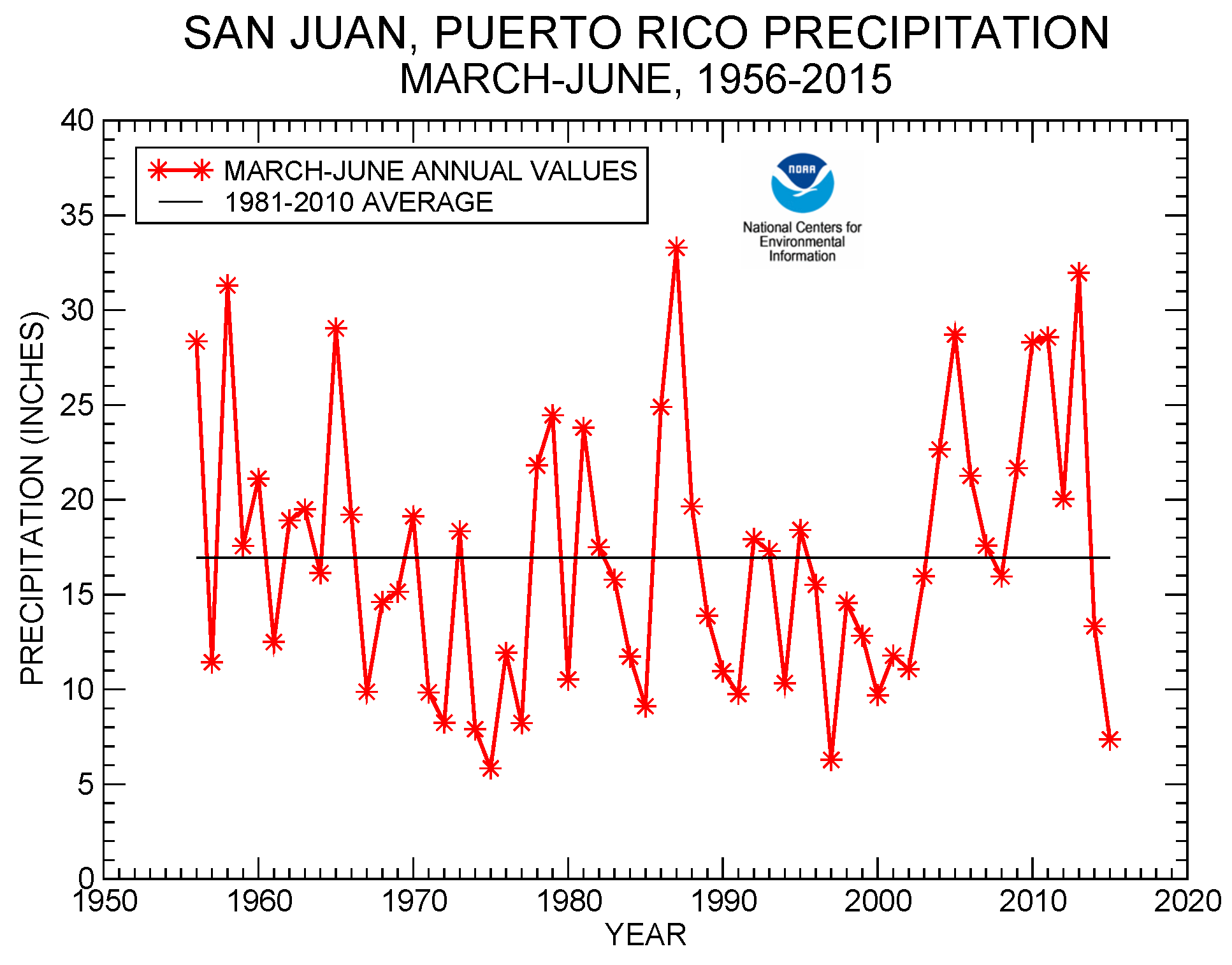 Parts of Puerto Rico were dry at the beginning of 2015, but it wasn't until spring when the dryness spread across most of the island. By June, impacts included low to record low streamflow in the streams on the eastern half of the island, decreasing groundwater and reservoir levels, and water rationing. In San Juan, June 2015 was the 14th driest June in the 1956-2015 record, May-June and April-June each ranked fourth driest, and March-June 2015 was the third driest such 4-month period. Moderate to extreme drought rapidly expanded to cover 63.8 percent of the Commonwealth by mid-August, the greatest extent of drought for Puerto Rico in the 2000-2015 USDM record. Beneficial rains helped reduce the drought area during fall, but moderate to extreme drought still covered 41.7 percent of Puerto Rico by year's end.

In Hawaii, the year began with a rapid expansion of moderate drought to cover 53.9 percent of the state by early March. Drought contracted to about 19.8 percent by Mid-May, but it expanded again to 25.5 percent in moderate to severe drought by mid-July. Beneficial fall rains dropped drought coverage to zero by the end of September. 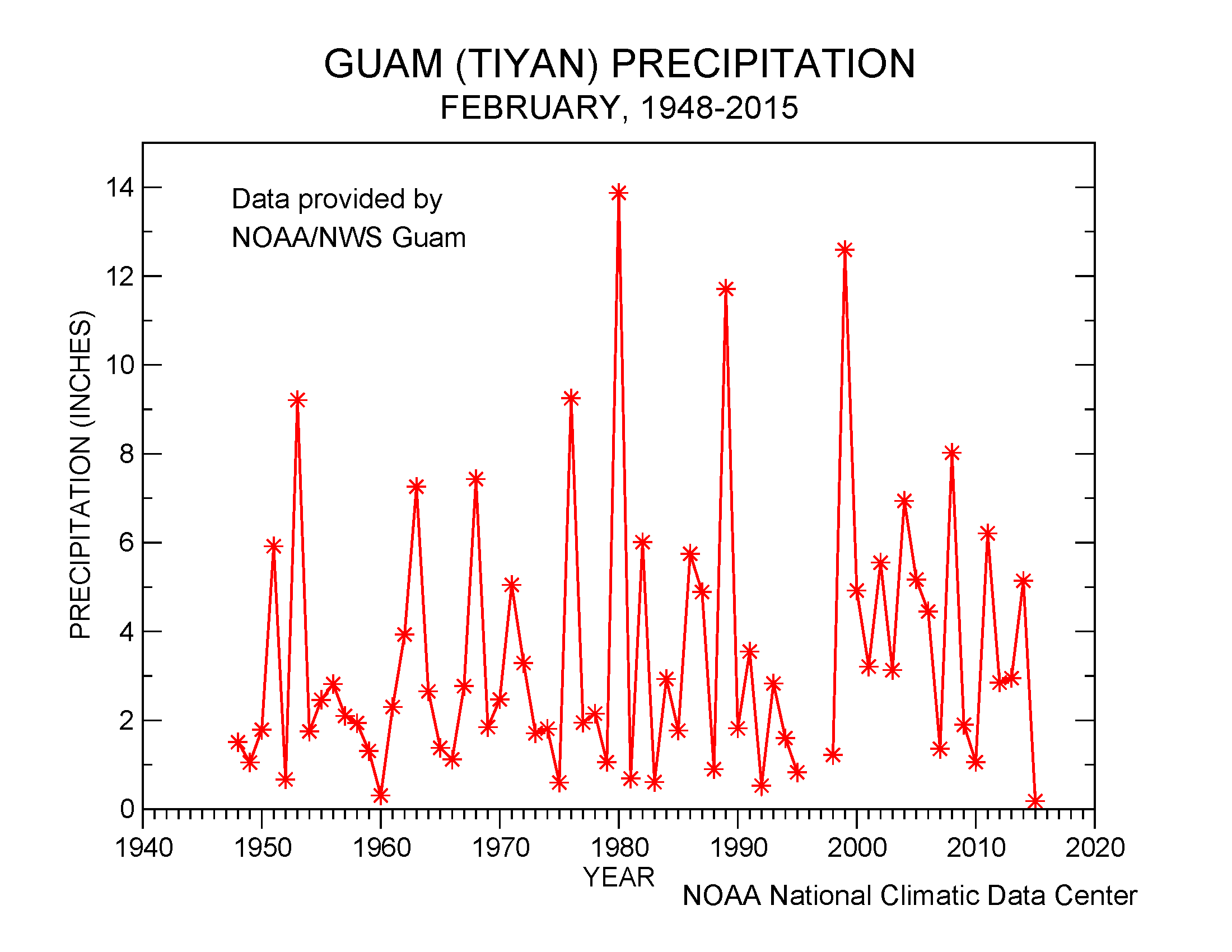 Dry conditions occurred across some of the U.S.-affiliated islands in the Pacific Ocean (USAPI) during parts of 2015. Guam reported the driest February in the station's 1948-2015 record. Continued dry conditions in the Republic of Palau during January-May prompted the NOAA National Weather Service (NWS) to issue a Drought Information Statement at the beginning of June, but beneficial rains occurred over Palau during June and July. In American Samoa, Pago Pago received very low rainfall amounts for July-September, with the NWS issuing a drought statement warning of severe drought conditions. According to Global Historical Climatology Network (GHCN) data, July-September 2015 was the 11th driest July-September in the 1966-2015 record at Tafuna in American Samoa. As with Palau, beneficial rainfall returned to American Samoa in October.

Dry conditions returned to the Republic of Palau, and developed in Yap State in western Micronesia, during October-December. By October, Kosrae was reporting water shortages. In early January 2016, the NWS issued a Drought Information Statement for developing drought conditions in the Republic of Palau, Yap State in Micronesia, and the Marshall Islands, and a Public Information Statement for possible drought conditions that may develop in the Mariana Islands. According to GHCN data, Yap had the driest October-December in the 1951-2015 record and Koror the second driest in their 1951-2015 record. Many other stations in the western and northern parts of the USAPI region have had very dry conditions during October-December.