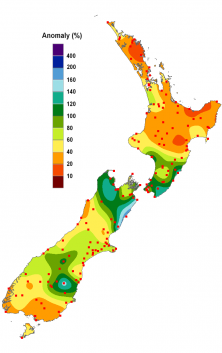 In the wake of a severe drought in New Zealand, a ban on outdoor water use was necessitated from March 16th through April 9th for the Wellington region on the North Island. Reservoirs in the capital city contained only a 19-day water supply, according to media reports. In Auckland, an outdoor fire ban was imposed. However, community conservation efforts and localized rainfall permitted a lax of the restrictions. Areas of the country's north and east received little rain since October 2012, although remnants of post-tropical cyclone Sandra brought some relief with heavy rain to the lower North Island on March 18th. Deemed the worst drought in 30 years, farmers resorted to slaughter of dairy cattle and sheep due to fodder shortages and lack of water, while the surplus in livestock for retail caused market prices to plummet. Consequently, the reductions in herd size served to lower overall milk production. Physical condition of the sheep suffered in terms of weight loss and reproduction, while lessening the number of new lambs expected next year. Economic losses in export revenue were estimated in value at $820 million U.S. dollars. The farm industry's annual exports provide the country with revenue valued at around $20.6 billion U.S. dollars. A positive aspect of the drought emerged for grape growers and winemakers as the drier weather is ideal. New Zealand's annual wine exports yield revenue in value at about $1 billion U.S. dollars.

Bitter cold swept parts of Eurasia during March, as high pressure anchored to the north of Scandinavia funneled Arctic air over the region. Minimum temperatures in central Sweden dipped to -22.0°C (-7.6°F) on March 11th, according to media reports. On March 9th, nighttime temperatures lowered to -15°C (5.0°F) in southwestern Siberia, where at least seven persons died of asphyxiation in their vehicles while trapped in deep snow. Between March 21st and 26th, five people succumbed to the frigid cold of -24°C (-11.2°F) in Poland, bringing the country's hypothermia deaths to 25 for the month. On March 25th, multiple locations in Austria experienced "Eistag" or an "ice day" (the entire day's temperatures remained below 0°C (32°F)). An ice day occurrence after March 20th is unusual, having a return period of 50 to 60 years, according to the Zentralanstalt fur Meteorologie und Geodynamik (ZAMG). Of the country's five locations observing this extreme cold in 2013, it was the first event for the site at Klagenfurt in records kept since 1900. Germany's monthly mean temperature of 0.1°C (32.2°F) was the fifth coldest March in records kept since 1881, according to the Deutschen Wetterdienst (DWD), Germany's National Meteorological Service, as well as the second coldest March in the last 50 years, after March 1987. Based on the United Kingdom (UK) Met Office's provisional March data, the UK's mean temperature for the month of 2.2°C (35.9°F) tied with 1947 as the second coldest March in records kept since 1910.

Conversely, in the Southern Hemisphere, southeast Australia endured a prolonged heatwave during the first half of March. A near-stationary high pressure system in the Tasman Sea directed a northerly flow of warm air above the South Pacific Ocean onto the continent. As land temperature departures exceeded 6.0°C (10.8°F) above the 1961-1990 average, the surrounding sea surface temperatures also ran high. The waters of the Coral Sea ranged from 0.5°C to 2.0°C (0.9°F to 3.6°F) above average, while parts of the Indian Ocean reached record or near-record temperatures, according to media reports.

Heavy rains inundated several parts of Africa during March, according to media reports. Flash floods and hail destroyed crops and at least five structures in the Mbale district of Uganda on March 9th, where twelve people were injured. Over 1,300 residents were displaced and at least 220 homes were damaged. The loss of crops to hail damage placed nearly 2,000 residents at risk of famine. Torrential rains on March 25th resulted in seven deaths and eight persons missing in the wake of river flooding on the continent's eastern coast in Djibouti. Those killed and missing were members of the Djiboutian Armed Forces attempting to deliver flood relief in the Wadi Hadley when their truck was swept away. Eleven of the 30 soldiers in the group were injured. Elsewhere, a rain storm in the state of Benue in Nigeria flooded over 200 homes on March 27th and left many residents without food or shelter.

Severe weather lashed South Asia during the month of March. At least six persons were killed by lightning in central India on March 16th, while seven people were injured, according to media reports. Four of the deaths and six injuries occurred in the Sagar district. Two deaths and one injury occurred in the Bhopal district. On the previous day, five people were injured by lightning in the Seoni district. The three districts are located within the Madhya Pradesh state of India. Hailstorms and thundershowers damaged crops and rooftops in numerous districts in southern parts of the state. High winds uprooted trees, which resulted in power outages in Bhopal. In northern India, hail caused extensive damage to orchards of plums, apricots, peaches, and cherries in the Kulla district of the Himachal Pradesh state.

Later in the month, states in eastern India experienced severe weather resulting in fatalities. On March 26th, six people were injured, windshields broken, and crops damaged by large hail stones falling in the Assam state. In the Uttar Pradesh state, at least three people were killed and six people seriously burned by lightning in the Bahraich district on March 26th, while across the state an additional nine people were killed by lightning, and another nine injured on March 29th.

In the neighboring country of Bangladesh, a tornado on March 22nd, resulted in the deaths of at least 26 people, while injuring more than 385 others, according to humanitarian reports. Over 1,400 homes (constructed of tin and mud) were destroyed and uprooted trees blocked highways and railways when the twister swept through numerous villages located to the southeast of Dhaka. The tornado overturned dozens of motor vehicles and large trucks. The Bangladesh Red Crescent Society provided tarpaulins for shelter and the United Nations World Food Programme provided high-energy nutritional biscuits, while the country's government distributed rice, monetary aid, and galvanized iron sheets to aid in structural repairs.

Parts of China and Southeast Asia suffered extreme weather events during the latter part of March. In southern China, five provinces experienced severe storms, which impacted over 1.5 million people and killed at least 24 people. About 215,000 residents were evacuated and nearly 250,000 structures were damaged. Economic losses were estimated at a value of $210 million in U.S. dollars. A tornado resulted in at least nine deaths and injuries to more than 270 people in the city of Dongguan, in Guangdong province on March 20th, according to media reports. Heavy rains and egg-sized hailstones associated with the region's extreme weather resulted in the capsizing of a ferry and 11 additional deaths near Nanping in the southeastern province of Fujian. Earlier in the day, a tornado in the Hunan province killed at least 3 people and injured over 50 people. The Hong Kong Red Cross distributed over 1,300 "family kits" in Hunan, with each kit containing a blanket, towel, clothing, mosquito net, slippers, a bucket, and dining utensils.

Large hail stones with diameters of up to 14 cm (5.5 in) battered the northern Vietnam mountain provinces on March 26th, according to media reports. One fatality, over 43 injuries, and damages to more than 10,000 homes resulted during multiple days of storms. 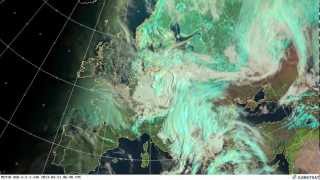 Heavy snowfall, ice, and high winds at mid-month over Europe rendered significant transportation disruptions, according to media reports. Northern France received up to 40.0 cm (15.7 in) of snow, which led to cancellation of airline flights as well as bus and train delays. High-speed rail services and freight transport halted as a result of the closure of the underwater Channel Tunnel between England and France from late March 11th to early March 12th. Rough seas along the northwestern coast of France stranded about 500 ferry passengers en route from Ireland for nearly 20 hours outside of port at Cherbourg. As many as 80,000 homes in France experienced power outages. Close to 12.0 cm (4.7 in) of snow in Germany forced closure of the Frankfurt airport and cancellation of about 700 flights on March 12th and over 350 flights on the next day. A huge traffic accident involving more than 100 vehicles and injuries of 20 people caused a shutdown of the highway near Munzenberg, while an accident the day before on icy roads claimed at least one life. Another winter storm quickly followed, which spread heavy snow up to 45.7 cm (18.0 in) from the Mediterranean to the Baltic Sea region. High winds up to 100 kph (62 mph) created drifts of snow up to 3 meters (9.8 ft) in Hungary. Thousands of people were stranded overnight on March 14th after tractor-trailer accidents on Hungary's highways blocked travel for as many as 5,700 vehicles, while more than 100 people were injured in traffic accidents. At least 8,000 travelers stayed in emergency shelters. Over 100,000 Hungarian residents experienced power outages during the harsh conditions. The winter weather produced similar travel disruptions in Belarus, as heavy snow induced traffic accidents, the Minsk airport's closure, and power outages. The Belarusian army provided help to clear the roadways. 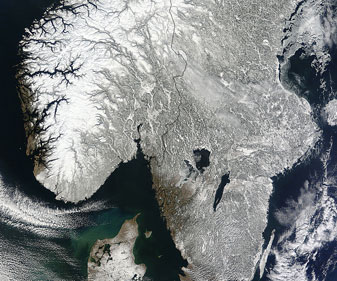 Later in March, heavy rains and snowfall occurred across the United Kingdom. Southwest England received over 5 cm (2 in) of rain, which caused flooding in Cornwall and at least one fatality. Around 18 metric tons of food and supplies were airlifted to the Isle of Man after ferry services were disrupted by the adverse weather. Northern Ireland, southern Scotland, and central England experienced blizzard conditions during March 23rd and 24th, where up to 61 cm (2 ft) of snow dropped, according to media reports. More than 43,000 homes in Northern Ireland lost power and numerous schools were closed. An estimated 10,000 sheep perished beneath snow drifts reaching to 6.0 m (19.7 feet).