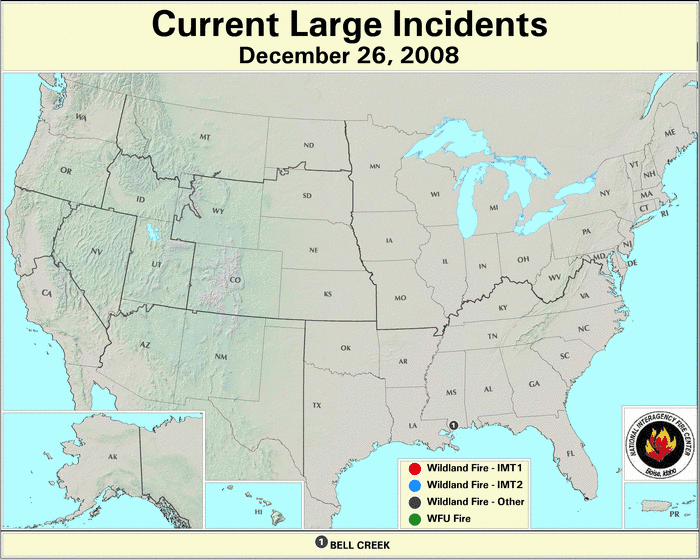 As 2008 came to a close, reports of new large fires dwindled across the nation. This marks the end of a relatively mild fire season for the United States as a whole, as compared to the previous years of 2007 and 2006. However, some areas of the nation experienced significant and costly fire activity in 2008. Severe to exceptional dryness occurred across many parts of the United States throughout much of the season, according to the U.S. Drought Monitor. Drought conditions and high fire risk were particularly persistent in areas of the Northwest and Southeast.

Fire activity was primarily clustered in the western and southeastern regions of the nation in 2008, declining to small areas of activity in the central U.S. by the end of November. Across the nation, the majority of fire activity occurred during the months of July and August. California suffered severe fires throughout the year, driven by high temperatures, dry conditions, and strong Santa Ana winds. Mid–November fires ravaged much of Southern California, resulting in the destruction of hundreds of dwellings.

Following the highly destructive wildfire seasons of 2006 and 2007, 2008 started off on the same track, with fewer fires, but more acreage burnt than average. Ample June precipitation accompanied a marked decline in acreage burned, dropping 2008 to levels below those of recent years. From July to November, a greater number of fires were reported, when compared to the 1985–2008 average, but with less acreage burnt. July and August were particularly active, with no fewer than 34 large fires burning across the nation at the end of July. Tragically, the 2008 wildfire season claimed the lives of 21 firefighters, according to news reports, including nine who died in a helicopter crash in Northern California in early August.

By year's end, only small areas in Texas, Hawai'i, California, and the Southeast U.S. were reporting extreme to exceptional drought. Fire danger also dropped to moderate levels across most of the U.S., except for portions of California, Texas, Kansas, and Nebraska, where risk remained high. This is a marked improvement over drought conditions present at mid-summer, when much of the Southeast, South, northern Great Plains, the West, and Hawai'i was in moderate to exceptional drought and fire danger was high to extreme over most of the western United States.

For the year as a whole, nearly 80,000 wildland fires burned more than 5 million acres (2 million hectares), according to preliminary year–end statistics from the National Interagency Fire Center (NIFC). These values rank 2008 near average in terms of the number of fires and above average for acreage burnt. The 2008 fire season's estimated 77,772 wildfires were 570 fires more than the 1985–2008 average of 77,202 fires. Acreage burnt in 2008 was approximately 518,502 acres (209,831 hectares) more than the 1985–2008 average of 4,641,405 acres (1,878,317 hectares), ranking 2008 as the ninth most acreage burnt since 1985, when NCDC considers reliable records to have become available. The quantity of acreage burnt in 2008 was close to 4 million fewer acres (1.62 million hectares) than either of the previous years of 2007 and 2006. Since the mid–1980s, the total number of acres burnt has gradually increased, though 2008 levels show a reduction to quantities lower than the four previous years. The number of wildfires reported by NIFC during that same period does not show a significant linear trend.

The wildfire season in the U.S. generally extends from March 1st through November 30th. The 2009 wildfire summary page will resume coverage in early April unless fire conditions in 2009 warrant an earlier start. 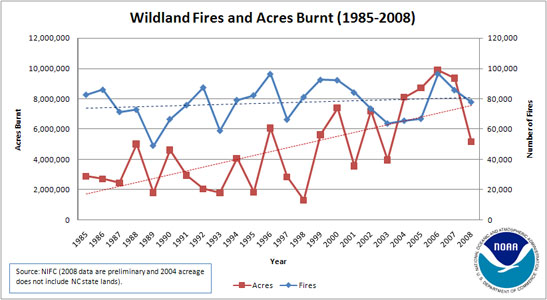 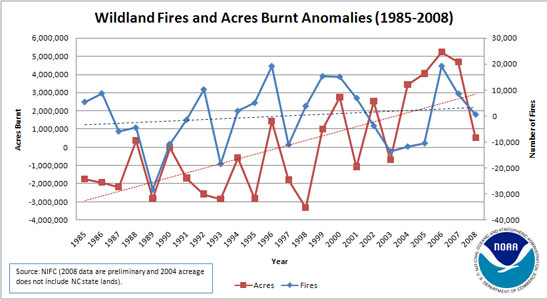 (Dashed lines on the above charts are OLS linear trends fit to the data.)