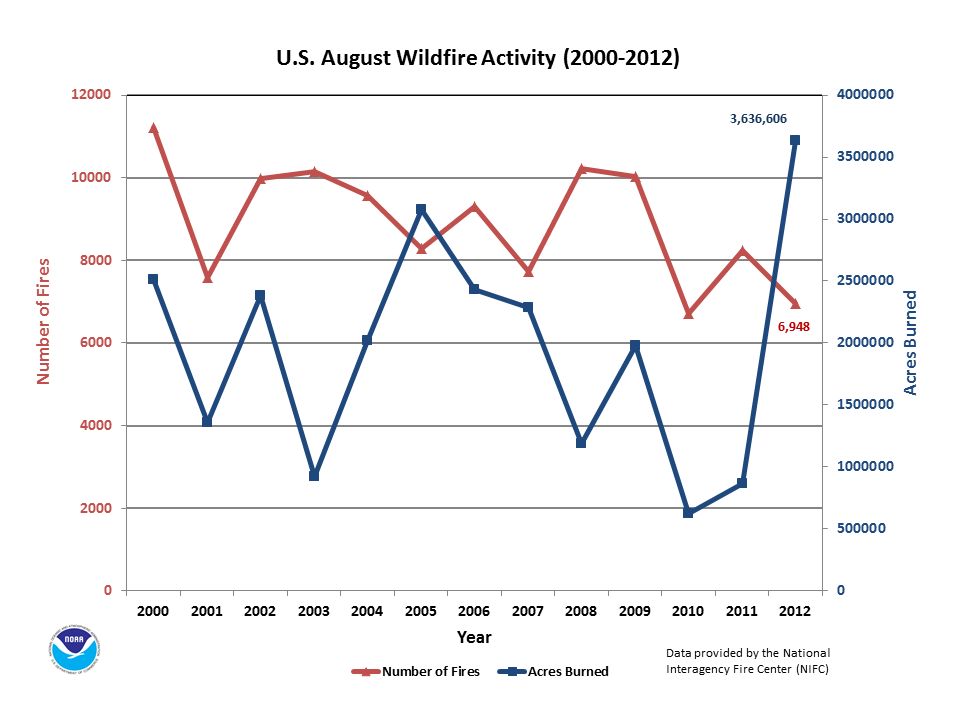 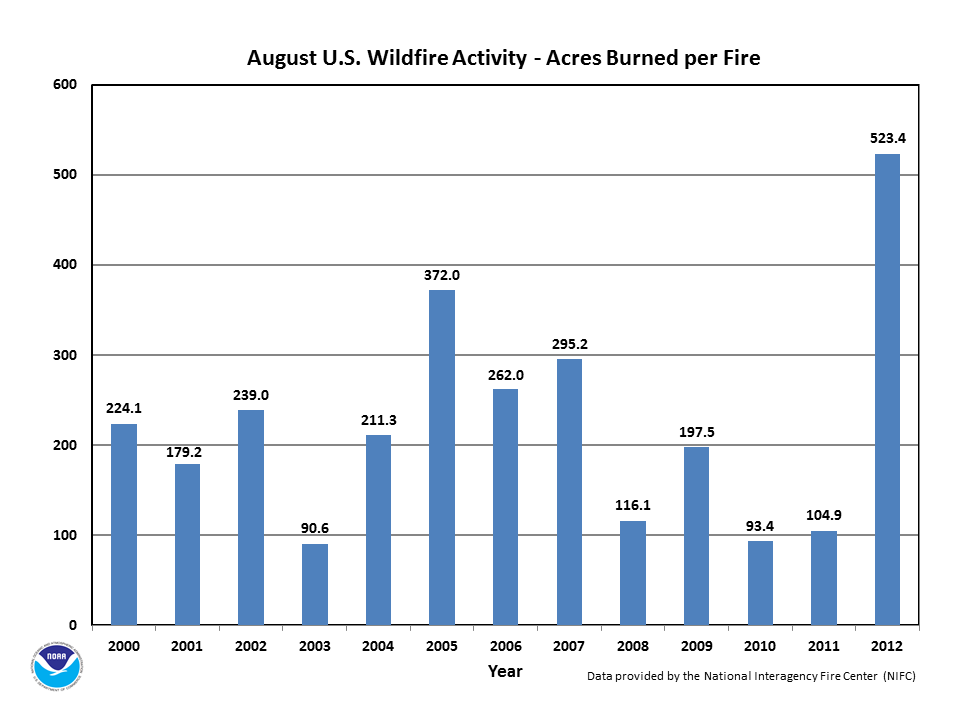 During August, numerous large fires occurred across the western and central U.S. regions as dryness, low humidity, and windy conditions persisted. The monthly average fire size reached 523.4 acres per fire—which was the highest for any August in the 2000-2012 record. Likewise, the year-to-date average fire size of 173.5 acres was the most since 2000. The monthly total of 3.64 million acres burned by wildfires ranked as the highest for any August since 2000. Moreover, nearly half the entire acreage burned since January occurred within the single month of August and brought the year-to-date total acreage burned to the most on record—exceeding 7.72 million acres. The monthly total number of 6,948 fires was the 2nd least for August in the thirteen-year record. Similarly, both the total number of fires for the season (22,232) and year-to-date (44,524) ranked as 2nd least since 2000—denoting a tendency for fires, although fewer in number, to be larger in size.

The above-normal fire weather potential of the Intermountain West was realized as the hot, dry conditions persisted and thunderstorms triggered wildfires across dried out higher-elevation fuels. Nevada experienced its warmest August on record (1895-2012) while Colorado and Wyoming experienced their warmest summers since 1895. Meanwhile, monthly temperatures were below normal at locations within the northern Great Plains states where conditions remained dry. In central Nebraska, exceptional drought conditions expanded westward to reach northeastern Colorado. Wildfires flared within Nebraska and Wyoming during late August, where both states observed their driest summers since 1895. Late in the month, Hurricane Isaac's slow track over the south central region of the U.S. drenched areas of Mississippi, Louisiana, Arkansas, and parts of Texas, Tennessee, and Oklahoma. As a result, Mississippi and Louisiana each sustained their second wettest August on record (1895-2012). However, the copious rains fell mostly outside of the predominant wildfire-prone areas. Please see the U.S. temperature and precipitation report for additional information.

Drought area increased across most of the central and western states with extreme to exceptional drought over much of the central Rockies, the Plains, and through the Mississippi and Ohio valleys. Between August 7th and August 14th, the Exceptional Drought (D4) conditions in the U.S. Southern Plains expanded notably. Drought areas in Colorado, Kansas, and Oklahoma merged with those in Arkansas to span across central Kansas through Missouri. According to the August 28, 2012, U.S. Drought Monitor nearly 63 percent of the contiguous U.S. as affected by moderate to exceptional drought.


Please note, this is a list of select fires that occurred during August. Additional fire information can be found through Inciweb. 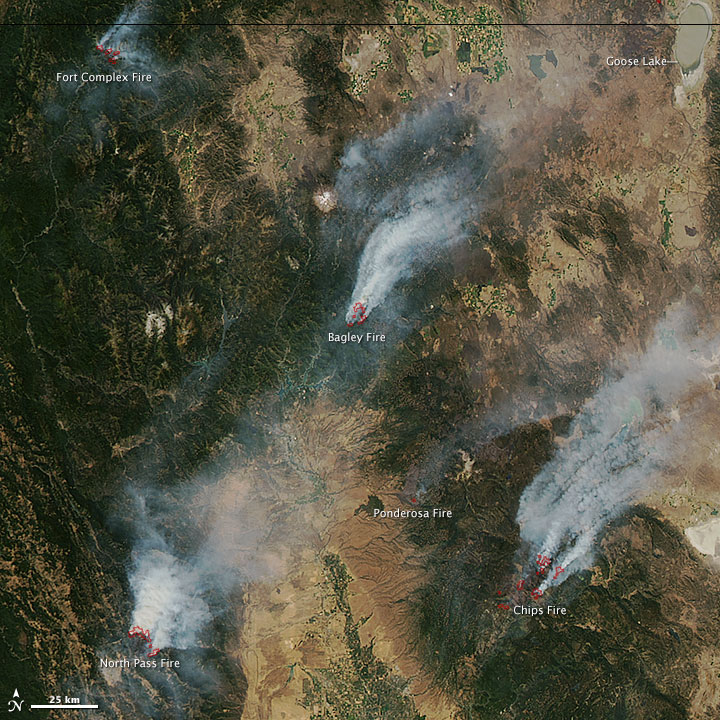 Several wildfires remained active in northern California, following a rash of blazes across the entire state at mid-month.

The Chips wildfire which burned the entire month, destroyed over 75,000 acres, and exceeded suppression costs of $44.2 million U.S. dollars. The blaze ignited on July 29th and contained as of August 31st, was confined to a rugged, remote area of Plumas National Forest, and nine structures were lost.

The Ponderosa wildfire—the next costliest incident to contain during August at $27.6 million U.S. dollars—scorched nearly 27,700 acres of rugged, densely forested land since being sparked by lightning on August 18th. At least 52 homes and more than 80 other structures were destroyed in the blaze while seven persons were injured.

The North Pass wildfire, also ignited by lightning on August 18th, remained active throughout the month with over 70 percent containment achieved as of September 7th. Suppression costs have reached $16.7 million U.S. dollars and nearly 42,000 acres have burned. Seven residences and nine outbuildings have been destroyed, and three times as many homes and buildings remained threatened. Nine people were injured and evacuations were in effect for parts of Mendocino County as the fire continued spreading northward at month's end.

The Forts Complex consisted of three fires—the Hello Fire, Lick Fire, and Goff Fire—sparked by lightning on August 5th. Firefighters exercised special care to protect the bio-diverse Red Butte wilderness as they battled flames on its steep terrain. The fires tended to leave the larger trees intact, while predominantly burning the underbrush across more than 22,300 acres. Only 30 percent contained at month's end, the fires resulted in evacuation of 300 residents, and 80 homes were under threat while eight injuries had been reported.

Ravaging more than 315,500 acres altogether, the Rush Fire became one of the largest western fires during the month. Having been ignited by lightning on August 12th, the flames—being fanned by gusty winds in the following days—rapidly spread through dry vegetation. The fire which burned almost 272,000 acres in northeastern California constituted the second largest in the state since 1932. The fire also burned over 43,600 acres in Nevada where it posed a threat to a major natural gas line and power transmission lines at mid-month. The fire which was contained on August 30th, adversely impacted the natural habitats for federally-protected wild horses, burros, and grouse of the area. 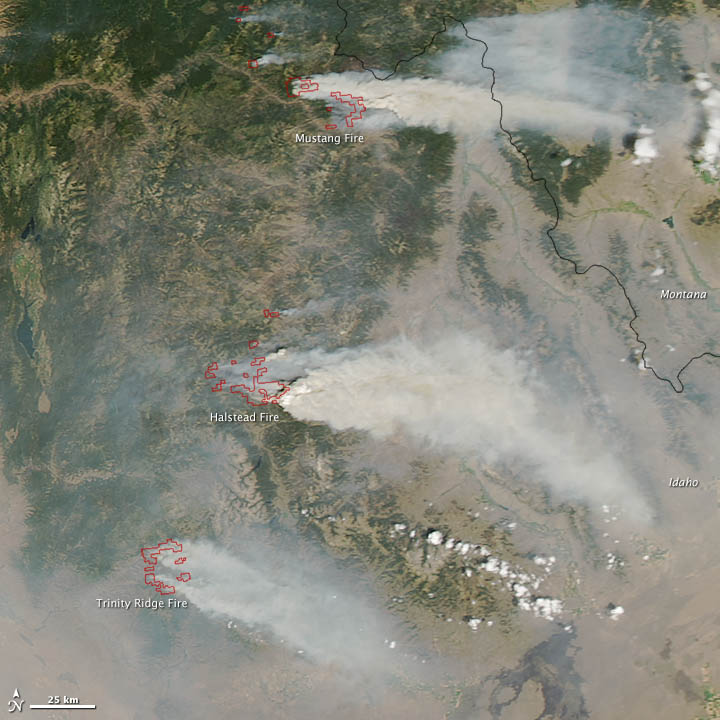 Multiple fires raged in Idaho during August. Heavy smoke from the various fires resulted in air quality (AQ) advisories being issued for area residents, reaching to the AQ index's second-highest level (purple) in terms of the health effects severity by the end of the month. The Halstead Fire which was ignited by lightning on July 27th, charred over 140,000 acres while sweeping quickly through beetle-killed lodgepole pines in the Salmon-Challis National Forest and remained active in September.

The Mustang Complex (consisting of five fires) was ignited during thunderstorms and lightning in late July and remained active throughout August, and eventually advanced into Montana's Bitterroot National Forest. As of September 7th, the blazes had engulfed nearly 253,000 acres of dead lodgepole pines as well as Ponderosa pines with grass and brush understory at lower elevations.

The Trinity Ridge Fire that began August 3rd, scorched around 146,000 acres through August and remained uncontained. The flames of this crown fire engulfed timber stands of pines and fir. At least eight structures were destroyed and residents of Featherville were evacuated during August. 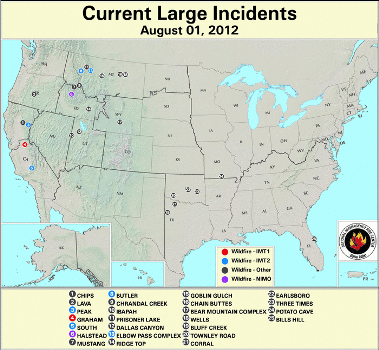 Light rainfalls over the southwestern U.S. during the first week of August impeded the wildfire development conditions somewhat. Twenty-five large wildfires were active on August 1st, mostly concentrated in two areas—northern Idaho and central Montana, and northern Texas and central Oklahoma. The fires coincided closely with areas of dry fuels having dangerously low 10-hour and 100-hour fuel moisture values (below 10 percent in the West and Central states). Fires occuring in Arkansas and Louisiana aligned with extreme fire potential indicated by the Keetch-Byram Drought Index (KBDI) values over 700. Much of the western U.S. had 1000-hr fuel moistures below 15 percent during the entire month. Wildfires in Oklahoma rendered tragic consequences with over 120 structures lost statewide due to dozens of grassland fires early in the month, including five major ones. Close to 25 homes and a day care center were destroyed in the town of Luther. The fire near the town of Mannford, which engulfed nearly 64,000 acres and consumed close to 40 structures,was deemed the largest in recent state history, according to media reports. Near the city of Norman, where one person perished in the fire, at least 17 families received refuge in shelters established by the American Red Cross. At least two wildfires in northern Texas were fueled by drought-stressed brush, mesquite, and juniper and forced evacuation of at least 40 homes. Windy conditions spread the Rhodes Ranch II blaze which ignited August 7th and consumed close to 2,000 acres before being contained on August 16th. The Dark Valley fire began August 9th, and scorched over 1,700 acres prior to containment on August 17th. 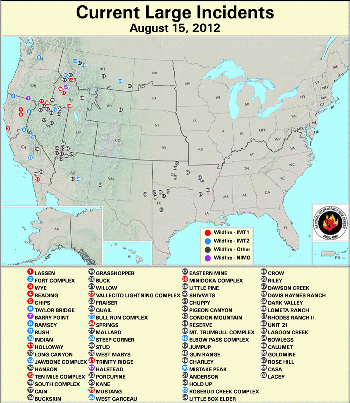 The number of wildfires swelled to at least 69 incidents as of August 15th. As the quantity of fires increased within the existing locations, pockets of new fires erupted along Nevada's borders—Oregon in its north, Arizona and Utah in its south—as well as across California at mid-month. Precipitation over the central U.S. slightly improved the respective 10-hour and 100-hour fuel moistures of those areas. The 100-hour fuel moistures worsened over the Four-Corners region, particularly in north-central Arizona. Lightning sparked the Charley Fire in central Arizona which burned 2,300 acres of short grass over extremely steep terrain from August 12th through August 20th. Precipitation of 0.39 inche (9.9 mm) falling on August 19th facilitated the wildfire's containment. Another lightning-sparked wildfire burned about 360 acres near the Grand Canyon National Park in northwestern Arizona from August 13th to August 22nd. Fuels included short grass and brush. The Quail Fire endangered parts of the Joshua Tree National Park in southern California between August 12th and August 15th. The fuels of piñon, juniper, scrub oak, blackbrush, cactus, and desert grasses constitute the habitat for the desert tortoise, a threatened species. Nearly 280 acres of the Park's designated wildness area were burned in the lightning-sparked blaze. 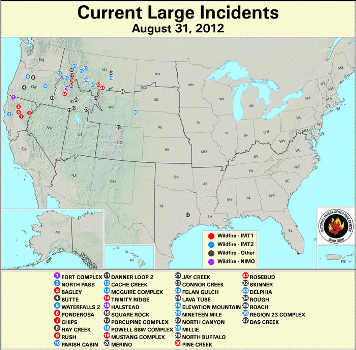 By August 31st, large fire activity was primarily constrained to the northwestern U.S. with the exception of one wildfire in eastern Texas, and the areas coincided with moderate moisture deficits as indicated by the KBDI values from 400-700. The Delphia wildfire blazed more than 400,600 acres in central Montana between August 24th and August 31st. Gusty winds drove the flames through fuels of timber, sage, and grass and suppression costs topped $2.0 million U.S. dollars. Although summer monsoon rains brought respite to dry fuels in the Desert Southwest as evidenced in the 10-hour fuel moisture, the dryness for the High Plains intensified. For New Mexico, the August rainfall signified its driest 18-month consecutive period on record. The influx of tropical rainfall associated with Hurricane Isaac significantly improved the 10-hour and 100-hour fuel moistures in the Mid-South, notably Arkansas and Missouri.

Alaska's 1000-hour fuel moisture indicators reflected continuous improvement throughout the month. Both the 10-hour and 100-hour fuel moistures initially worsened, with dryness expanding over most of the state at mid-month. Drenching rains from multiple storms the latter half of August yielded widespread improvement for all Alaskan dry fuels by the month's end.