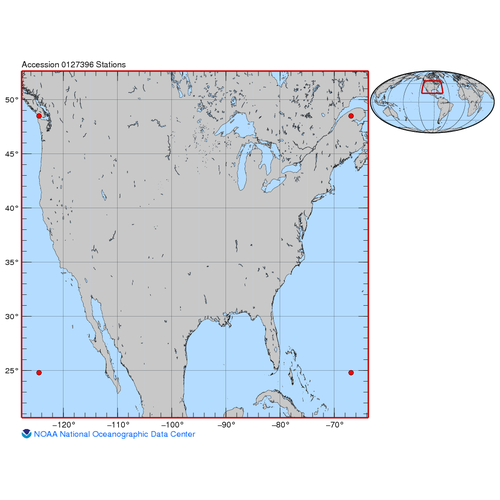 Preview graphic
These unprojected (geographic coordinates) 3-Zone Average Annual Salinity Digital Geographies are based on analysis of long-term salinity data for 147 estuaries of the contiguous United States. Each estuary is subdivided into three zones between the head(s) of tide, and the seaward boundaries based on annual-averaged and depth-averaged salinities. The salinities used to define the three zones are: (1) Tidal Fresh Zone (0 to 0.5 parts per thousand); (2) Mixing Zone (0.5 to 25 parts per thousand); (3) Seawater Zone (25 parts per thousand or greater).

This 3-zone scheme is considered static rather than dynamic, because it does not take into account the seasonal variations in salinity patterns and stratification that occur in most estuaries. Nonetheless, it provides a simple and readily understandable way to depict the long-term salinity characteristics of U.S. estuarine waters. Note that not all estuaries contain all three zones - for example, Baffin Bay, Texas, receives relatively little annual freshwater inflow, and is considered to be entirely Seawater Zone. This 3-zone scheme was originally presented in the National Estuarine Inventory (NEI) Data Atlas, Vol. I (NOAA/NOS 1985) for 92 estuaries of the contiguous United States. In the 1990s, digital geographies were refined and many estuaries were added to become a key layer within the Coastal Assessment Framework (NOAA 2007).