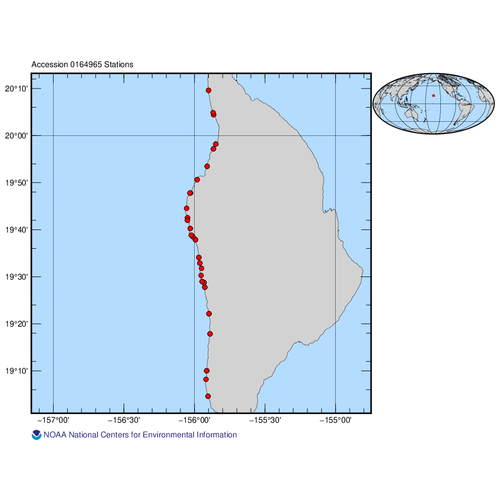 Preview graphic
Fish & Invertebrate surveys:
At each permanent monitoring site (26 total), fishes and urchins are recorded on 4 fixed 25m transects. Each transect is surveyed by a team of two divers who collectively record fishes within, entering or passing across the belt transect dimensions of 25m*4m. Fishes are counted by means of two passes – mid-water and roving species are recorded on the outward swim; urchins and all other fish species are recorded in the return swim, during which divers swim more slowly carefully looking for smaller site-attached and semi cryptic organisms that make up the bulk of abundance at most sites. Divers swim in parallel, each recording fishes and urchins within one half of the transect; an area of 25m*2m. Collectively the transect area is 100 m2. Divers take care not to count fishes moving across the transect line from the other diver’s portion of the transect.

Benthic surveys:
Benthic cover is assessed at all monitoring sites, typically during the spring every three years (or annually following an anticipated substantial change in benthic cover). Benthic images (0.30 m2) are taken at each meter along four 25 m transects at each site. Benthic taxa located below 20 stratified random points in each image are identified to the lowest possible taxonomic level using Coral Point Count with Excel extensions (CPCe) software during the years 2003-2017, and using CoralNet in 2020. Relative change in benthic cover by category is calculated for each transect, then averaged by site.

Coral bleaching/ health surveys:
In response to extensive coral bleaching in West Hawaii during the spring/summer of 2015, coral bleaching/ health surveys were conducted at 8 permanent monitoring sites from 9 October to 13 November 2015 using methods described in Couch et al. 2014. Three 10 m2 belt transects were surveyed per site, and all coral colonies (≥ 5cm diameter) within each belt were scored for bleaching/health condition and severity. During surveys, a progression of algal turf presence on bleached coral colonies was also scored (TF). The severity of each condition and algal turf presence was scored based on the percent of the colony affected. Additional coral bleaching/ health surveys will be conducted as needed.
Dataset Citation
Dataset Identifiers
ISO 19115-2 Metadata
gov.noaa.nodc:0164965
Full Text · XML
Last Modified: 2022-06-01T18:10:08Z
For questions about the information on this page, please email: ncei.info@noaa.gov