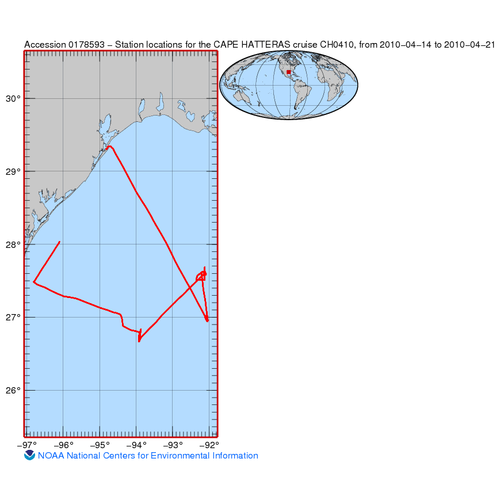 Preview graphic
NCEI Accession 0178593 includes navigational data collected aboard the CAPE HATTERAS during cruise CH0410 in the Gulf of Mexico from 2010-04-14 to 2010-04-21. These data include LATITUDE, LONGITUDE, course over ground and speed over ground. The instruments used to collect these data include GPS. These data were collected by Terrence Quinn of University of Texas; University of Texas - Austin; Institute for Geophysics, and by Duke University/University of North Carolina Oceanographic Consortium as part of Multi-decadal to Centennial Scale Variability in the Surface Ocean of the Northern Gulf of Mexico over the Late Holocene. The Lamont-Doherty Earth Observatory (LDEO) submitted these data to NCEI as part of the Rolling Deck to Repository (R2R) program.

A suite of navigation products produced by the Rolling Deck to Repository program is included in this accession, which include one high resolution, one 1 minute resolution, and one low resolution coordinate file.
Dataset Citation
Dataset Identifiers
ISO 19115-2 Metadata
gov.noaa.nodc:0178593
Full Text · XML
Last Modified: 2020-09-01T11:49:20Z
For questions about the information on this page, please email: ncei.info@noaa.gov