Ocean currents from lowered acoustic Doppler current profilers (LADCP) from the Climate Variability (CLIVAR) project from 2003 to 2014 assembled at the University of Hawaii and Lamont-Doherty Earth Observatory, Columbia University 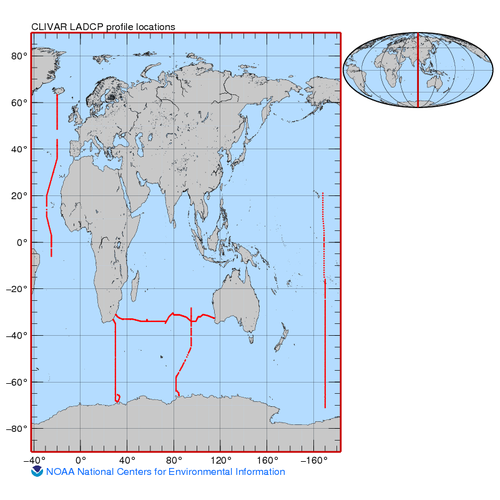 ADCPs use the Doppler shift of an outgoing frequency along a beam to return measured velocity along that beam. ADCPs typically have 4 beams, allowing measurement of velocity in 3 dimensions, in bins of varying distance from the transducer head. In this application, the ADCP is mounted on a CTD rosette frame and lowered along with the rest of the package, hence called Lowered ADCP ("LADCP"). LADCP requires less ship time in estimating deep currents as compared to historic measuring systems such as Pegasus systems. The goal is to determine water velocities to the full depth of the ocean for each LADCP deployment. Ocean velocities are very small (few cm/s), especially in the deep water. The package is typically lowered or raised at 1m/s for much of the water column, creating a challenging data processing situation. To reduce the LADCP measurements, one must utilize other data streams such as CTD at both standard levels and at the highest frequency of recording, GPS positions, ship navigation, ocean depth, and shipboard ADCP.

Lowered ADCP data requires ancillary information to improve the processed data product. Over generations, the processing has improved and these ancillary components are systematically collected along with the LADCP data. In older datasets, they may be missing entirely. The directory structure and naming convention for the submitted LADCP datasets attempt to rationalize 20 years of data acquisition and processing by a collection of scientists who were inventing the field of LADCP acquisition and processing, so there is some variety in the organization and naming of the original datasets. Evolution of the instrumentation and processing techniques have continued.

For the NCEI archive, three levels are defined: 1) Level-0, raw LADCP and ancillary data streams of the down- and up-cast, 2) Level-1, processed LADCP and ancillary data streams for the down-, up-, and averaged cast, and 3) Level-2 science-ready subset of select parameters. Presently only Levels 0 and 1 will be archived since work continues for defining error associated with Level 3. Note, Level 1 data are "as processed" based on the processing code pertinent at that time. There is one processed file per station cast. The ancillary streams of Level-1 are the basic oceanographic variables of interest, and may also include a variety of additional fields associated with the processing.
Dataset Citation
Dataset Identifiers
ISO 19115-2 Metadata
gov.noaa.nodc:CLIVAR-LADCP
Full Text · XML
Last Modified: 2020-09-16T21:21:07Z
For questions about the information on this page, please email: ncei.info@noaa.gov