NOAA and its partners have released the latest Regional Climate Impacts and Outlooks, which recap spring conditions and provide insight into what might be expected this summer.

Temperatures were above average across much of the West and from the northern and central Plains to the Northeast and along much of the East Coast. Maine ranked seventh warmest for spring. No state across the Lower 48 ranked below average for the season. The Alaska spring temperature was 24.4°F, 0.5°F above the long-term average, ranking in the middle third of the record for the state. This was the coolest spring across Alaska since 2013. Temperatures were above average across the Aleutians and portions of northern Alaska and below average across parts of eastern-interior Alaska. 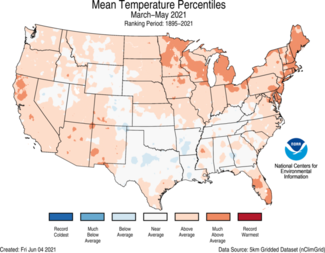 The July-August-September (JAS) 2021 temperature outlook favors above-normal temperatures for Alaska, the western half of the contiguous United States (CONUS), the eastern quarter of the CONUS, and the Northern Plains, with the highest probabilities (greater than 60 percent) forecast across the Northeast.

Spring precipitation was above average from the central High Plains to the Mississippi River and south to the Gulf of Mexico. Louisiana ranked fourth wettest for the season. Precipitation during March–May was below average across much of the West, Great Lakes, and East Coast. Idaho, Oregon, and the state of Washington ranked second driest for the spring season while California ranked fourth driest. 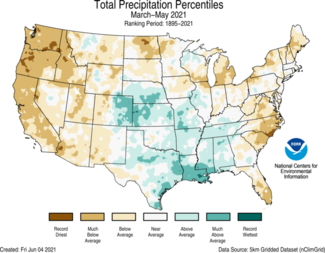 Get more details for your region in the June 2021 climate impacts and outlooks summaries: