NOAA and its partners have released the latest Regional Climate Impacts and Outlooks, which recap spring conditions and provide insight into what might be expected this summer.

The spring (March–May) average contiguous U.S. temperature was 52.2°F, 1.3°F above average, ranking in the warmest third of the record. Temperatures were above average from California to the Deep South and, in general, from the Mississippi River to the East Coast. Temperatures were below average from the Pacific Northwest to the Upper Midwest. Rhode Island ranked fourth warmest while nine additional states across the Northeast, Southeast, and Southern Tier ranked among their warmest 10 spring seasons on record. The Alaska spring temperature was 23.7°F, 3.3°F above the long-term average, ranking in the warmest third of the record for the state. Temperatures were above average across most of the state with the eastern Interior regions and parts of the Panhandle region near average for the season. 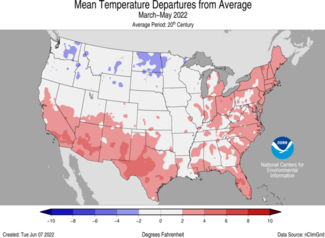 The spring precipitation total was 8.07 inches, 0.13 inch above average, ranking in the middle one-third of the March–May record. Precipitation was above average across parts of the Northwest, northern Plains, Great Lakes, central Plains, along portions of the central and eastern Gulf Coast, and across parts of the Northeast for the season. Precipitation during March–May was below average from California to the High Plains and western Gulf Coast. North Dakota ranked fourth wettest while New Mexico ranked sixth driest for the spring season. 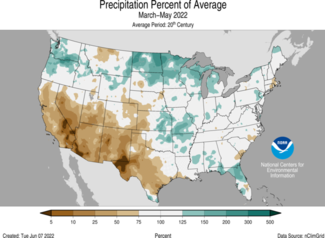 Get more details for your region in the June 2022 climate impacts and outlooks summaries: