Halloween marks a tricky time of year for meteorologists and climatologists as autumn is in full swing across the Northern Hemisphere. In the United States, the spooky celebration, well known for its weather variations from year to year, sees normal high temperatures ranging from the 40s to the 80s and normal lows ranging from the teens to the 70s across the contiguous states alone.

In fact, many U.S. locations experience drastic temperature swings throughout the month of October. In some years, summer’s warmth can hang on through the month while in others snow and freezing temperatures may make an early appearance. But, overall, the lower 48 states usually see an average temperature of around 54°F for the month. 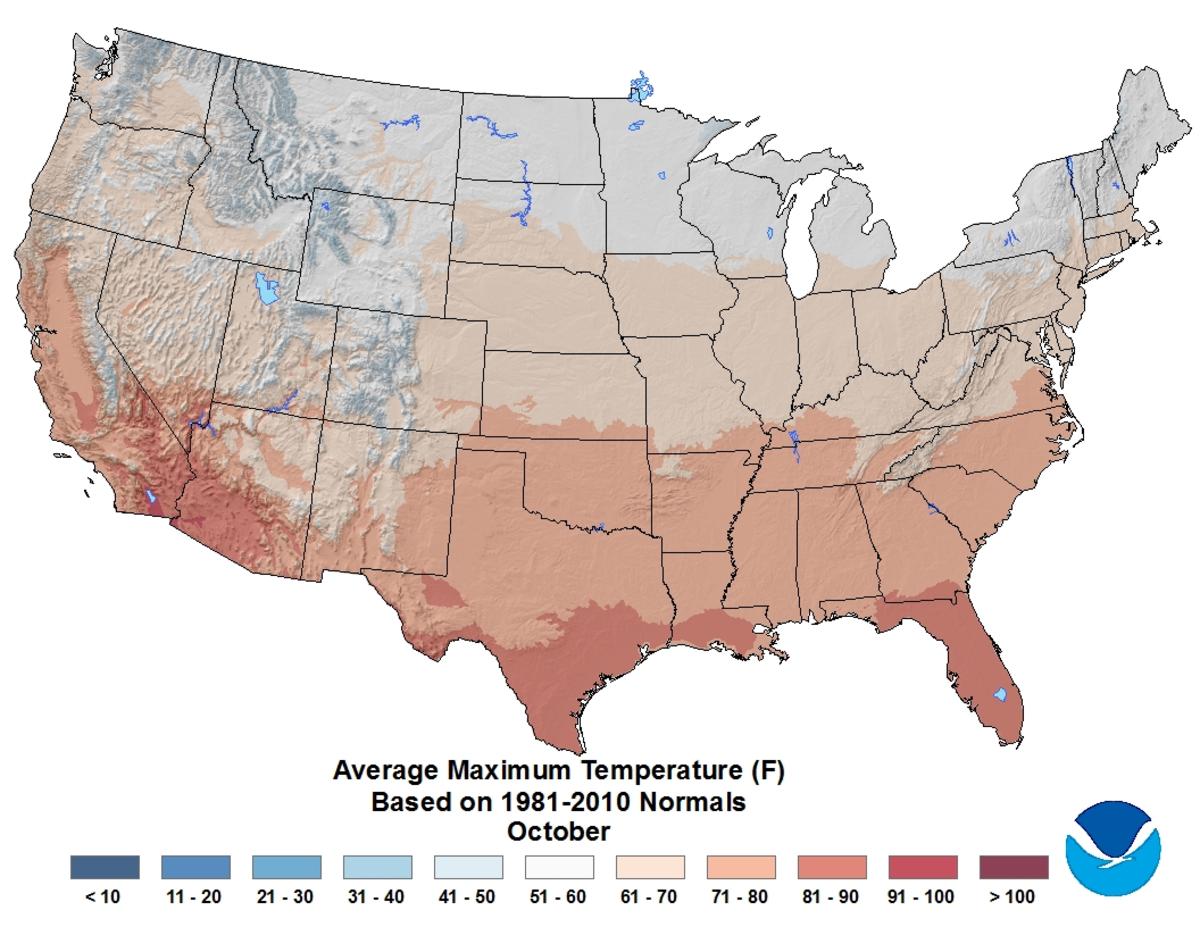 October is also the first month of the cold season that typically brings snow to parts of the nation. The Rockies and parts of the Northern and Central Plains into the Upper Midwest typically observe their first snowfall during the month. Higher elevations in the East have also observed snow in October. Generally, the contiguous United States sees an average of about 2 inches of liquid precipitation during October. 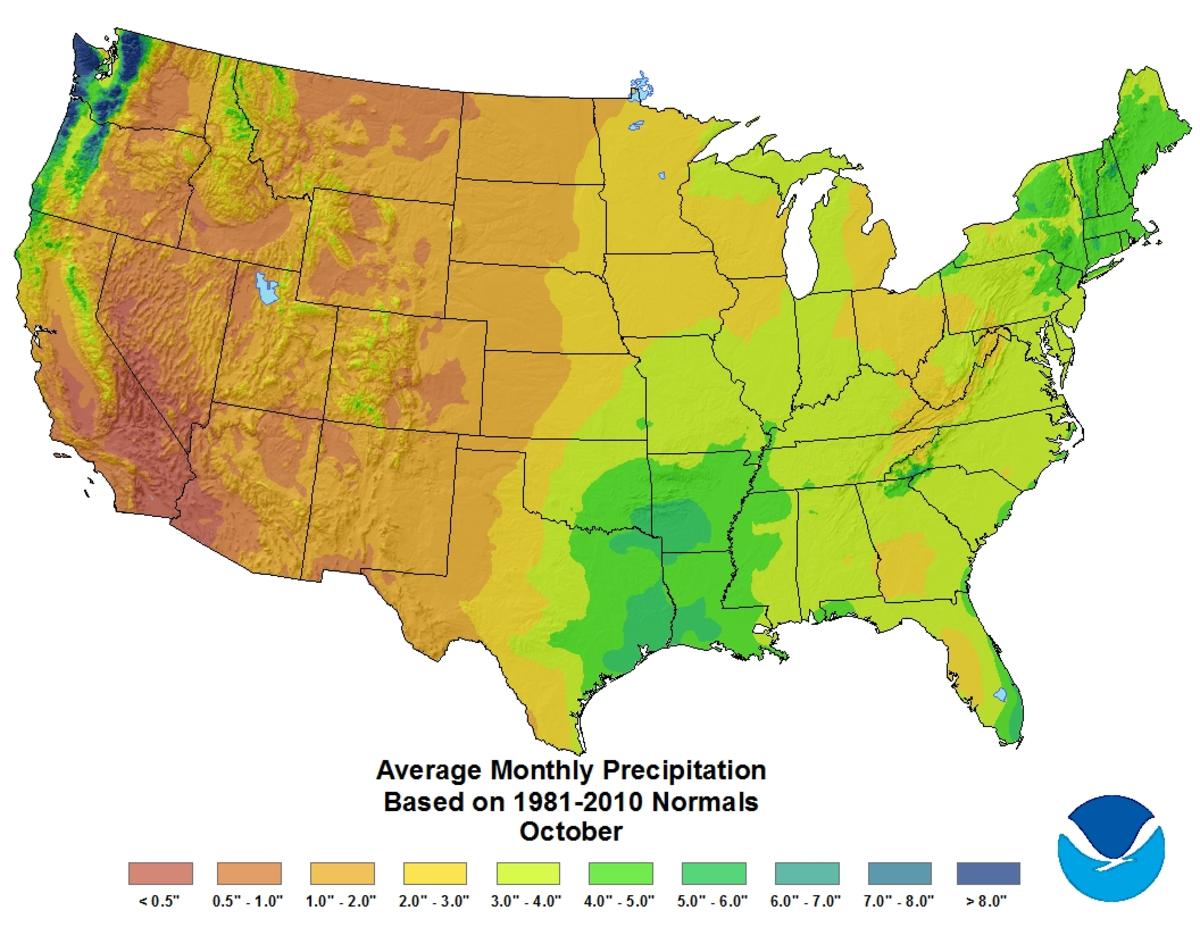 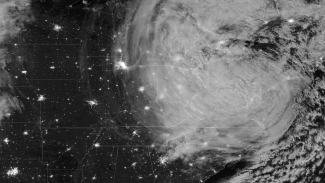 Even though the North Atlantic Basin hurricane season is typically winding down in October, several deadly and very costly storms have struck the United States during the month. For example, Hurricane Michael made landfall near Mexico Beach, Florida, on October 10, 2018, with sustained winds of 155 mph and a central pressure of 920 mb. At landfall, Michael was a Category 5 storm and also the strongest land falling mainland U.S. hurricane in terms of pressure since Camille in 1969. Michael was the first Category 5 hurricane to strike the contiguous U.S. since Andrew in 1992 and was also the strongest hurricane to impact the mainland United States during the month of October. 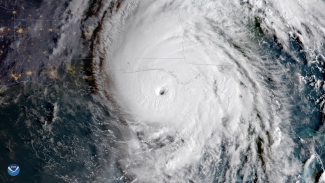 Hurricane Michael as it strengthened to a Category 4 hurricane on October 10, 2018, before making landfall in the Florida Panhandle. Courtesy of NOAA Environmental Visualization Laboratory.

Ranking as the fourth costliest hurricane to hit the United States since 1980, Superstorm Sandy made landfall near Atlantic City, New Jersey, on October 29, 2012. Sandy’s impact on major population centers caused widespread interruptions to critical water and electrical services. The storm caused $74.8 billion in damages and 159 fatalities.

In 2005, Hurricane Wilma made landfall in southwest Florida as a Category 3 storm, causing $25.8 billion in damages and 35 fatalities. Prior to landfall, Wilma went down in history with the lowest central pressure ever recorded in the Atlantic basin (882 mb) while it was a Category 5 storm. Hurricane Opal in 1995 was also one of the worst October hurricanes to hit the United States, causing $8.1 billion in damages and 27 fatalities.

Tornado activity typically drops off rapidly during October. On average, the United States sees about 61 tornadoes during the month—compared to an average of 276 in May, which is historically the country’s most active month. Despite the low tornado average, large and damaging tornado outbreaks have occurred during October, mostly across the Southern Plains and Southeast. The deadliest October tornado was an F4 spawned by Hurricane Hilda on October 3, 1964, which killed 22 people in Larose, Louisiana.

In such a geographically and climatologically diverse country, average conditions can vary from day to day and from place to place across the United States. From Death Valley’s heat to frigid temperatures in Devils Lake, the table below shows the normal minimum, average, and maximum temperatures on October 31 for 10 locations with Halloween-themed names, according to our daily 1981–2010 Climate Normals data.

While our Climate Normals provide average temperatures throughout the United States, this Halloween’s actual conditions may vary widely based on weather and climate patterns. For prediction of your actual local daily temperature, check out your local forecast office on Weather.gov.

While our Climate Normals provide average temperatures throughout the United States, this Halloween’s actual conditions may vary widely based on weather and climate patterns. For prediction of your actual local daily temperature, check out your local forecast office on Weather.gov.

For an in-depth analysis of recent climate conditions, check out our U.S. Climate Report.

Updated with the latest statistics and information