Drought, floods, freezing temperatures, severe storms, tropical cyclones, wildfires, winter storms—every year since 1980, these weather and climate disasters have claimed countless lives and caused billions of dollars in damages in the United States. And, it is NCEI's job to chronicle these disasters and document their impacts to the Nation.

1. Why study the cost of weather and climate disasters?

NCEI is the Nation's scorekeeper in terms of addressing severe weather and climate events in their historical perspective. As part of our responsibilities of monitoring and assessing the climate, we track and evaluate climate events in the United States that have great economic and societal impacts.

NCEI’s U.S. billion-dollar disaster analysis seeks to bring the best public and private disaster loss data together in a systematic approach. To that end, we maintain a consistent record of weather and climate disasters with costs equaling or exceeding $1 billion in damages (adjusting for inflation) using high-quality data sources and peer-reviewed methods. This enables us to provide historical context to these events when they occur while quantifying their total, direct costs.

Our data and information are used to examine past events and gauge future risk. The National Hurricane Center, the reinsurance industry, and catastrophe modelers incorporate such information into their assessments, to contextualize risk and loss potential for communities across the Nation.

NCEI currently monitors and assesses the costs and impacts of:

2. What are the most costly weather and climate disasters?

During 2021, there were 20 separate billion-dollar weather and climate disaster events across the United States. The total cost from these events of 2021 was $145.0 billion and is the third most costly year on record, behind 2017 and 2005. The total costs for the last five years ($764.9 billion) is more than one-third of the disaster cost total of the last 42-years (1980-2021), which exceeds $2.195 trillion (inflation-adjusted to 2021 dollars). This reflects a 5-year cost average of nearly $152.9 billion/year—a new record—as shown in the chart below by the black line.

The average cost per event by disaster types are the following:

3. Has every state experienced a billion-dollar disaster?

While each region of the United States faces a unique combination of weather and climate events, every state in the country has been impacted by at least one billion-dollar disaster since 1980. Since 1980, there have been more than 100 of these events that have affected at least some part of Texas, while only one event has impacted Hawaii (Hurricane Iniki in 1992). 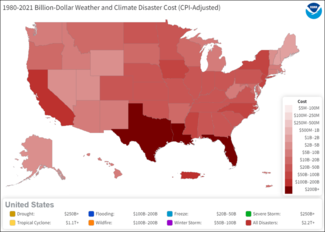 Wildfires are most common west of the Plains states and in several Southeastern states. However, the most intense and destructive wildfires occur in California–most notably after the year 2000. Inland flood events—not caused by tropical cyclones—often occur in states near large rivers or the Gulf of Mexico, which is a warm source of moisture to fuel rainstorms. Drought impacts are mostly focused in the Southern and Plains states where crop and livestock assets are densely populated. Severe local storm events are common across the Plains, Southeast, and Ohio River Valley states. And, winter storm impacts are concentrated in the Northeastern states while tropical cyclone impacts range from Texas to New England but also impact many inland states.

In total, the Central, South, and Southeast regions typically experience a higher frequency of billion-dollar disasters than other regions.

To visualize the frequency and cost of billion-dollar disasters, check out our mapping tool.

4. How do you calculate a disaster’s price tag?

In calculating the cost assessments, we receive input from a variety of public and private data sources including:

Each of these data sources provides key pieces of information that capture the total, direct costs—both insured and uninsured—of weather and climate events. These costs include:

One of the key transformations is scaling up insured loss data to account for uninsured and underinsured losses, which differs by peril, geography, and asset class.

However, these loss assessments do not take into account losses to natural capital or assets, healthcare related losses, or values associated with loss of life. Therefore, our estimates should be considered conservative with respect to what is truly lost, but cannot be completely measured.

5. How long does it take to calculate the price tag?

The scale and complexity of a disaster greatly influence the length of time to assess the losses. Hurricanes are particularly challenging because it takes time to better understand the wind versus water damage losses across a variety of assets (like homes, businesses, boats and vehicles, infrastructure, and agriculture) and how much of this damage is insured versus uninsured. In contrast, with more localized events—like a Colorado hail storm—where property is highly insured, we can more quickly capture the losses.

The increases in population and material wealth over the last several decades are an important factor for higher damage potential. These trends are further complicated by the fact that many population centers and infrastructure exist in vulnerable areas like coasts, river floodplains and the wildland urban interface, while building codes are often insufficient in reducing damage from extreme events. Climate change is also playing a role in the increasing frequency of some types of extreme weather that lead to billion-dollar disasters.

7. Has the U.S. experienced more flooding events in recent years?

In 2019, the U.S. was impacted by several large-scale, inland flood events across many Midwestern and Southern Plains states. The damage costs were at least $20.0 billion, which makes it one of the most costly U.S. floods on record. In 2021, Louisiana and California also experienced flood events, in addition to many other non-billion dollar floods like in Waverly, Tennessee that were locally catastrophic.

In 2017, Hurricane Harvey caused unprecedented amounts of rainfall (up to 60 inches) over Houston—one of America's largest cities. More than 30 inches of rainfall fell on 6.9 million people, while 1.25 million experienced over 45 inches and 11,000 had over 50 inches, based on 7-day rainfall totals ending August 31. The year 2021 was the fifth consecutive year (2017-2021) that the U.S. was impacted by a slow moving tropical cyclone that produced extreme rainfall and damaging floods—Harvey, Florence, Imelda, Sally and Ida.

This perhaps should be expected, as heavy rainfall events and their ensuing flood risks are increasing because warmer temperatures are "loading" the atmosphere with more water vapor. Over time, this increases the potential for extreme rainfall events. And, where we build and how we build determines our resilience to the increasing risk of flood events.

Updated with most recent information and costs.

According to the March 8, 2022, U.S. Drought Monitor, moderate to exceptional drought covers 51.2% of the United States