Between October 2011 and September 2015, California saw its driest four-year period in the instrumental record, which dates back to 1895. Parts of the state lost more than two full years of precipitation during the prolonged, severe dry spell. But, a new study by NOAA NCEI scientists suggests that from the longer-term view of paleoclimate records, the southern Central Valley and South Coast parts of the state saw their worst dry spell in nearly 450 years.

Published in the Journal of Climate, this study also looked at how long it would take the state to recover from its current precipitation deficits. And, the scientists found that California’s hardest hit areas would likely need several decades for their long-term average precipitation to recover back to normal levels, starting from the 2012–2015 deficits. “The odds of the state completely recovering from its extreme dryness within two years are estimated at less than 1 percent,” said Dr. Eugene R. Wahl, NCEI paleoclimatologist and lead author of the study. “But, the state is moving a good way towards recovery if very wet conditions continue into spring.”

The extreme El Niño conditions between 2015 and 2016 helped jumpstart recovery in the northern half of the state. And, the scientists found that when very strong or extreme El Niño events followed a similar deep dryness, California’s full recovery time was nearly cut in half. The high amounts of precipitation California has received during the current wet season have already set the state up for a faster recovery time than 80 percent of similar events. If it continues to be an extremely wet year for the state, like fall 1982 through summer 1983, California would be looking at an even shorter recovery time.

But, different parts of the state have felt the impacts of the dryness differently, and they will likely recover at different rates. To get a better view of these regional differences, the scientists also looked at each of the seven standard climate divisions in California and their histories of extreme dry spells.

In most of these regions, the scientists found that similar very dry events had occurred since the late 16th century. However, two of the state’s hardest hit regions—the San Joaquin Drainage and the South Coast Drainage—likely hadn’t seen a four-year period as dry since at least before 1571. “These two regions include the agriculturally important Central Valley and the densely populated greater Los Angeles and San Diego metropolitan areas,” said Dr. Wahl, “So, the social and economic impacts are of particular importance there.” 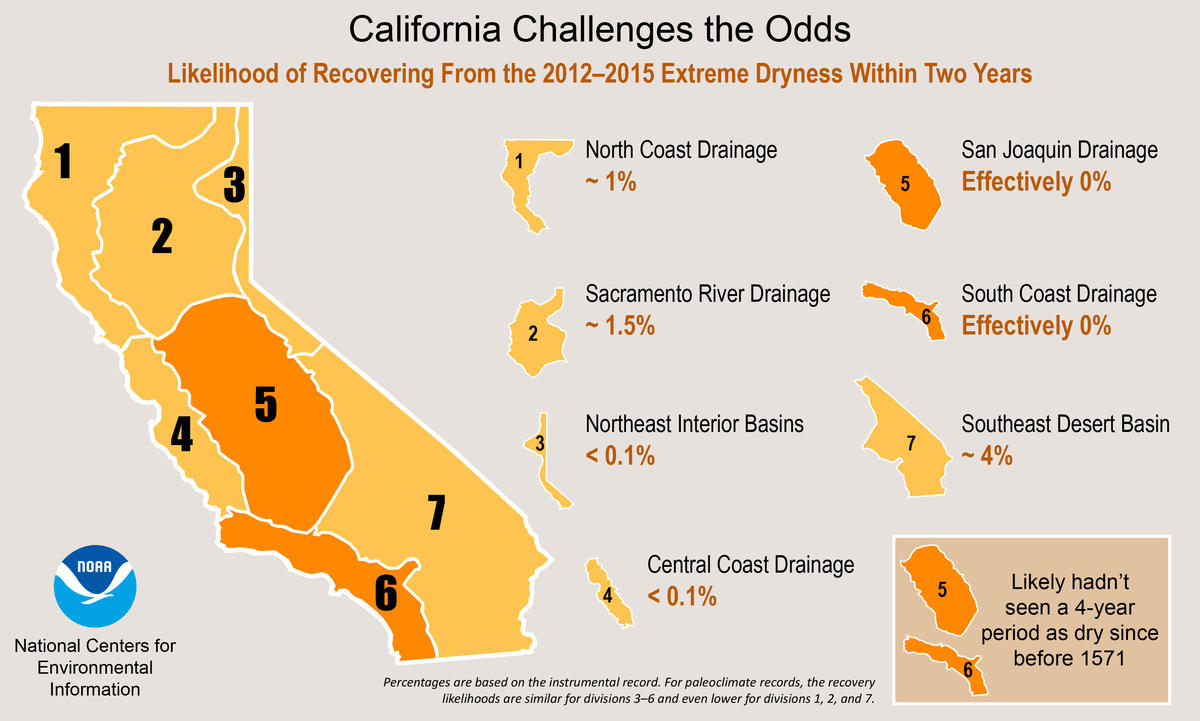 Megadroughts Could Be on the Way

By looking at precipitation alone, this study provides a unique view of California’s past climate as well as insights into its future. Under current conditions, the scientists found that precipitation patterns alone are capable of producing unprecedented dry conditions such as occurred in the San Joaquin Drainage and the South Coast Drainage regions during 2012–2015, without the compounding factor of increasing temperatures.

In a warming world, higher temperatures could combine with and amplify severe precipitation deficits. If temperatures continue to rise as they have, the U.S. Southwest could be facing “megadroughts”—worse than any droughts in the region since medieval times—by the second half of the 21st century.

Read the Study: Multi-Century Evaluation of Recovery from Strong Precipitation Deficits in California
North American Megadroughts in the Common Era: Reconstructions and Simulations
Paleoclimatology Data
What Is Paleoclimatology?
What Are Proxy Data?