Assessing the Global Climate in September 2021

The global temperature for September 2021 was the fifth highest for the month of September in the 142-year NOAA record, which dates back to 1880. The year-to-date (January-September) global surface temperature was the sixth highest on record. According to NCEI’s Global Annual Temperature Rankings Outlook, it is virtually certain (>99.0%) that the year 2021 will rank among the 10 warmest years on record. 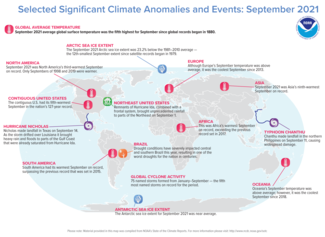 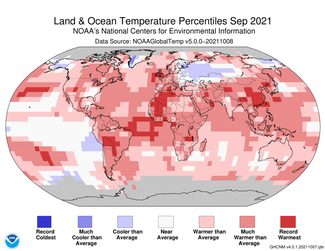 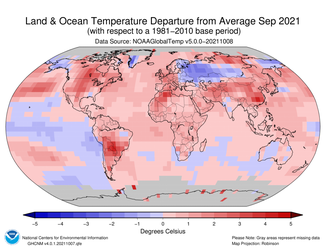 The Antarctic sea ice extent for September 2021 was 7.12 million square miles, which is close to average. As the Arctic sea ice extent reached its annual minimum extent, the Antarctic reached its annual maximum extent on September 1 at 7.24 million square miles, marking the end of its growth season and the beginning of its melt season.

For a more complete summary of climate conditions and events, see our September 2021 Global Climate Report.