Assessing the Global Climate in November 2021

The global temperature for November 2021 was the fourth highest for November in the 142-year NOAA record, which dates back to 1880. The year-to-date (January-November) global surface temperature was the sixth highest on record. According to NCEI’s Global Annual Temperature Rankings Outlook, it is virtually certain (> 99.0%) that the year 2021 will rank among the 10 warmest years on record. 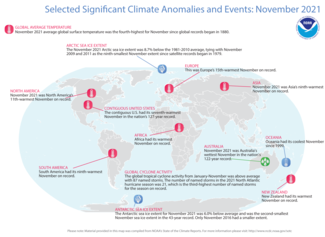 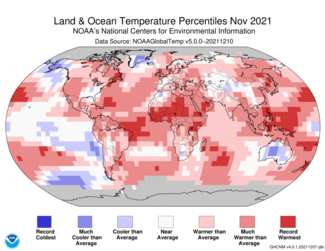 The November 2021 global surface temperature was 1.64°F (0.91°C) above the 20th-century average of 55.2°F (12.9°C), the fourth-warmest November in the 142-year record. The 10 warmest Novembers have occurred since 2004. November 2021 also marked the 45th consecutive November and the 443rd consecutive month with temperatures, at least nominally, above the 20th-century average.

During the month, temperatures were much above average across most of Africa and across parts of North America, South America, Asia, and across much of the Atlantic, western Pacific, and northeastern and southwestern Indian oceans. Temperatures were cooler than average across much of Alaska and Australia and across parts of Greenland, northwestern China, and the north, eastern and southeastern Pacific Ocean. 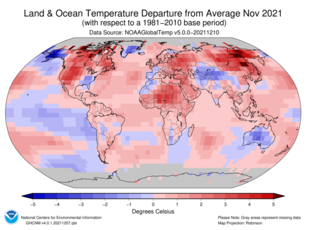 The November 2021 Arctic sea ice extent averaged 3.77 million square miles, which is 359,000 square miles below the 1981-2010 average. This value tied with 2009 and 2011 as the ninth-smallest November extent in the 43-year record, according to an analysis by the National Snow and Ice Data Center (NSIDC) using data from NOAA and NASA. 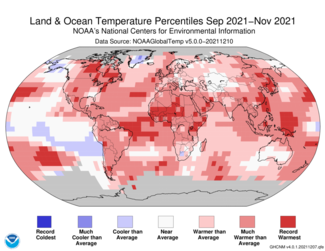 During the three-month period, temperatures were much above average across much of North America, South America, Africa and across parts of southern and eastern Asia as well as parts of the western Pacific Ocean, the Atlantic and Indian oceans. In contrast, parts of Alaska, Greenland, and the central and eastern Pacific Ocean had cooler-than-average September-November temperatures. 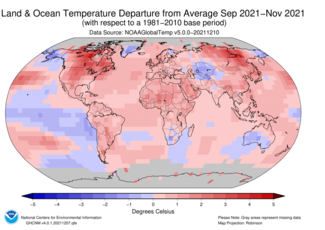 For a more complete summary of climate conditions and events, see our November 2021 Global Climate Report.