Assessing the Global Climate in 2021

2021 was the sixth-warmest year on record for the globe 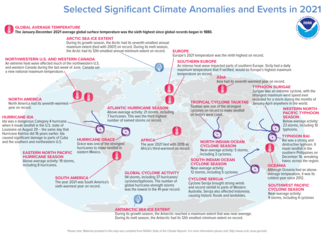 This summary from NOAA National Centers for Environmental Information is part of the suite of climate services NOAA provides to government, business, academia and the public to support informed decision-making. 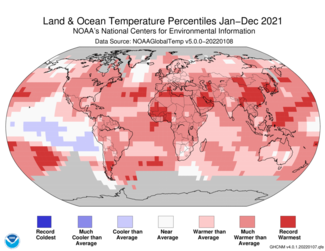 Global land and ocean surface temperature: For 2021, the average temperature across global surfaces was 1.51°F (0.84°C) above the 20th-century average. This was the sixth highest among all years in the 1880-2021 record. The year 2021 marks the 45th consecutive year (since 1977) with global temperatures, at least nominally, above the 20th-century average. The nine years spanning 2013 through 2021 rank among the 10-warmest years on record.

The year began in the midst of a cold phase El Niño Southern Oscillation (ENSO) episode across the central and eastern tropical Pacific Ocean, which developed in August 2020. This phase, known as La Niña, tends to cool global temperatures slightly, while the warm phase ENSO (also known as El Niño) tends to boost global temperatures.

Global ocean heat content (OHC): The upper ocean heat content, which addresses the amount of heat stored in the 0-2000 meters depth of the ocean, was record high in 2021, surpassing the previous record set in 2020. The seven highest OHC have all occurred in the last seven years (2015-2021). 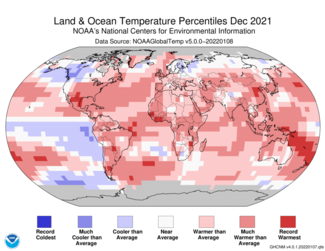 See our full report for a more complete summary of climate conditions and events.