Assessing the Global Climate in June 2022

Earth had its sixth-warmest June on record

Globally, June 2022 was the sixth-warmest June in the 143-year NOAA record. The year-to-date (January-June) global surface temperature was also the sixth warmest on record. According to NCEI’s Global Annual Temperature Outlook, there is a greater than 99% chance that 2022 will rank among the 10-warmest years on record but only an 11% chance that it will rank among the top five. 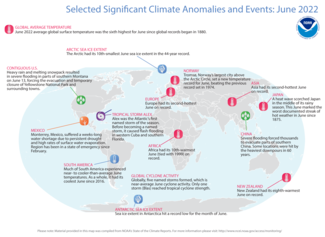 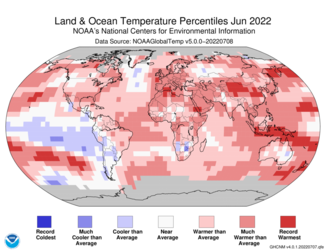 The June global surface temperature was 1.57°F (0.87°C) above the 20th-century average of 59.9°F (15.5°C). This ranks as the sixth-warmest June in the 143-year record. June 2022 marked the 46th consecutive June and the 450th consecutive month with temperatures, at least nominally, above the 20th-century average. The ten-warmest Junes on record have all occurred since 2010.

The Northern Hemisphere land-only surface temperature for June was 2.81°F (1.56°C) above average, making it the second warmest on record after June 2021. Europe had its second-warmest June on record, largely due to an unusually early heatwave heat wave coming from North Africa. Spain and France recorded temperatures not typically seen until July or August, breaking many temperature records for the month. Asia also had its second-warmest June on record.

Temperatures were above average throughout most of North America, Europe, and Asia and across parts of northern Africa, the Arabian Peninsula, and western and northern Oceania. Parts of China, the Middle East, and northern Africa experienced record-warm temperatures for June. Sea surface temperatures were above average across much of the northern, western, and southwestern Pacific, as well as parts of the Atlantic and eastern Indian oceans.

Temperatures were near- to cooler-than-average across parts of western and southern South America and in small areas of eastern Australia, western Russia, and southern Africa. Consistent with La Niña, sea surface temperatures were below average over much of the south-central, central, and eastern tropical Pacific. There were no areas with record-cold June temperatures in 2022. 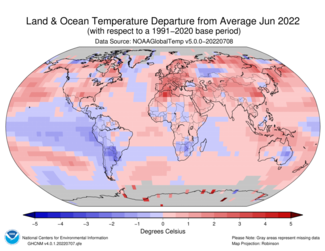 Arctic sea ice extent in June averaged 4.19 million square miles, which is 347,000 square miles — roughly the size of Sweden, Norway, and Denmark combined — below the 1981-2010 average and the 10th-smallest June extent in the 44-year record. According to an analysis by theNational Snow and Ice Data Center(NSIDC), regional sea ice extent was below average in the Barents, Chukchi, East Siberian, and Kara seas and Hudson Bay, while conditions in Baffin Bay were near normal. The 10-smallest June Arctic sea ice extents have occurred since 2010.

Although it was only a tropical storm for about 30 hours, Tropical Storm Alex was the Atlantic’s first named storm of the season. The East Pacific had two named storms in June, which is near-average activity. The West Pacific, which has below-average year-to-date activity, only had one named storm this month.

For a more complete summary of climate conditions and events, see our June 2022 Global Climate Report.