Assessing the Global Climate in August 2022

Earth had its sixth-warmest August on record

Globally, August 2022 was the sixth-warmest August in the 143-year NOAA record. The year-to-date (January-August) global surface temperature was the sixth-warmest on record. According to NCEI’s Global Annual Temperature Outlook, there is a greater than 99% chance that 2022 will rank among the 10-warmest years on record but less than 11% chance that it will rank among the top five. 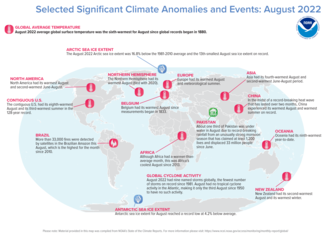 The August global surface temperature was 1.62°F (0.90°C) above the 20th-century average of 60.1°F (15.6°C). This was the sixth-warmest August in the 143-year record. August 2022 marked the 46th consecutive August and the 452nd consecutive month with temperatures, at least nominally, above the 20th-century average. The Northern Hemisphere August temperature tied with 2020 as the warmest for August on record at 2.16°F (1.20°C) above average. 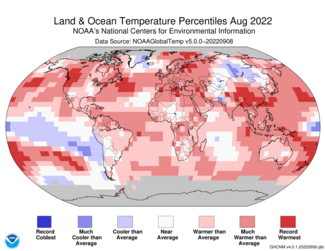 Temperatures were near- to cooler-than-average throughout most of South America and across parts of central Asia. Consistent with La Niña, sea surface temperatures were below average over much of the south-central, central, and eastern tropical Pacific. None of the world's surface had a record-cold temperature in August. 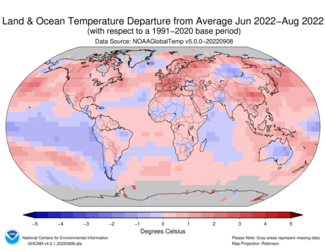 Arctic sea ice extent in August averaged 2.31 million square miles, which is about 467,000 square miles below the 1981-2010 average. This marks the 13th-smallest August extent in the 44-year record. Sea ice extent was well below average in the Barents, Chukchi, Laptev, Kara, and Greenland seas, and the Hudson Bay. Sea ice extent for August was not above average anywhere in the Arctic this month.

For a more complete summary of climate conditions and events, see our August 2022 Global Climate Report.

For May, the average contiguous U.S. temperature was 60.8°F, 0.6°F above the 20th-century average and ranked in the middle third

Reporting on the State of the Climate in 2016

A new State of the Climate report confirmed that 2016 surpassed 2015 as the warmest year in 137 years of recordkeeping. Last

Assessing the Global Climate in March 2021