Assessing the Global Climate in September 2022

Earth had its fifth-warmest September on record 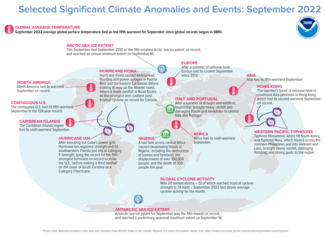 September 2022 tied with 2021 as the globe’s fifth-warmest September in the 143-year NOAA record. The year-to-date (January-September) global surface temperature was the sixth warmest on record. According to NCEI’s Global Annual Temperature Outlook, there is a greater than 99% chance that 2022 will rank among the 10-warmest years on record but less than 5% chance that it will rank among the top five. 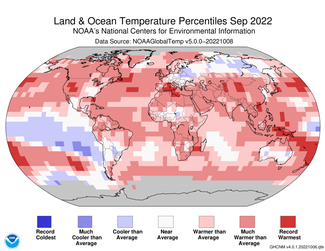 Temperatures were much above average across most of North America, Africa, the southern half of Asia, the Atlantic, northern, western and southern Pacific oceans, as well as parts of northern South America. Temperatures were near- to cooler-than-average across parts of Europe, northern Asia, Australia, southern South America, and the central and eastern tropical, southeastern Pacific Ocean. However, no land or ocean surfaces had a record-cold September. 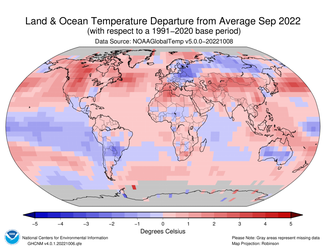 Globally,September 2022 had the eighth-lowest September sea ice extent on record.

Arctic sea ice extent in September averaged 1.88 million square miles, which is about 595,000 square miles below the 1981-2010 average and tied with 2010 as the 11th-smallest September extent in the 44-year record. According to the National Snow and Ice Data Center (NSIDC), the Arctic sea ice extent reached its annual minimum extent on September 18, marking the end of the melt season. The 2022 annual Arctic minimum extent was 1.80 million square miles, tying with 2017 and 2018 as the 10th smallest since records began in 1979. The 16 smallest annual minimum extents have all occurred in the last 16 years (2007-2022).

Above-average September precipitation was observed across parts of the Caribbean, the southeastern contiguous U.S., central Europe, northern and southern parts of Asia, and across parts of Australia. Parts of Africa also had wetter-than-average conditions. Of note, copious rainfall triggered deadly floods and landslides across Nigeria, Uganda, and Senegal. Tropical cyclones across the globe triggered devastating floods across the Caribbean, Central America, Mexico, the southeastern contiguous U.S., eastern Asia, and eastern Canada. Meanwhile, drier-than-average conditions were present across parts of the central contiguous U.S., southern South America, and eastern Asia.

For a more complete summary of climate conditions and events, see our September 2022 Global Climate Report.