Assessing the Global Climate in 2022

The globe had its sixth-warmest year on record

According to NOAA scientists, the global surface temperature for 2022 was the sixth highest since record keeping began in 1880. In a separate analysis of global temperature data also released today, NASA ranks 2022 as the fifth-warmest year on record, tying with 2015. Analysis from the Copernicus program ranked 2022 as the fifth-warmest year on record. December’s global surface temperature was the eighth highest in the 143-year record, according to NOAA.

This summary from NOAA National Centers for Environmental Information is part of the suite of climate services that NOAA provides to government, business, academia, and the public to support informed decision-making. 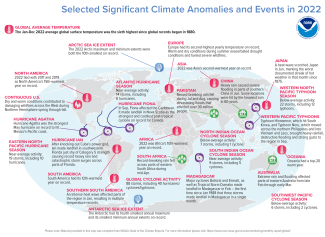 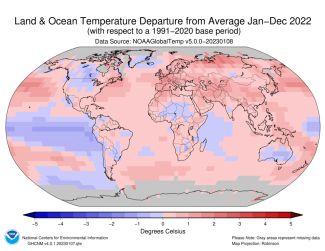 Global ocean heat content (OHC): The upper ocean heat content, which addresses the amount of heat stored in the 0-2000 meters depth of the ocean, was record high in 2022, surpassing the previous record set in 2021. The four highest OHC have all occurred in the last four years (2019-2022).

Antarctic sea ice extent: The 2022 annual Antarctic sea ice extent was at a near-record low at 4.09 million square miles. Only the year 1987 had a smaller annual extent. During the year, each month had an extent that ranked among the five smallest for their respective months, while the months of February, June, July, and August had their lowest monthly extent on record.

A total of 88 named storms occurred across the globe in 2022, which was near the 1991-2020 average. Of those, 40 reached tropical cyclone strength (winds ≥ 74 mph) and 17 reached major tropical cyclone strength (winds ≥ 111 mph). Both of these counts were below their 1991-2020 averages. The global accumulated cyclone energy (ACE: an integrated metric of the strength, frequency, and duration of tropical storms) was the fourth lowest since 1981. 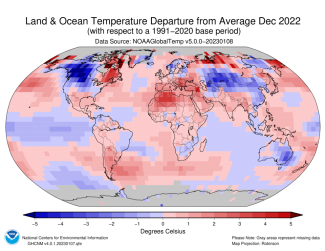 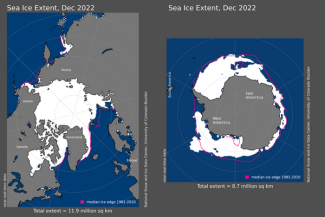 See our full report for a more complete summary of climate conditions and events.

Assessing the U.S. Climate in March 2022

The current multi-year drought across the West is the most extensive and intense drought in the 22-year history of the U.S

Assessing the Global Climate in 2017