In 1991, Halloween was no treat for many residents in parts of Iowa and Minnesota. The morning of October 31, 1991, a storm—which would eventually become known as the “Halloween Blizzard” in most of Minnesota and the “Halloween Ice Storm” in Iowa—began moving quickly northeastward through the Mississippi Valley.

By mid-morning on Halloween, a mixture of snow, sleet, and freezing rain blanketed southeast Minnesota and much of eastern Iowa. And, as the mixture continued to come down well into the afternoon of November 1, many areas in Iowa saw up to two inches of ice accumulate on top of eight to 15 inches of snow. 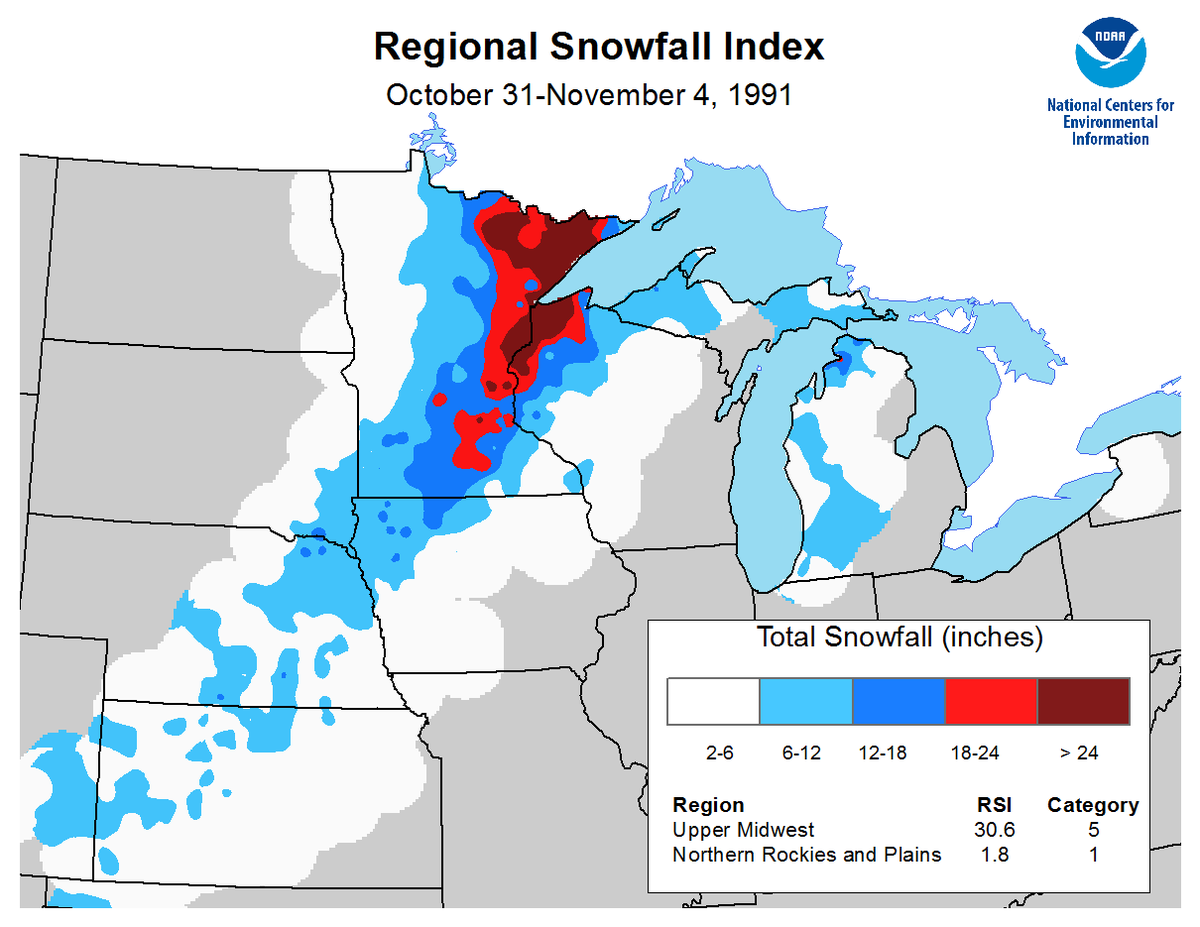 Winds of 30 to 40 mph downed trees and utility poles, leaving some 80,000 homes in Iowa without power. The downed lines not only left residents without power for more than a week in some cases, but they also closed several highways as they fell across the roads. At the time, the storm’s damage to utilities alone was estimated at nearly $63 million. The governor of Iowa declared a state of emergency in 52 of the state’s 99 counties because of the storm’s severity.

In Minnesota, as much as three inches of ice downed power lines and poles, leaving at least 20,000 people without power. With winds up to 60 mph and snowdrifts up to ten feet, hundreds of motorists became stranded and had to take shelter in the National Guard Armory and a local mall in Albert Lea.

On November 1, 1991, over 900 schools and businesses were closed in Minnesota alone, and a number of roofs collapsed under the weight of the ice and snow. At least 20 people died in traffic accidents or from heart attacks while digging out from the storm. And, the governor of Minnesota declared a state of emergency in two counties.

By the storm’s end, it had affected over 23 million people in the Upper Midwest, which includes Iowa, Minnesota, Wisconsin, and Michigan. And, it ranked as a Category 5 on the Regional Snowfall Index—the most extreme category.

On October 31, 1991, 30 locations broke daily snowfall records in Iowa, 25 in Minnesota, and seven in Wisconsin.

According to the May 23, 2017, U.S. Drought Monitor, moderate to extreme drought covers 4.5% of the contiguous United States, a

According to the January 23, 2018, U.S. Drought Monitor, moderate to extreme drought covers 35.4% of the contiguous United