An upper-level ridge of high pressure remained anchored off the west coast of North America with a strong low-pressure trough occupying the southwestern United States for most of the week. The trough brought above-normal precipitation and below-normal temperatures to the Southwest. This circulation pattern split the storm track in two, with one track across the southern United States and the other track across southern Canada. It also put a northwesterly jet stream flow across much of the continent, which directed colder-than-normal air masses into the United States east of the Rockies.

Near the end of the week, the southwestern trough sent a low-pressure system into the southern Plains, and this low teamed up with cold fronts to spread above-normal precipitation across the contiguous United States from the southern Plains to the Northeast. The northwesterly flow kept much of the Pacific Northwest, interior West, central to northern Plains, and parts of the Midwest, drier than normal. A subtropical high-pressure system over the Gulf of Mexico kept much of the Gulf Coast drier and warmer than normal.

Drought and abnormal dryness contracted in parts of the Southwest and along the edge of the wet area from the southern Plains to Southeast. Drought and abnormal dryness expanded or intensified where precipitation was below normal or absent in the Pacific Northwest to northern California, central High Plains, and parts of the Gulf Coast States. The national drought footprint shrank slightly as drought contraction was a little more than drought expansion.

Abnormal dryness and drought are currently affecting over 60 million people across the United States including Puerto Rico—about 19.5% of the population. 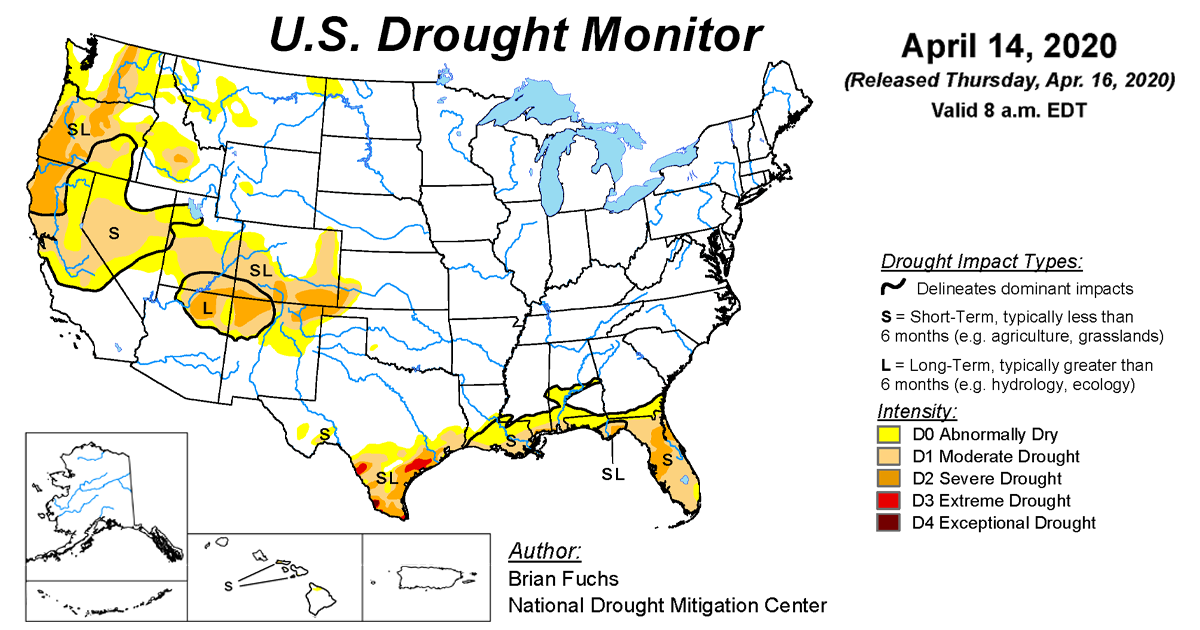 According to the February 22, 2022, U.S. Drought Monitor, moderate to exceptional drought covers 48.2% of the United States

According to the May 31, 2022, U.S. Drought Monitor, moderate to exceptional drought covers 41.4% of the United States including