According to the August 11, 2020, U.S. Drought Monitor, moderate to extreme drought covers 28.8% of the United States including Puerto Rico, an increase from last week’s 28%. The worst drought categories (extreme to exceptional drought) increased from 2.6% last week to 3.2%.

The upper-level circulation pattern over North America was very active with strong troughs and closed lows moving across southern Canada and the U.S. border. Over the contiguous United States, a strong high pressure ridge dominated the southern states, but with a few exceptions. Troughs competed with it across the West Coast and in the Ohio Valley, especially at the beginning of the week.

With the eastern trough, a strong cold front had penetrated deep into the South at the beginning of the week. The front lingered across much of the country east of the Rockies, leaving behind a legacy of cooler-than-normal temperatures across the Mississippi and Ohio Valleys and parts of the Plains. The western trough left below-normal temperatures across parts of southern California and the Pacific Northwest.

Otherwise, ridging kept temperatures warmer than normal across the Southwest, southern to central High Plains, and Mid-Atlantic to Northeast. This circulation pattern kept most weather systems along and north of the Canadian border, and it inhibited the Southwest Monsoon, so most of the West was much drier than normal. At the beginning of the week, Hurricane Isaias left a swath of above-normal precipitation from the Mid-Atlantic coast up the Hudson River.

Fronts east of the Rockies generated showers and thunderstorms, but the rainfall was above normal only in spotty areas with large expanses of adjacent areas staying drier than normal, especially in the southern and central Plains to the Ohio Valley and central Appalachians. Drought and abnormal dryness contracted where it rained, but expanded or intensified where it didn’t, notably across parts of the West, Plains, southern Mississippi Valley, and New England. Expansion outweighed contraction, so the U.S. drought footprint grew this week.

Abnormal dryness and drought are currently affecting over 105 million people across the United States including Puerto Rico—about 33.8% of the population. 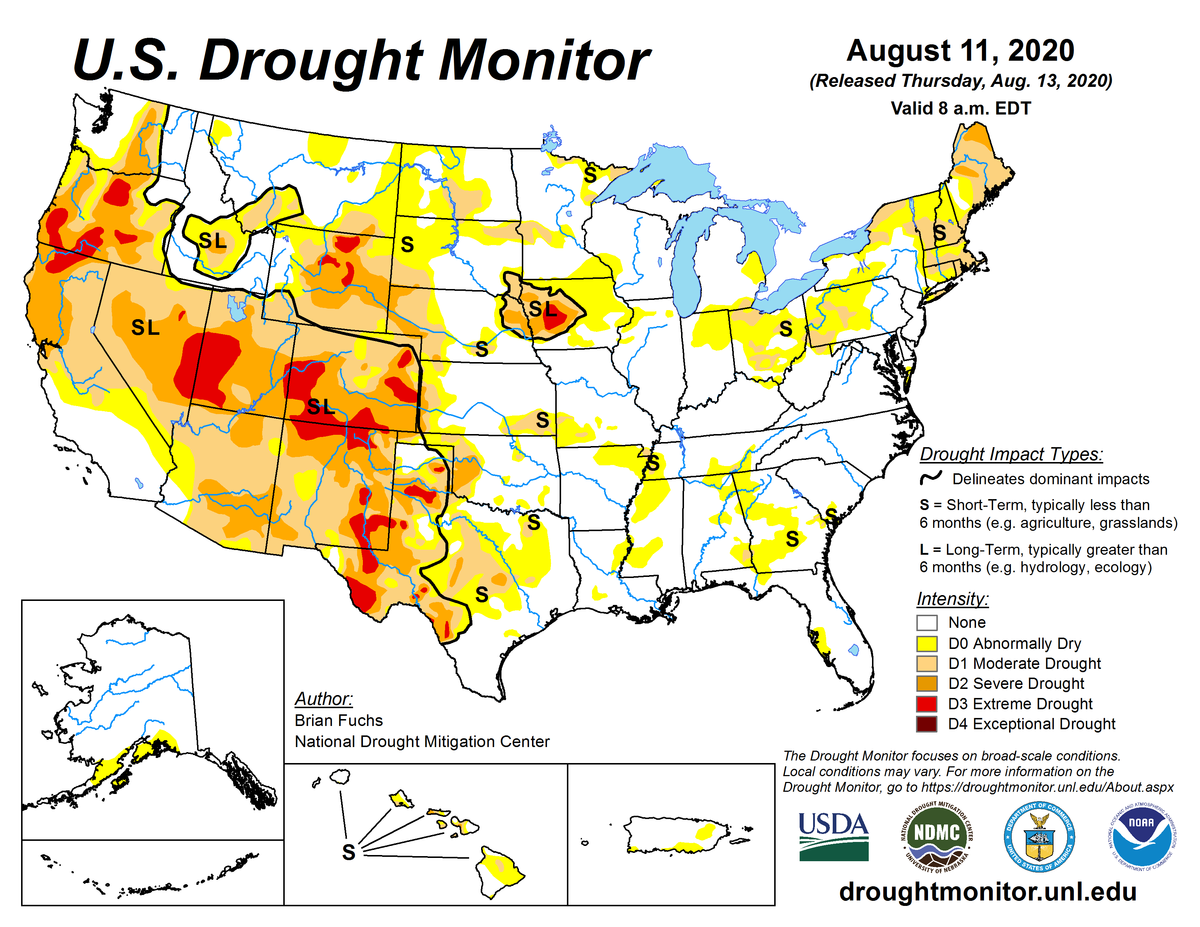 The most recent U.S. Drought Outlook is available from NOAA’s Climate Prediction Center and the U.S. Department of Agriculture's World Outlook Board provides information about the drought’s influence on crops and livestock.

According to the July 7 U.S. Drought Monitor, moderate to extreme drought covers 21.6% of the United States including Puerto Rico.

According to the April 25 U.S. Drought Monitor, moderate to extreme drought covers 6.1% of the contiguous U.S.

According to the September 8 U.S. Drought Monitor, moderate to exceptional drought covers 32.7% of the United States including Puerto Rico.

According to the October 27 U.S. Drought Monitor, moderate to exceptional drought covers 38.8% of the United States including Puerto Rico.