According to the August 20, 2019, U.S. Drought Monitor, moderate to extreme drought covers 8.0% of the United States including Puerto Rico, an increase from last week’s 6.8%. The worst drought categories (extreme to exceptional drought) increased from 0.2% last week to 0.3%.

A high-pressure ridge in the jet stream flow stretched from the southern Plains, across the West Coast, to western Alaska. The ridge deflected storm systems away from these regions, keeping the week drier and warmer than normal. Upper-level weather systems moved across eastern Alaska to central Canada and sent cold fronts and surface low-pressure systems into the contiguous United States east of the Rockies. These systems brought wetter- and cooler-than-normal weather to eastern interior Alaska, the northern to central Plains, and Upper Mississippi Valley, and wetter-than-normal weather to parts of the Northeast. A warm southerly flow kept temperatures above normal east of the Mississippi River.

Humid tropical air from the Gulf of Mexico was drawn into the Southeast where it fed showers and thunderstorms triggered by stalled fronts and afternoon convective heating. The dry and hot weather in the Southwest to southern Plains, and in southern Alaska, this week was a continuation of conditions going on for the last two to three months; drought and abnormal dryness continued to expand there as a result. Drought and abnormal dryness contracted in parts of the southern Plains, Southeast, and Midwest where spotty showers left areas of above-normal precipitation. However, expansion also occurred in those areas missed by the rain. When the regional changes are combined, the overall result this week was an expansion of the national drought area.

Abnormal dryness and drought are currently affecting over 74 million people across the United States including Puerto Rico—about 24.0% of the population. 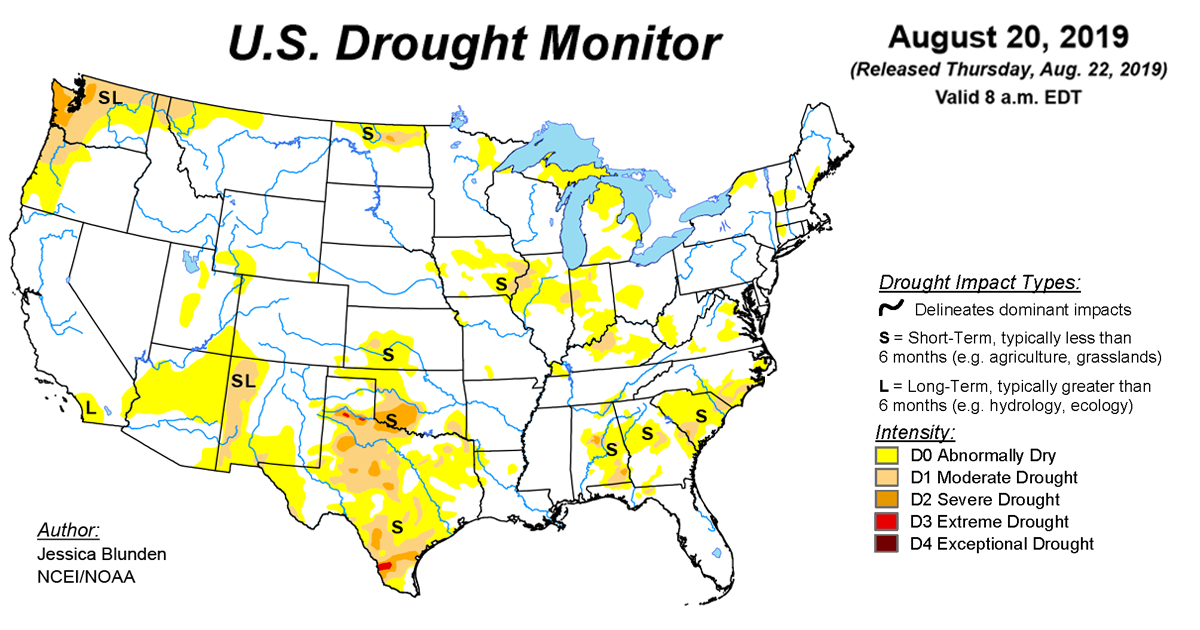 According to the September 5 U.S. Drought Monitor, moderate to extreme drought covers 13.5% of the contiguous U.S.

According to the December 26 U.S. Drought Monitor, moderate to extreme drought covers 26.4% of the contiguous U.S.

Our new temperature and precipitation percentile maps give you a more detailed look at climate conditions in the United States.