The upper-level circulation pattern over the contiguous United States consisted of a strong ridge of high pressure over the West with a trough over the East. During the first half of the week, beneath the eastern trough, surface low-pressure systems moved along a leftover cold front that was stalled out over the Southeast. During the second half of the week, rainfall from Tropical Storm Marco was sheared off and blown over the Southeast while Marco’s surface circulation moved westward along the Louisiana and Texas coast. These conditions resulted in above-normal precipitation from Alabama to Virginia. Meanwhile, the main storm track stayed far to the north, along the U.S.-Canadian border. The ridge kept the West and most of the Plains dry and warmer than normal.

The eastern trough and cloudiness associated with the rainfall gave the southeastern third of the contiguous United States a cooler-than-normal week. The Great Lakes and Northeast were mostly drier and near to warmer than normal. With most of the rain falling over areas that were not in drought, and areas that were in drought having continued hot and dry weather, abnormal dryness and drought expanded or intensified across much of the West and Plains, and parts of the Midwest to Northeast. Expansion far exceeded the small amount of contraction that occurred mostly in the Southeast, so the U.S. drought footprint grew again this week.

Abnormal dryness and drought are currently affecting over 124  million people across the United States including Puerto Rico—about 39.9% of the population 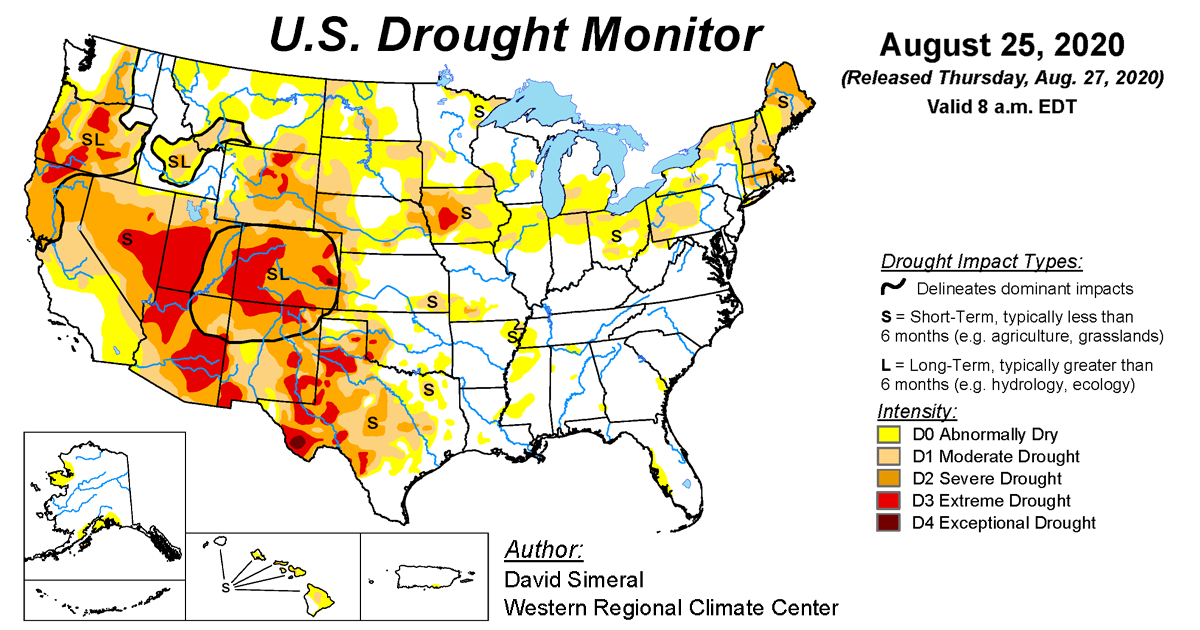 According to the June 26 U.S. Drought Monitor, moderate to exceptional drought covers 24.1% of the United States.

According to the September 5 U.S. Drought Monitor, moderate to extreme drought covers 13.5% of the contiguous U.S.

According to the August 7 U.S. Drought Monitor, moderate to exceptional drought covers 30.2% of the United States.