According to the August 6, 2019, U.S. Drought Monitor, moderate to extreme drought covers 5.6% of the United States including Puerto Rico, a decrease from last week’s 6.9%. For the 12th week in a row, the worst drought categories (extreme to exceptional drought) remained at 0.1%.

A high-pressure ridge in the jet stream flow was centered over the southwestern United States this week, with another ridge poking into Alaska. The contiguous United States’ ridge kept most of the western United States warmer and drier than normal. The ridge redirected Pacific weather systems into Canada. The systems and their associated fronts brought rain to the northern Plains, Gulf of Mexico coast, and East as they moved into an upper-level trough over the U.S. East Coast. They also contributed to cooler-than-normal temperatures from the Mid-Mississippi Valley to the Southeast. The Alaska ridge kept temperatures warmer than normal across much of the state and precipitation drier than normal in the southern portions, although beneficial rains occurred from central to northern Alaska.

Tropical waves brought above-normal rainfall to the U.S. Virgin Islands and eastern Puerto Rico, while a monsoon trough and tropical disturbances brought wet conditions to parts of Micronesia, and rainfall was above normal over the southern islands of Hawaii. As a result of this overall weather pattern, drought and abnormal dryness contracted in central Alaska, southern Hawaii, and parts of Micronesia, Puerto Rico, the U.S. Virgin Islands, and the southeastern contiguous United States. However, drought or abnormal dryness expanded in the contiguous United States, especially in the Pacific Northwest, southern Plains, and Midwest, and well as in the central Hawaiian Islands.

Abnormal dryness and drought are currently affecting over 47 million people across the United States including Puerto Rico—about 15.3% of the U.S. population. 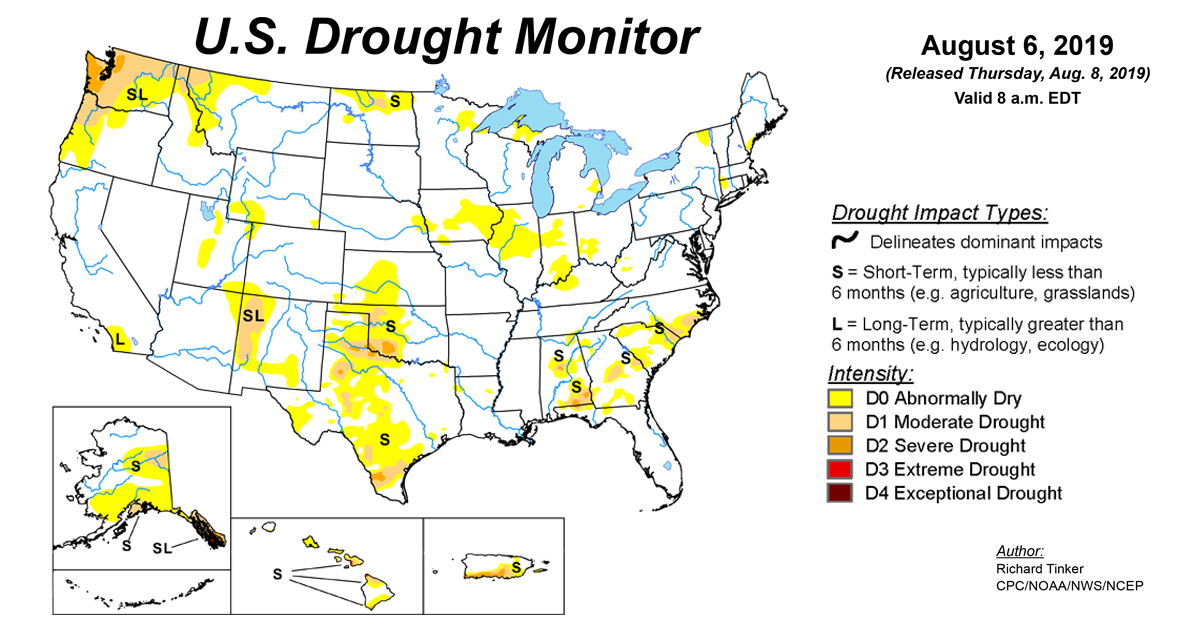