A couple of Pacific weather systems moved in the jet stream flow across the contiguous United States. The weather systems brought rain or snow to the coastal Pacific Northwest, dried out as they traversed an upper-level ridge over the West, then picked up Gulf of Mexico and Atlantic moisture as they moved across the southern Plains to the East Coast.

Some precipitation fell over the coastal and Cascade mountain ranges of Oregon and Washington, as well as parts of the northern Rockies, but amounts were low enough that the week was still drier than normal in these areas. Otherwise, most of the West was dry beneath the upper-level ridge.

East of the Rockies, bands of heavy precipitation fell across Kansas to the Great Lakes, along the Ohio River to northeast Ohio, over parts of Texas, and along the Gulf Coast and Atlantic Seaboard. Much of the northern Plains to Upper Mississippi Valley was dry. Temperatures were near to cooler than normal across much of the West, southern Plains, and Lower Mississippi Valley, and warmer than normal in the northern Plains, South Texas, Great Lakes, Gulf Coast, and East Coast.

Improvement in abnormally dry and drought conditions occurred where precipitation was above normal, especially along the Gulf Coast, parts of the central Plains to Great Lakes, and in the Northeast. Drought expanded or intensified in some areas where dryness continued, notably in the interior West, northern Plains to Upper Mississippi Valley, and western to northeast Texas.  Drought contraction was more than expansion, so the overall U.S. drought footprint decreased.

Abnormal dryness and drought are currently affecting over 133million people across the United States including Puerto Rico—about 42.9% of the population. 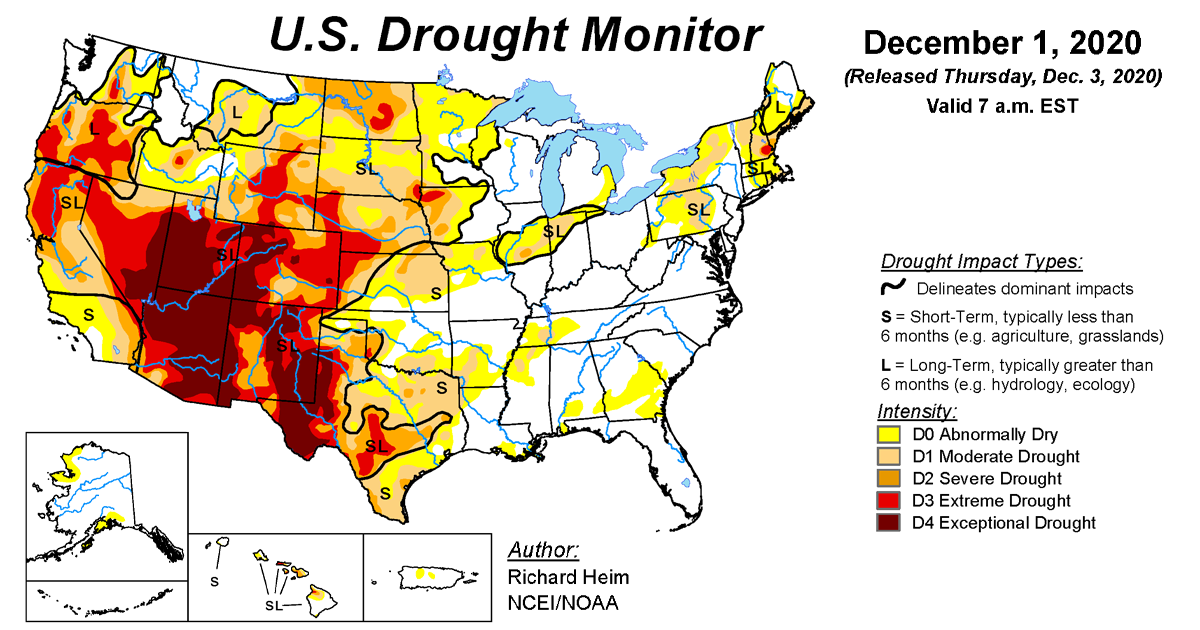 In addition to Drought.gov, you can find further informantion on the current drought as well as on this week’s Drought Monitor update at the National Drought Mitigation Center. See their recent news releases.

According to the June 30, 2020, U.S. Drought Monitor, moderate to exceptional drought covers 21.4% of the United States

According to the November 14, 2017, U.S. Drought Monitor, moderate to exceptional drought covers 13.1% of the contiguous United