According to the February 18, 2020, U.S. Drought Monitor, moderate to extreme drought covers 8.0% of the United States including Puerto Rico, a decrease from last week’s 8.9%. The worst drought categories (extreme to exceptional drought) increased slightly from 0.14% for last week to 0.20% for this week.

A strong westerly circulation pattern over the northeastern Pacific Ocean continued to funnel Pacific weather systems into the Pacific Northwest. Like previous weeks, the upper-level pattern was generally westerly across the United States, so the Pacific systems moved fairly rapidly, soaking windward sides of the Coastal and Rocky Mountain ranges and drying out as they moved into the rainshadow areas. The Pacific systems entered the Great Plains region starved of moisture, but they picked up some Gulf of Mexico moisture as they continued their eastward trek, bringing precipitation to parts of the southern Plains to Ohio Valley and Southeast. With this pattern, much of the contiguous United States was drier than normal, especially the Southwest, central to northern Plains, and Northeast, but also parts of Florida, coastal Texas, and the interior Northwest.

Fronts associated with the upper-level Pacific weather systems pulled in Canadian air behind the fronts, resulting in a colder-than-normal week across the northern and central Plains to Great Lakes. Warmer-than-normal air lingered in the Southeast from the Gulf Coast to Mid-Atlantic Coast. Contraction of drought and abnormal dryness occurred in parts of the Southwest, Northwest, and southern Plains, but expansion occurred in other parts, so overall there was little change in the national drought status this week.

Abnormal dryness and drought are currently affecting over 48 million people across the United States including Puerto Rico—about 15.5% of the population. 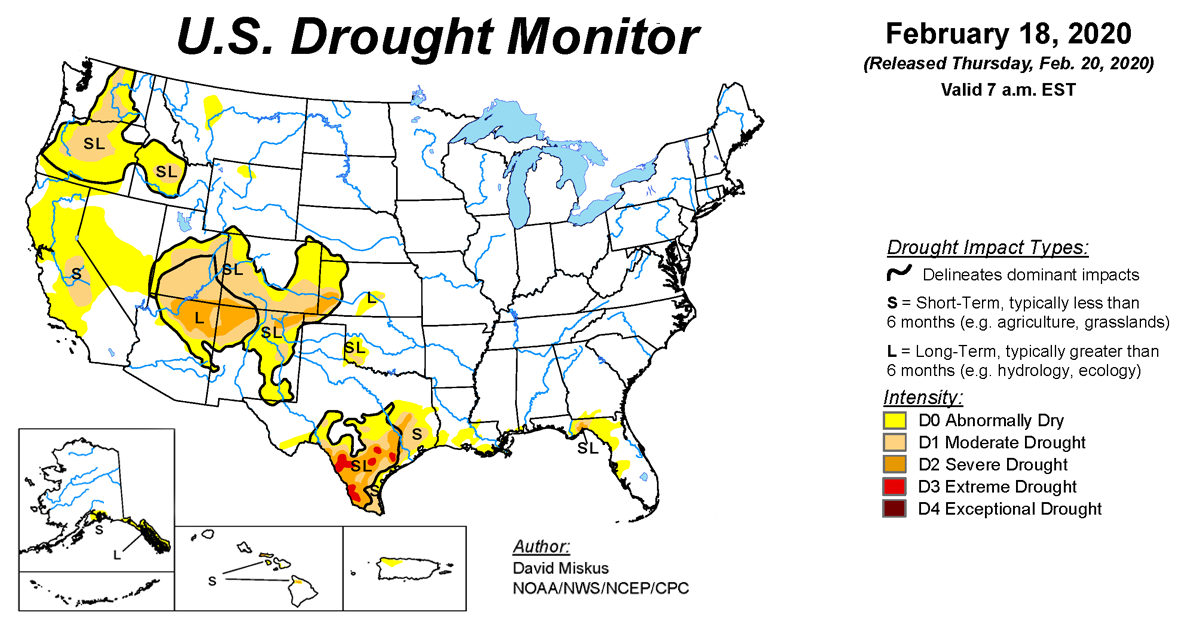 According to the March 5, 2019, U.S. Drought Monitor, moderate to exceptional drought covers 10.4% of the United States, a

According to the June 26, 2018, U.S. Drought Monitor, moderate to exceptional drought covers 24.1% of the United States, an