According to the January 21, 2020, U.S. Drought Monitor, moderate to extreme drought covers 9.6% of the United States including Puerto Rico, an increase from last week’s 9.1%. The worst drought categories (extreme to exceptional drought) stayed the same as last week: 0.1%.

Pacific weather systems migrated across the contiguous United States in a fairly westerly jet stream flow. The Pacific fronts dropped precipitation along the coastal ranges, but the air masses quickly dried out as they crossed the interior West, resulting in below-normal precipitation from the High Plains west to the coastal ranges. East of the Rockies, they tapped Gulf of Mexico moisture and dropped above-normal precipitation in a storm track that stretched from Texas to the Great Lakes.

The Gulf of Mexico and Atlantic coasts were mostly drier than normal. The jet stream flow amplified as the week progressed, producing a strong trough over the eastern contiguous United States with a ridge migrating across the West into the central contiguous United States. Cold arctic air was directed by the trough into the East behind surface frontal low-pressure systems.

Weekly temperatures were warmer than normal from Texas to the Mid-Atlantic, and colder than normal along the West Coast and northern to central Plains. Drought and abnormal dryness expanded across parts of the West, southern Plains, Gulf Coast, and Mid-Atlantic coast, but contracted in parts of the northern Rockies and southern to central Plains, as well as Hawaii and the Alaska panhandle.

Abnormal dryness and drought are currently affecting over 39 million people across the United States including Puerto Rico—about 12.8% of the population. 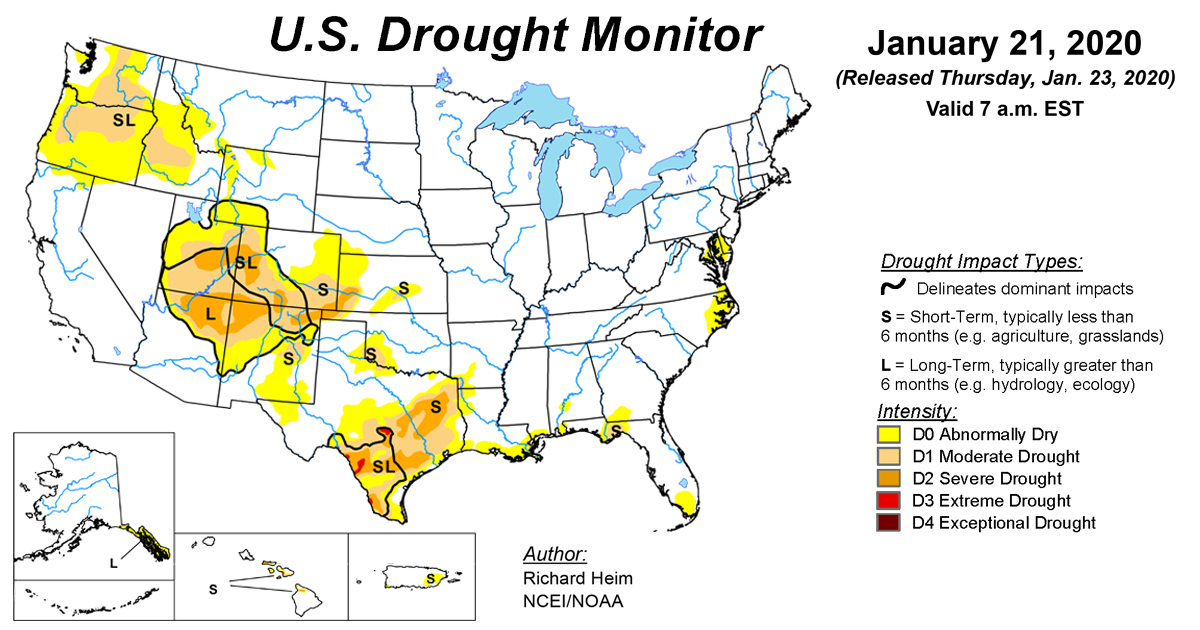 According to the January 21 U.S. Drought Monitor, moderate to extreme drought covers 9.6% of the United States including Puerto Rico.

According to the September 10 U.S. Drought Monitor, moderate to extreme drought covers 14.3% of the United States including Puerto Rico.

Pack rats gather plant materials and accumulate them in dry caves and crevices, where they are preserved for thousands of years.