According to the January 28, 2020, U.S. Drought Monitor, moderate to extreme drought covers 9.2% of the United States including Puerto Rico, a decrease from last week’s 9.6%. The worst drought categories (extreme to exceptional drought) decreased from 0.06% last week to 0.04% this week.

A series of Pacific weather systems continued to move across the contiguous United States in a fairly westerly jet stream flow. The systems dropped copious amounts of precipitation along the Coastal and Cascade mountain ranges of Northern California and the Pacific Northwest, with above-normal precipitation continuing across most of the Pacific Northwest to the Rockies. The Pacific systems were dried out once they crossed the Rockies, but some picked up Gulf of Mexico moisture to provide above-normal precipitation from parts of New Mexico northeastward to the Great Lakes.

Surface lows were generated by the upper-level Pacific systems, with some tracking to the Northeast and others moving along the Gulf Coast. The Gulf lows gave Texas to the Lower Mississippi Valley above-normal precipitation, while the others generated above-normal precipitation in the Middle Appalachian to Mid-Atlantic states. It was drier than normal from California to the Rio Grande Valley, across most of the northern Plains and Southeast, and parts of the central High Plains and Ohio Valley.

With a westerly flow, most of the contiguous United States was warmer than normal, with only the Southeast having near- to cooler-than-normal temperatures. Drought and abnormal dryness expanded in California and across parts of the Southeast, but contracted in parts of the Pacific Northwest, Four Corners States, and southern Plains.

Abnormal dryness and drought are currently affecting over 51 million people across the United States including Puerto Rico—about 16.7% of the population. 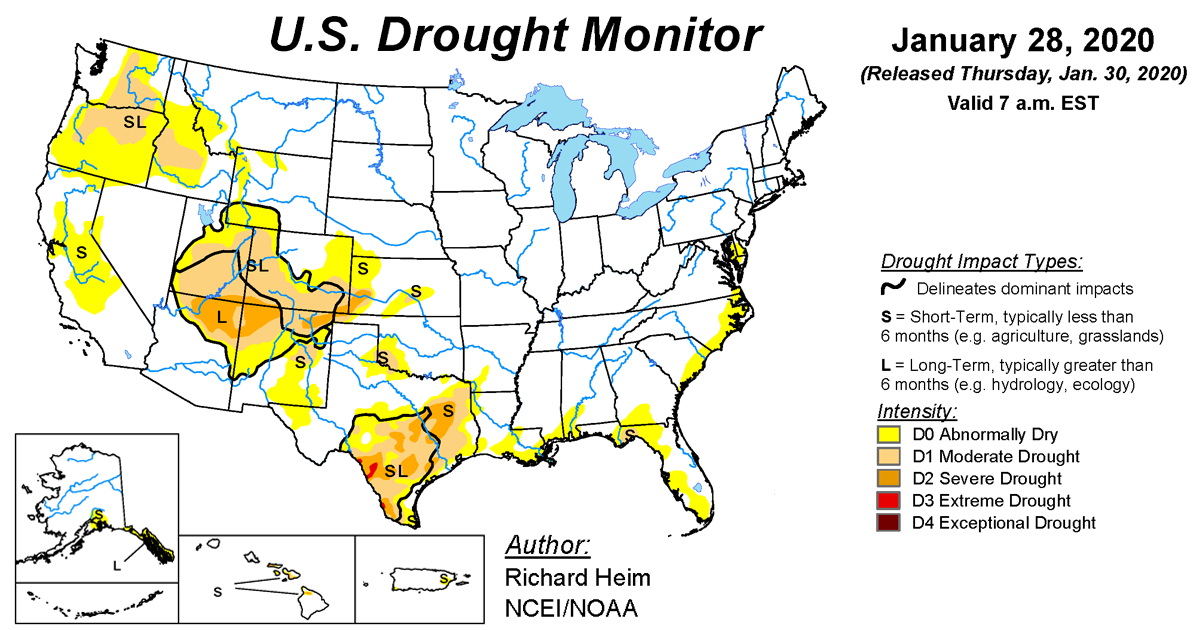 According to the February 7 U.S. Drought Monitor, moderate to exceptional drought covers 14.3% of the contiguous U.S.

According to the January 2 U.S. Drought Monitor, moderate to extreme drought covers 27.7% of the contiguous U.S.

According to the January 24 U.S. Drought Monitor, moderate to exceptional drought covers 16.1% of the contiguous U.S.