According to the July 2, 2019, U.S. Drought Monitor, moderate to extreme drought covers 3.3% of the United States and Puerto Rico, the same as last week. For the seventh week in a row, the worst drought categories (extreme to exceptional drought) remained at 0.1%.

A strong high-pressure ridge built up over the southern and central parts of the continental United States, with a trough dominating the West Coast and another ridge upstream over Alaska. Pacific fronts moved into the trough over the West, but they stalled out over the central Plains to Great Lakes as they rode over the top of the ridge. The continental U.S. ridge pumped Gulf of Mexico moisture northward where it produced above-normal precipitation in the northern Plains to Upper Midwest when it encountered the stationary fronts.

Above-normal precipitation also fell in the southern Plains along the Gulf Coast, and in parts of the Pacific Northwest and northern New England. The week was cooler than normal beneath the trough across much of the West, and in the southern Plains to Lower Mississippi Valley beneath clouds and rain. Otherwise, it was warmer and drier than normal beneath the ridge over the continental United States and the ridge over Alaska. Drought and abnormal dryness contracted in parts of the northern Plains and South where it rained, but expanded in dry areas in the Pacific Northwest and other parts of the Plains and Southeast.

Abnormal dryness and drought are currently affecting over 28 million people across the United States and Puerto Rico—about 9.1% of the population. 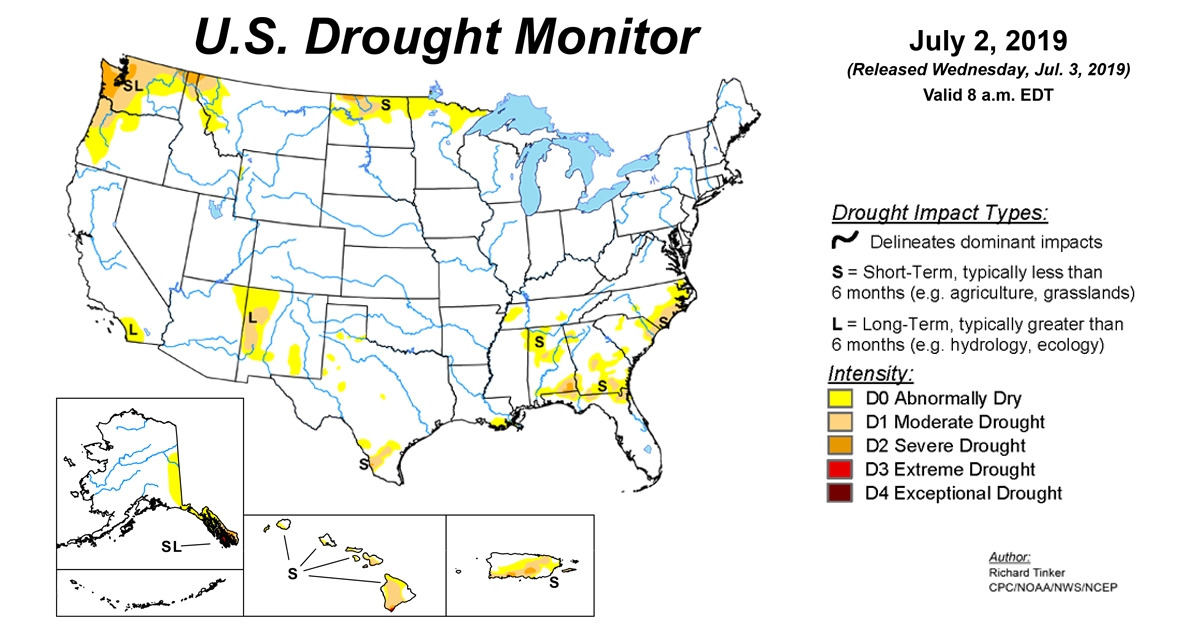 According to the April 25, 2017, U.S. Drought Monitor, moderate to extreme drought covers 6.1% of the contiguous United States

According to the July 20, 2021, U.S. Drought Monitor, moderate to exceptional drought covers 40.1% of the United States

On the morning of May 28, 1900, thousands of people across the southeastern United States gathered to witness a rare and