According to the July 28, 2020, U.S. Drought Monitor moderate to extreme drought covers 27.4% of the United States including Puerto Rico, an increase from last week’s 26.3%. The worst drought categories (extreme to exceptional drought) increasedfrom 2.2% last week to 2.4%.

High pressure dominated the southern half of the contiguous United States again. Upper-level weather systems tracked across the U.S.-Canadian border, dragging surface lows and fronts along with them. The High brought hot temperatures to much of the South, East, and West, with daily maximum temperatures exceeding 90°F every day. The fronts brought cooler temperatures to the Upper Midwest at the beginning of the week, but maximum temperatures began to exceed 90°F across the Plains and eastward as the week wore on.

The hot temperatures increased evapotranspiration that dried soils and stressed crops and other vegetation. Drought or abnormal dryness expanded or intensified across parts of the West, Midwest, Southeast, and Northeast where little to no rain fell and 30- to 90-day precipitation deficits mounted. However, locally heavy rainfall was generated by the fronts in parts of the Plains, Midwest, and East. Heavy rain also fell across southern Texas when Hurricane Hanna struck, and Hurricane Douglas graced parts of Hawaii with beneficial rain. Where the rain fell on drought or abnormally dry areas in these regions, contraction occurred. Expansion outweighed contraction, so the U.S. drought footprint grew this week.

Abnormal dryness and drought are currently affecting over 129million people across the United States including Puerto Rico—about 41.6% of the population. 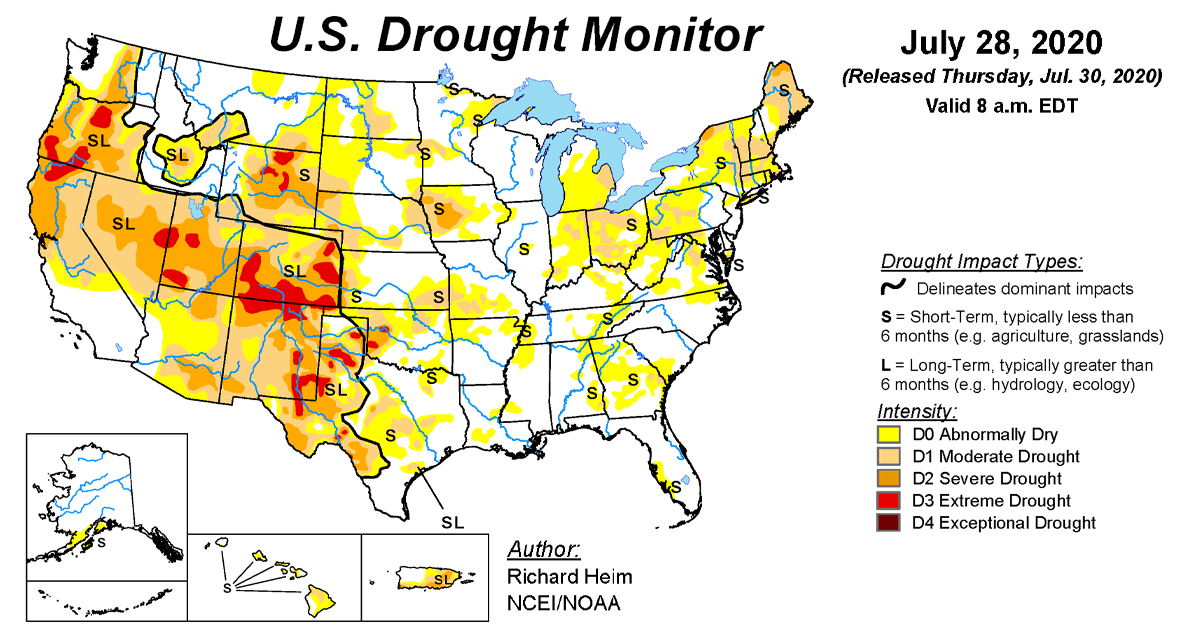