The strong ridge of high pressure, which became established over the central part of the contiguous United States last week, shifted westward. Upper-level troughs slammed into the ridge and were deflected to the north to ride over the top of the ridge. These Pacific weather systems moved into more favorable conditions over the eastern contiguous United States. The upper-level circulation pattern averaged for the week consisted of a ridge over the western U.S., centered over the Southwest, and a trough over the East. The ridge kept the West and much of the Great Plains warmer and drier than normal. The upper-level trough funneled cool Canadian air masses into the eastern U.S., where the week ended up near to cooler than normal.

Some of the fronts and their associated surface low-pressure systems brought above-normal precipitation to parts of the Midwest, while the fronts and tropical system Claudette gave much of the Southeast above-normal rainfall. Drought and abnormal dryness contracted in parts of the Southeast and Midwest where beneficial rains fell, but expanded or intensified in parts of the central to northern Rockies, Great Plains, Mid- to Upper-Mississippi Valley, and New England. Expansion exceeded contraction, so the nationwide moderate to exceptional drought area rose this week.

Abnormal dryness and drought are currently affecting over 132  million people across the United States including Puerto Rico—about 42.6% of the population. 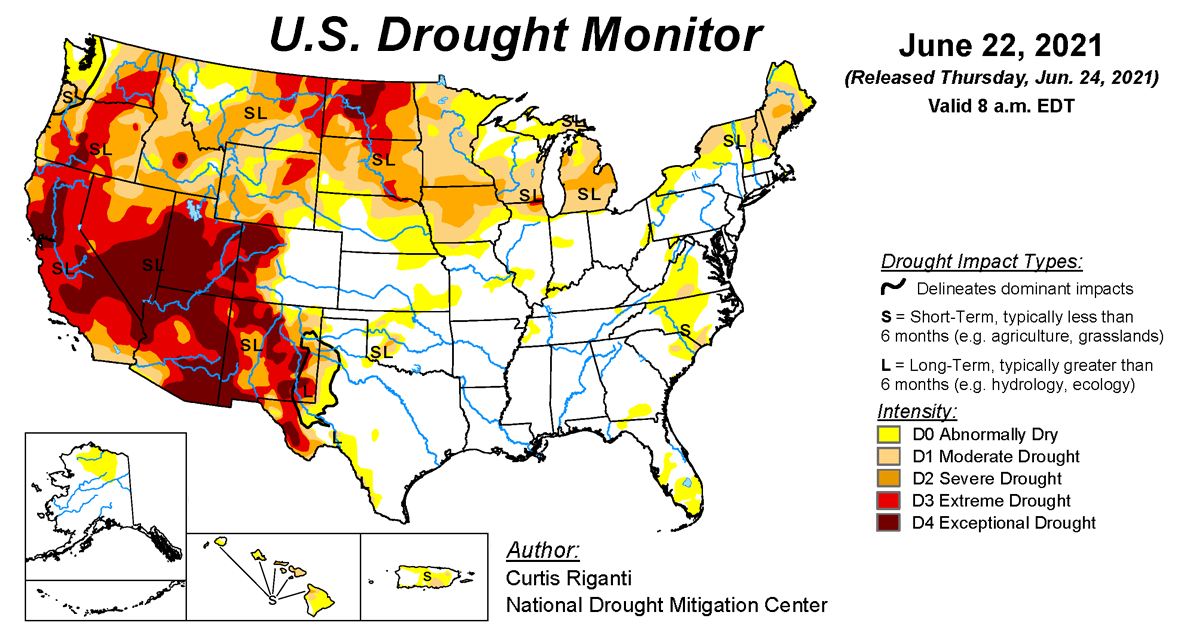 According to the June 22, 2021, U.S. Drought Monitor, moderate to exceptional drought covers 39.9% of the United States

According to the October 15, 2019, U.S. Drought Monitor, moderate to extreme drought covers 18.5% of the United States including

A Special Report on Climate Science

The U.S. Global Change Research Program’s (USGCRP) Climate Science Special Report (CSSR), which serves as Volume I of the Fourth

According to the April 14, 2020, U.S. Drought Monitor, moderate to exceptional drought covers 12.1% of the United States