The week was dominated by an upper-level trough over the central contiguous United States (CONUS) with upper-level ridges off the West Coast and East Coast. Several Pacific weather systems moved through this upper-level flow. They brought rain and snow to coastal parts of Oregon, Washington, and northern California, as well as parts of the Rocky Mountains.

But a dominant northwesterly flow over the western CONUS left most of the West with a drier-than-normal week. Cold Canadian air was pulled southward behind the weather systems as they moved eastward, spreading below-normal temperatures over most of the CONUS, with the coldest air sweeping across the Great Plains and Upper Midwest. The northwesterly flow aloft, in combination with cold and dry Canadian air, gave the Great Plains to Midwest a drier-than-normal week.

However, fronts and surface low pressure systems, that were associated with the upper-level weather systems, tapped Gulf of Mexico and Atlantic moisture to spread rain and snow across southern and eastern sections of the country. As a result, weekly precipitation amounts were above normal from the Lower Mississippi Valley and Gulf Coast to the Mid-Atlantic Coast.

Drought or abnormal dryness contracted in parts of the Pacific Northwest, Lower Mississippi Valley, Southeast, and New England where precipitation was above normal. Drought or abnormal dryness expanded or intensified across other parts of the West and parts of the central and southern Plains, southern Florida, and Hawaii. Drought intensity worsened, with the severe to exceptional drought area increasing, but the overall national moderate to exceptional drought footprint decreased slightly this week.

Abnormal dryness and drought are currently affecting over 167 million people across the United States including Puerto Rico—about 53.7% of the population. 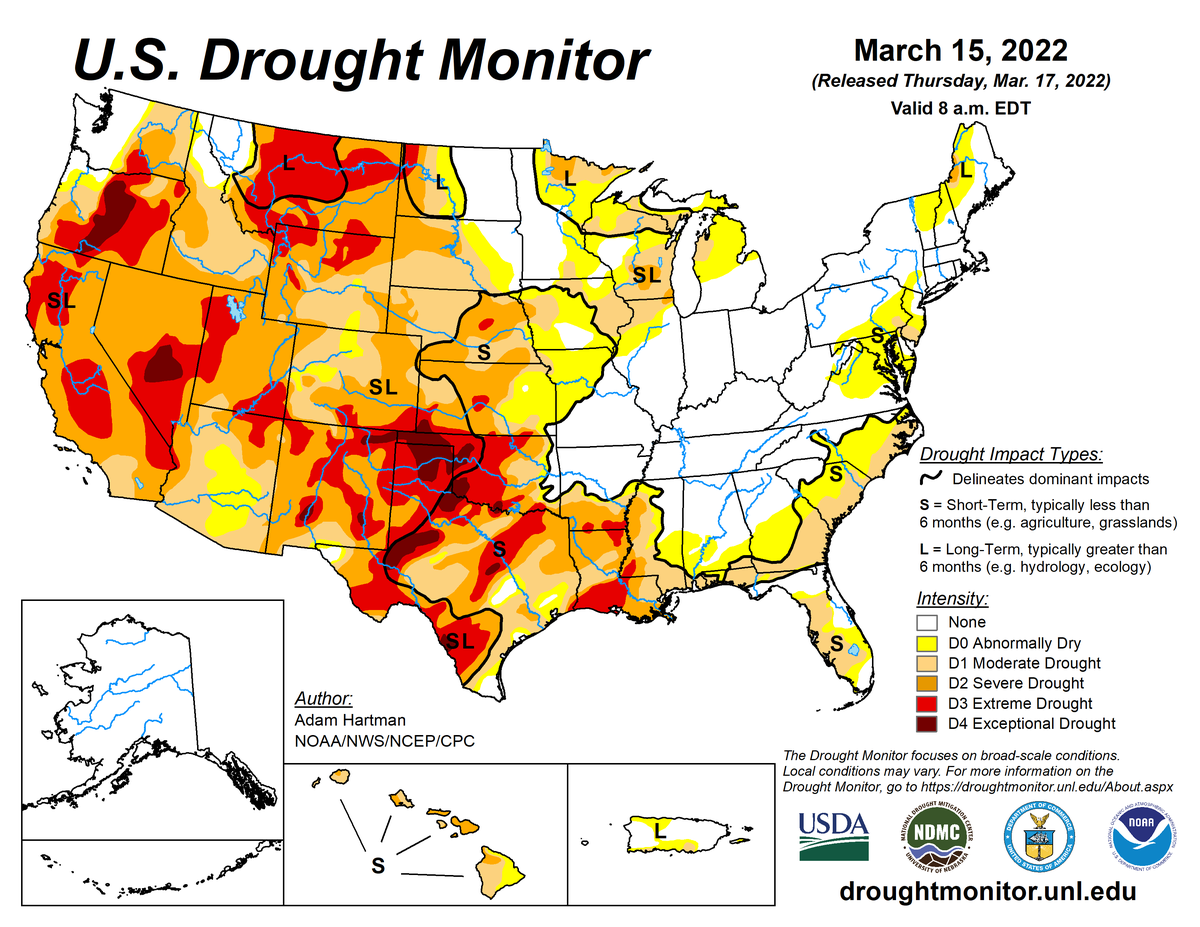 According to the July 28, 2020, U.S. Drought Monitor moderate to extreme drought covers 27.4% of the United States including

According to the May 10, 2022, U.S. Drought Monitor, moderate to exceptional drought covers 44.4% of the United States including

According to the May 30, 2017, U.S. Drought Monitor, moderate to extreme drought covers 5.3% of the contiguous United States, an