According to the March 3, 2020, U.S. Drought Monitor, moderate to extreme drought covers 9.6% of the United States including Puerto Rico, an increase from last week’s 8.5% The worst drought categories (extreme to exceptional drought) increased from 0.2% last week to 0.4% this week.

Upper-level circulation was dominated by a strong high-pressure ridge over the eastern North Pacific that split the jet stream flow downstream, forcing some Pacific weather systems to move over the Pacific Northwest and British Columbia and others to track across Baja California and the southwestern contiguous United States. These weather systems combined as they moved across the eastern half of the country, resulting in a deep upper-level trough over the eastern contiguous United States.

Precipitation was wetter than normal beneath the trough from the Ohio and Tennessee Valleys to New England, but drier than normal across most of the rest of the contiguous United States where a dry northwesterly flow dominated at jet stream levels. The movement of Pacific and Canadian air masses behind the weather systems left a mixed pattern of warmer- and colder-than-normal temperatures across the contiguous United States. Drought and abnormal dryness expanded or intensified across parts of the West, southern Texas, and the Colorado High Plains where dry weather has persisted for the last several weeks.

Abnormal dryness and drought are currently affecting over 50 million people across the United States including Puerto Rico—about 16.3% of the population. 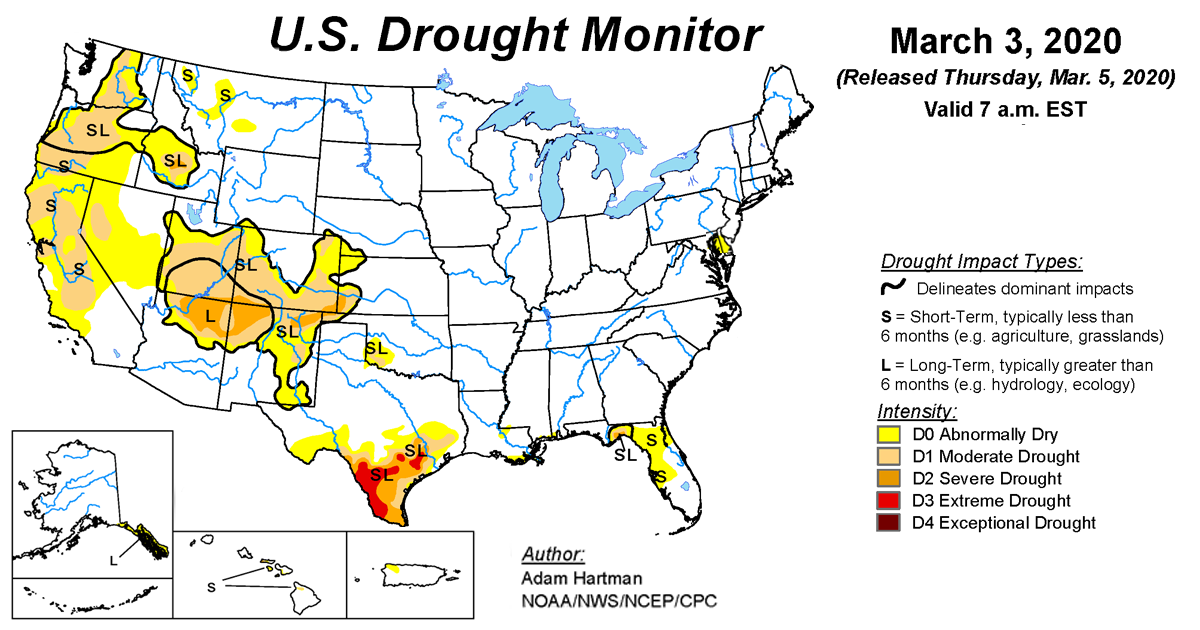 It’s hard to miss a hurricane, given that storm forecasts dominate news coverage for as much as a week in advance of landfall

The full U.S. Drought Monitor weekly update is available from Drought.gov. In addition to Drought.gov, you can find further