A series of Pacific weather systems traversed the contiguous United States (CONUS) during this USDM week (May 4-10). They moved quickly through a westerly jet stream flow, bringing snow to high elevation areas of the Pacific Northwest and northern Rockies and rain to parts of the Plains and East. Areas with above-normal precipitation included the Pacific Northwest to northern Rockies, much of the central to northern Plains, parts of the southern Plains to Mississippi Valley, and the central Appalachians to Mid-Atlantic Coast. The weather systems’ surface lows and fronts also brought cooler-than-normal temperatures for the week to the Pacific Northwest and northern California, and from the Ohio Valley to the Mid-Atlantic Coast and Northeast. The storm track missed the Southwest, Great Lakes, Northeast, Southeast, and much of Montana, where the week was drier than normal.

Lack of rain in the Southwest was accompanied by unseasonably warm and windy conditions which exacerbated fire-weather conditions and fed several large wildfires. A shift in the circulation pattern came near the end of the week as a deep upper-level low pressure trough strengthened over the West Coast. In response, a strong upper-level ridge built up from the southern Plains to the Great Lakes and an upper-level low pressure system stalled over the Atlantic Ocean just off the East Coast. The ridge contributed to weekly temperatures that averaged near to above normal across the Plains and Southeast, and much above normal over the Southwest and southern Plains.

Like last week, much of the precipitation fell across drought areas, with drought or abnormal dryness contracting or decreasing in intensity in parts of the Pacific Northwest, Great Plains, Lower Mississippi Valley, and central Appalachians. Drought or abnormal dryness expanded or intensified where precipitation deficits increased, especially across parts of the Southwest, southern Plains, and Southeast. Contraction exceeded expansion, with the nationwide moderate to exceptional drought area decreasing this week, but the area with the most intense drought (extreme to exceptional drought) increased this week.

Abnormal dryness and drought are currently affecting over 122 million people across the United States including Puerto Rico—about 39.2% of the population. 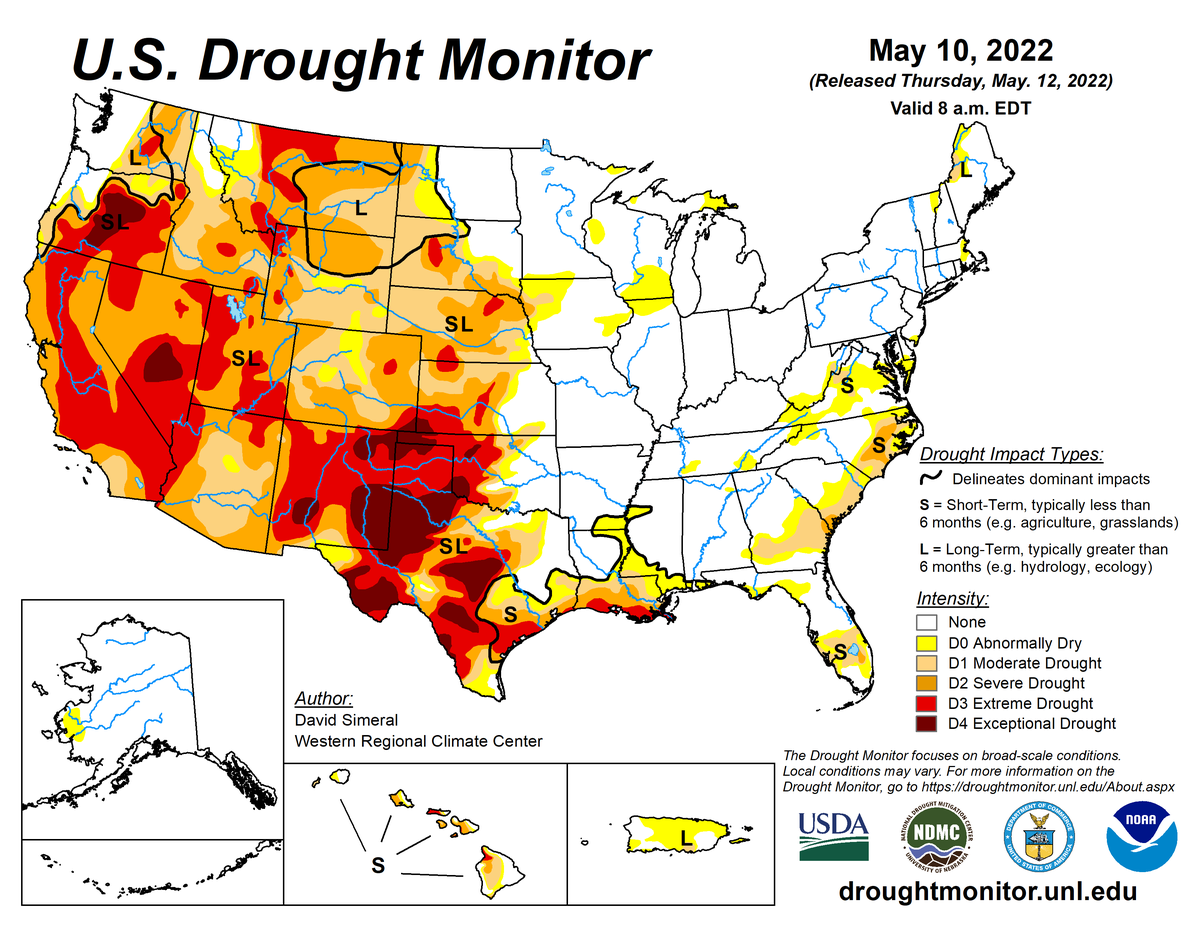 According to the May 1, 2018, U.S. Drought Monitor, moderate to exceptional drought covers 28.6% of the contiguous United States

According to the March 5, 2019, U.S. Drought Monitor, moderate to exceptional drought covers 10.4% of the United States, a