According to the U.S. Drought Monitor report for May 11, the U.S. drought footprint now stands at 38.6%.

The overall upper-level circulation pattern consisted of an upper-level ridge over the western contiguous United States with a deep trough over the eastern contiguous United States extending into eastern Canada. Pacific weather systems moved through this flow, undercutting the western ridge and intensifying as they moved into the eastern  trough, but the ridge was strong enough to inhibit precipitation over the West.

A northerly flow over central portions of North America, which was associated with the eastern trough, funneled cold Canadian air masses into the contiguous United States east of the Rockies, resulting in below-normal temperatures for most of the country. Only the Southwest and portions of the Gulf of Mexico coast averaged warmer than normal for the week.

Other areas east of the Rockies were drier than normal, especially the Upper Mississippi Valley to western Great Lakes, other parts of the Plains, and the southern to central Atlantic coast. Abundant rain fell across several drought areas, so drought or abnormal dryness contracted across much of the southern Great Lakes states to Northeast, and parts of the central Rockies to southern Plains. However, drought or abnormal dryness expanded or intensified across parts of the Far West, other parts of the central and southern Plains, and Mid-Atlantic states. Contraction exceeded expansion, so the moderate to exceptional drought area shrank slightly this week. 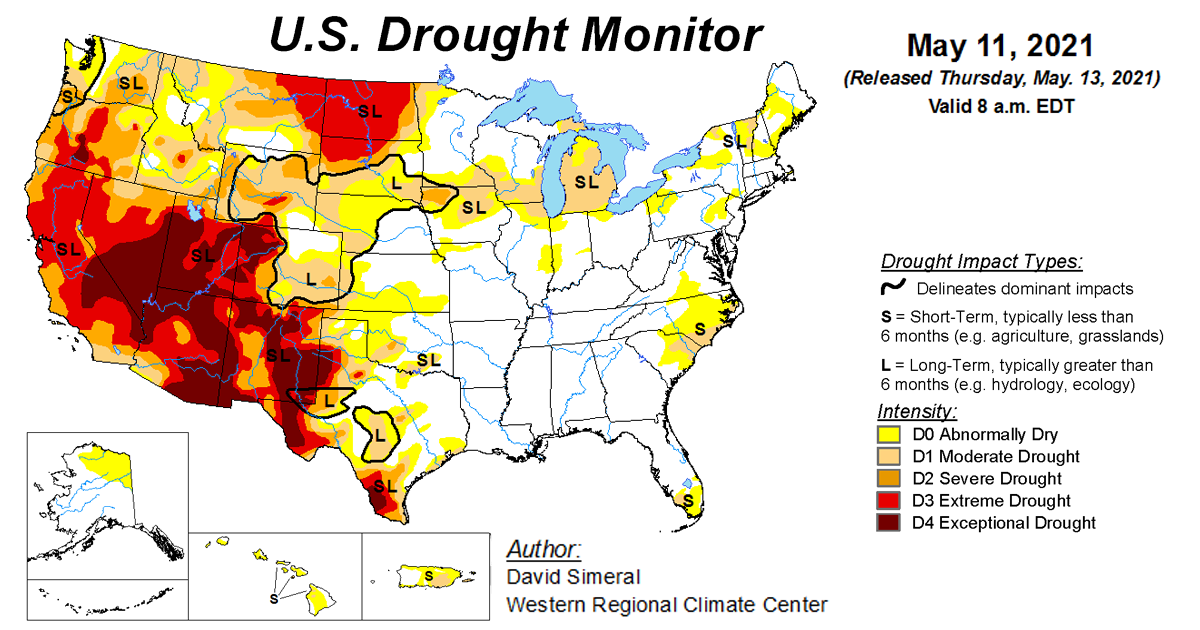 According to the August 9, 2022, U.S. Drought Monitor, moderate to exceptional drought covers 42.0% of the United States

According to the April 27, 2021, U.S. Drought Monitor, moderate to exceptional drought covers 40.4% of the United States

According to the December 7, 2021, U.S. Drought Monitor, moderate to exceptional drought covers 46.5% of the United States