According to the May 14, 2019, U.S. Drought Monitor, moderate to severe drought covers 2.4% of the United States, a slight decrease from last week’s 2.5%. The worst drought categories (extreme to exceptional drought) were at 0% for the eighth week in a row.

A large trough of low pressure dominated the jet stream flow during this U.S. Drought Monitor week. It started the week over the southwestern contiguous United States, then slowly migrated eastward to end the week over the Northeast. A series of weather systems tracked through this flow, bringing above-normal precipitation to parts of the Southwest, southern Plains to Southeast, Upper Midwest, and Northeast. The trough funneled cold Canadian air masses across the Plains and into the South and East, with their fronts enhancing the precipitation.

An upper-level ridge in the jet stream flow dominated the Pacific Northwest, where the week was warmer and drier than normal. The Bermuda High kept the Southeast warmer than normal for much of the week before the trough shifted east and allowed cold fronts to penetrate the region. As a result, drought and abnormal dryness contracted in the Southwest to Southeast under the continued wet conditions, but expanded in the Pacific Northwest and part of the North Carolina coast. A persistent dry trade-wind regime kept the northern and western U.S.-Affiliated Pacific Islands dry, where moderate to exceptional drought continued.

Abnormal dryness and drought are currently affecting over 24 million people across the United States—about 8% of the country’s population. 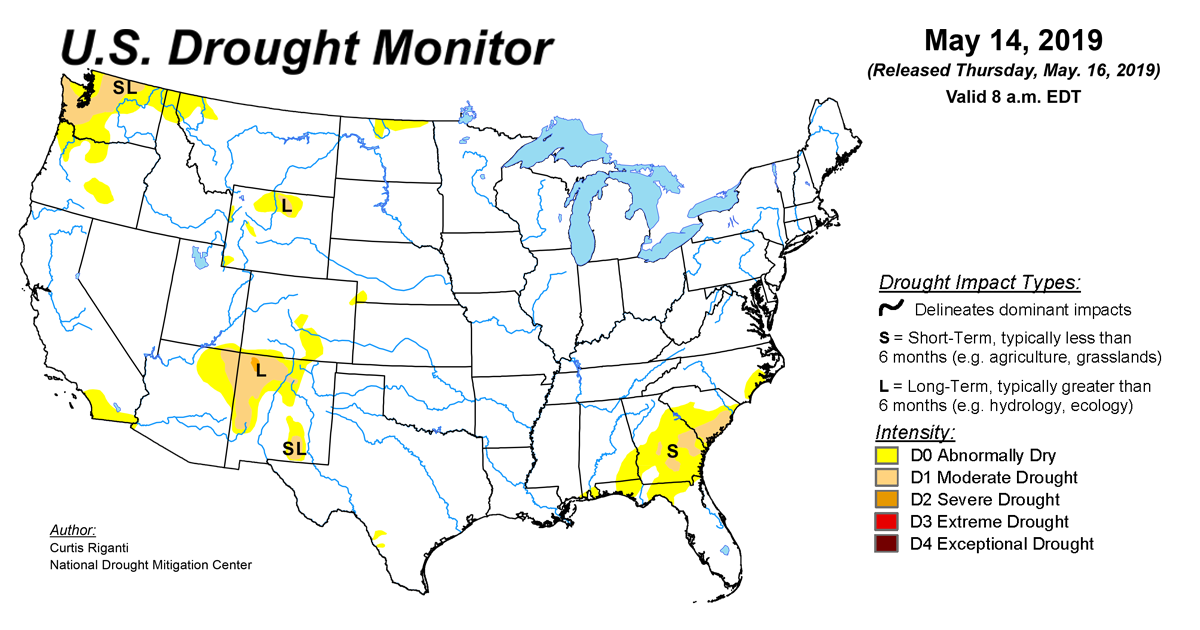 According to the August 15 U.S. Drought Monitor, moderate to extreme drought covers 11.3% of the contiguous U.S.

According to the April 25 U.S. Drought Monitor, moderate to extreme drought covers 6.1% of the contiguous U.S.

According to the March 20 U.S. Drought Monitor, moderate to exceptional drought covers 31.0% of the contiguous U.S.