According to the May 29, 2018, U.S. Drought Monitor, moderate to exceptional drought covers 22.1% of the United States, a slight decrease from last week’s 22.3%. Extreme and exceptional drought—the worst categories—also contracted slightly to cover 7.7% of the nation, down from 7.9% last week.

Like most of May, a broad-scale high pressure ridge in the upper atmosphere continued to dominate the weather over the contiguous United States during this U.S. Drought Monitor week, bringing another week of above-normal temperatures to much of the country. And like previous weeks, upper-level weather systems from the Pacific crashed into the ridge, getting bogged down over the West.

The Pacific systems and their surface fronts brought above-normal precipitation to parts of the Far West, northern Rockies, central to northern High Plains, and Upper Mississippi Valley, before falling apart or being forced to move into Canada. Their clouds and fronts also brought cooler-than-normal temperatures to California and parts of Arizona and Nevada. But, the high pressure ridge kept the rest of the West, Plains, and Midwest, as well as New England, drier than normal.

A weak weather system was moving out of the East as the week began, with mostly dry fronts lingering along the Great Lakes to Northeast for the rest of the week. As the week ended, Sub-Tropical Storm Alberto challenged the ridge when it crossed the Gulf of Mexico and slowly moved into the Southeast. The system pulled in abundant tropical moisture from the Gulf of Mexico and Atlantic Ocean.

Widespread heavy precipitation with localized flooding resulted from the general uplifting motion and convergence associated with Alberto, as well as orographic intensification as the moisture flowed up the Appalachian Mountains. As a result, drought and abnormal dryness were virtually eliminated in the Southeast, while parts of the Plains saw contraction of drought and other parts expansion of drought.

Abnormal dryness and drought are currently affecting nearly 78 million people across the United States—about 25% of the country’s population. 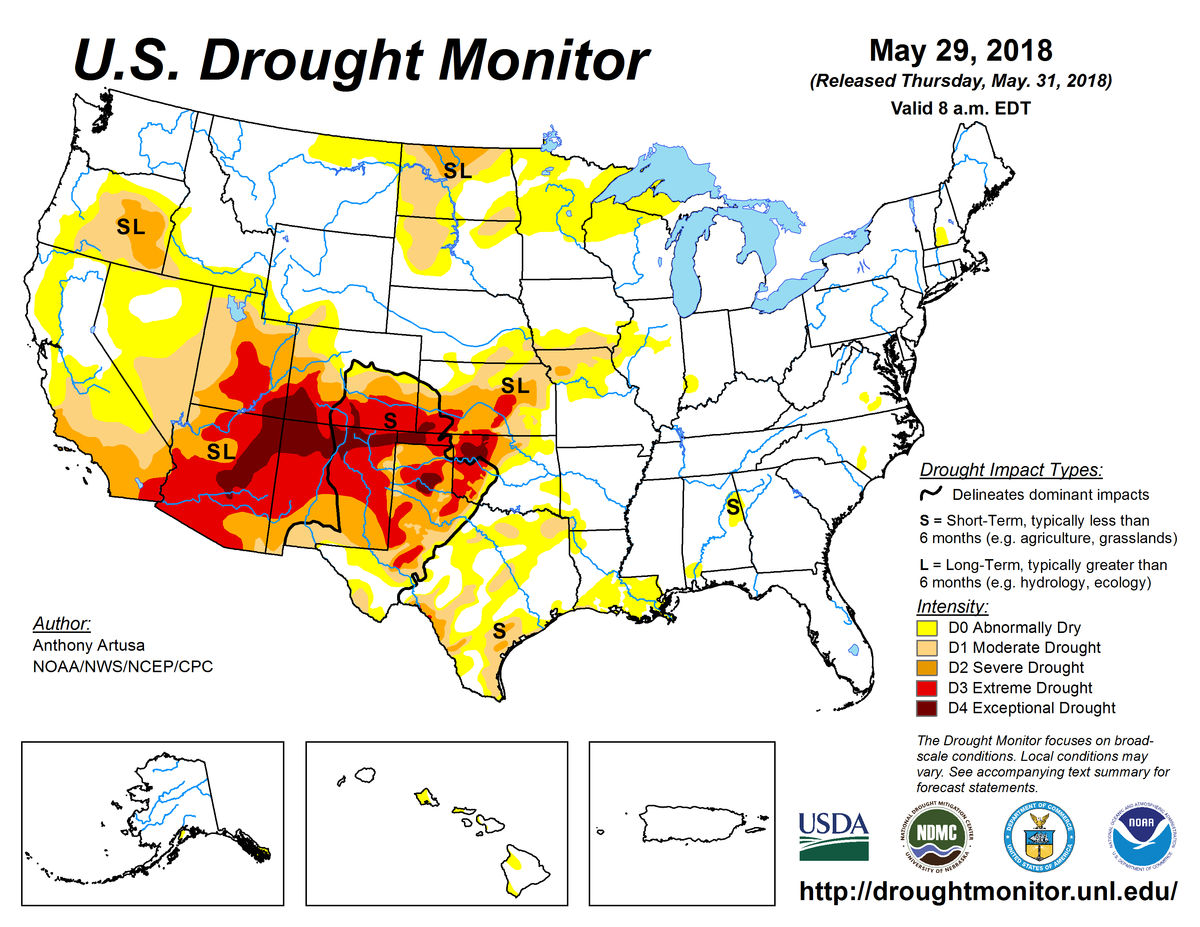 During November, the average contiguous U.S. temperature was 45.1°F, 3.4°F above average.

According to the August 11 U.S. Drought Monitor, moderate to extreme drought covers 28.8% of the United States including Puerto Rico.